“Let me, let me sleep again” 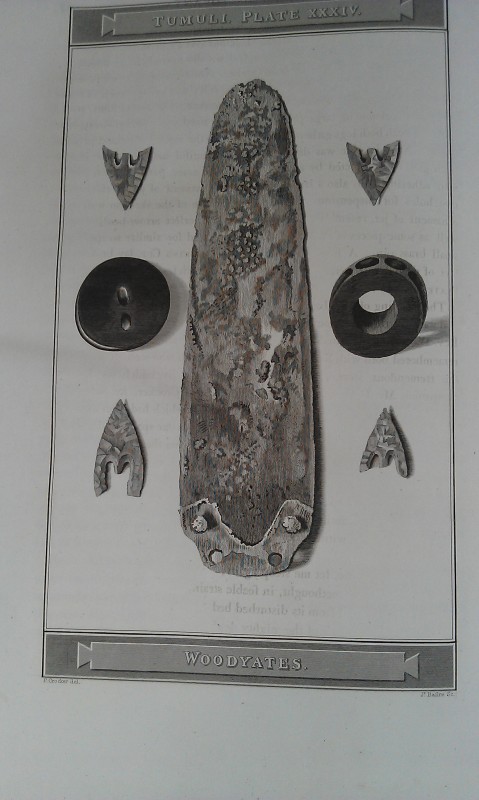 WRITTEN BY Austin Kinsley ON 09/08/14. “Let me, let me sleep again” POSTED IN Stonehenge

Sir Richard Colt Hoare is often cited as one of the founding fathers of modern archaeological methods. With William Cunnington, in the early 19th century, he excavated 379 barrows on Salisbury Plain, as well as digging around a fallen trilithon and the Slaughter Stone at Stonehenge. His findings were meticulously recorded (for the time) and published partially in the 1812 publication The Ancient History of Wiltshire, which begins and ends with the words ‘We speak from facts not theories’. On the bicentenary of the publication of this seminal publication, Angie Wickenden wrote a celebration of it which can be read here.

As well as excavating the well-known barrows at — and surrounding — Stonehenge, he also dug the barrows shown on the map below at Woodyates, described by Colt Hoare as ‘upon the limits of the adjoining county of Dorset.’ 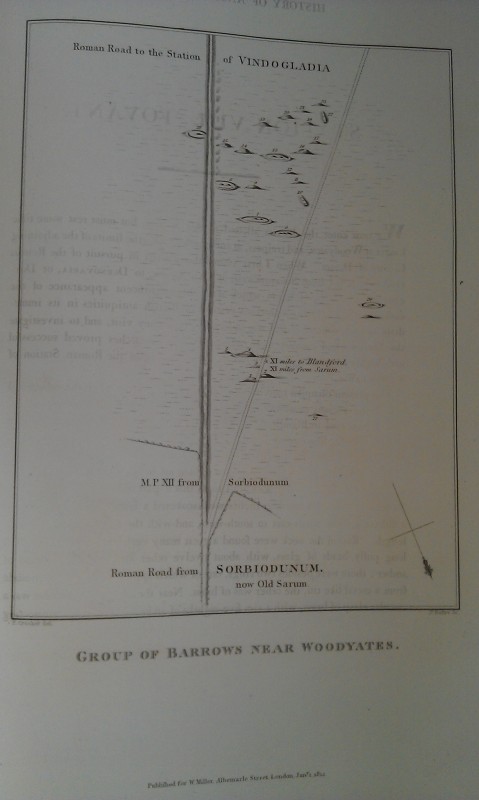 Describing the Woodyates barrows, he states, ‘On quitting the lane, and entering the down, the modern road to Blandford bears away to the right, whilst the Roman road follows a direct line over the Downs, and presents a very bold and perfect ridge. In the angle formed by the old and modern roads, is a very fine group of barrows’. The Roman road described runs from Old Sarum to Dorchester, Sorbiodunum to Durnovaria.

A number of the barrows were opened, and during the excavation of number 9 above, those present jointly witnessed an extraordinary event which is summarised below directly from Colt Hoare’s publication:

“No.9. In this fine bell-shaped barrow, at the depth of about eighteen inches under the surface, we found two skeletons lying northeast and southwest, and apparently placed one above the other. At the head of the uppermost was a drinking cup of soft pottery rudely ornamented, and the fragments of another cup of still ruder texture and workmanship. On the eastern side of the tumulus, and near the feet of the skeleton, was a large heap of burned bones piled up together without any cist. Under the skeletons were a considerable quantity of flints, which led us to suppose that we had not discovered the primary internment; we therefore continued our researches amongst the flints where we perceived large pieces of stags horns, and half a stone celt; and at a depth of eleven feet, after the very laborious removal of an immense collection of flints, we discovered a skeleton of large proportions lying northeast by southwest on his left side, with both legs gathered up according to the mutual ancient and primitive usage. Near its side was deposited a most beautiful brazen dagger, that had been gilt and protected by a wooden scabbard, some part of which was seen adhering to it, also a large and small ornament of jet, perforated with two holes for suspension. Near the thigh bone of the skeleton was another ornament of jet, resembling a pully (Colt Hoare’s spelling), four very perfect arrowheads of flint as well as some pieces of flint chipped and prepared for similar weapons, and a small brass pin. A fine urn, probably the drinking cup, lay broken at the feet of this British hero”. A selection of these articles is engraved in tumuli plate XXXIV above.”

“The opening of this barrow was attended by so many awful circumstances, and gave birth to so beautiful and truly descriptive a poem, by my friend the Rev.William Lisle Bowles, who attended our operations, that it will ever be remembered both with horror and pleasure by those who were present. During the tremendous storm of thunder and lightning by which my friend and companion Mr Fenton, my surveyor Mr Philip Crocker &c,&c were surprised, our only place of refuge was the barrow, which had been excavated to a considerable depth; the lightning flashed upon our spades and iron instruments, and the large flints poured down upon us from the summit of the barrow so abundantly and so forcibly, that we were obliged to quit our hiding place, and abide the pelting of the pitiless storm upon the bleak and unsheltered Down. Mr Bowles took leave of us the same evening and the next morning sent me the following beautiful and spirited poem, so truly descriptive of the awful scene we had lately witnessed.”

“Let me, let me sleep again;
Thus, methought in feeble strain,
Plain’d from its disturbed bed,
The spirit of the mighty dead.

“Over my moulder’d ashes cold,
Many a century slow hath roll’d,
Many a race hath disappear’d
Since my giant form I rear’d;
Since my flinted arrow flew,
Since my battle horn I blew,
Since my brazen dagger’s pride
Glittered on my warlike side.
Which transported o’er the wave,
Kings of distant ocean gave.
Ne’er hath glared the eye of day,
My death-bed secrets to betray,
Since, with mutter’d Celtic rhyme,
The white hair’d Druid bard sublime,
Mid the stillness of the night,
Wak’d the sad and solemn rite,
The rite of Death, and o’er my bones
Were piled the monumental stones ”

Passing near the hallowed ground,
The Roman gaz’d upon the mound
And murmur’d with a secret sigh,
‘There in dust the mighty lie.’

Ev’n while his heart with conquest glow’d,
While the high-raised flinty road,
Echoed to the prancing hoof,
And golden eagles flamed aloof,
And flashing to the orient light
His banner’d legions glitter’d bright;
The vistor of the world confess’d
A dark awe shivering in his breast.

“Shall the sons of distant days,
Unpunish’d on my relicks gaze?
Hark! HESUS rushes from on high,
Vindictive thunder rocks the sky,
See TARANIS descend to save
His heroe’s unviolated grave,
And shakes beneath the lightenings glare,
The sulphur from his burning hair.
Hence! yet though my grave ye spoil,
Dark oblivion mocks your toil:
Deep the clouds of ages roll,
History drops her mould’ring scroll,
And never shall reveal the name
Of him, who scorns her transient fame”

Such questions of conscience invade our thoughts to this day. This Durotriges leader taunted those that are too now long gone and defiled his final resting place in the early 19th century with a universal truth, ‘dark oblivion remains to mock’ our toil too. 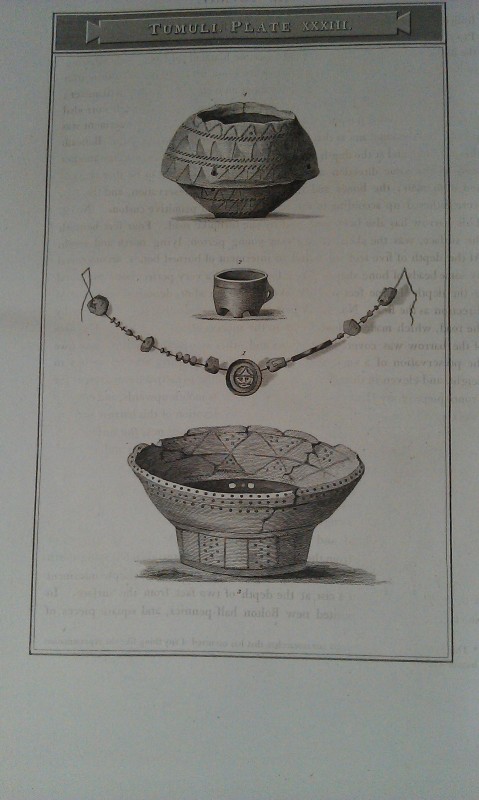 The above plate is of a number of other finds excavated from the barrows in the map above at Woodyates, including ‘a great many very small glass beads, twelve other beads rudely formed of amber’ from a female skeleton lying at two feet four inches under the surface of barrow one,  lying NE to SW with the limbs extended at full length. He went on to say ‘Near the ear or left shoulder was a circular clasp of brass…stamped or cut within the rude figure of a human face. Colt Hoare’s image of this is included in the above Plate XXX111 marked by the number 1.

Sir Richard Colt Hoare was an enlightened man with a deep purse, driven by a passion for British and Irish prehistory and for the truth. The archive he has bestowed upon us today is truly astounding for its time. I for one, still wrestle with my own conscience over the manner by which he achieved it.