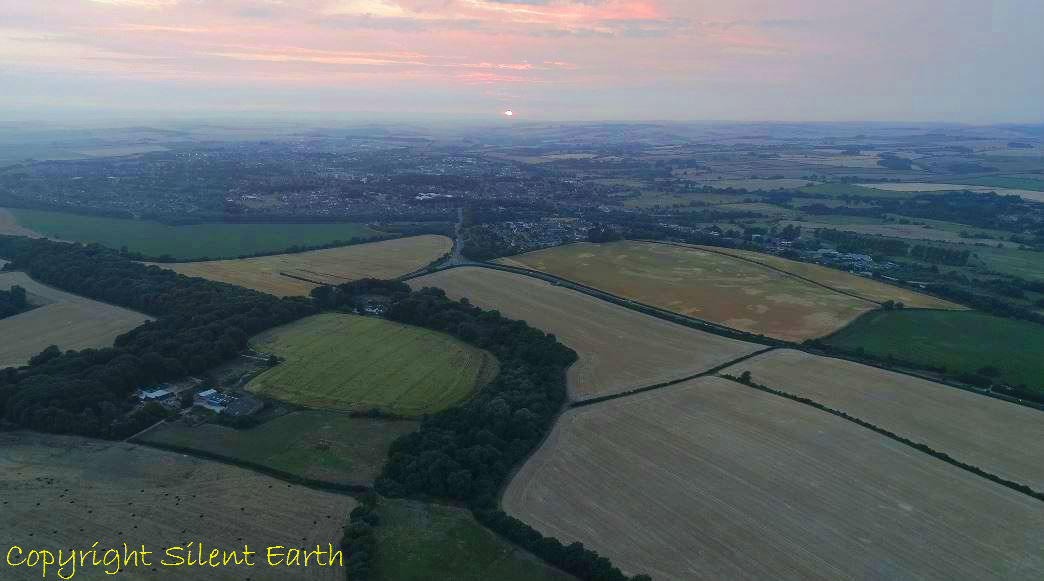 WRITTEN BY Austin Kinsley ON 13/09/18. Mount Pleasant in Wessex POSTED IN Dorset

During the recent dry spell in the summer of 2018 Silent Earth filmed the Mount Pleasant of Wessex prehistoric site and its environs from the air. As there is little to see from ground level and the field remains under plough to this day, this enigmatic site on which the known activities of man span the first half of the third millennium BC through to Saxon times is much overlooked. Here at the heart of Hardy’s Wessex on the southeastern outskirts of Dorchester (and 600 metres to the west, Thomas Hardy’s house at Max Gate) is a complex site that played a significant role in the evolution of the peoples of Wessex over millennia.

Below: The prehistoric complex lies in the upper centre of this photograph on a gentle upland spur of soft flintless upper chalk at the north of the Winterbourne valley on Mount Pleasant Hill, which runs approximately east-west. The river Frome is to the right here on the northern side of the site and, as can be seen from this photograph taken from the north east, the hill is in a prominent location on the southeastern outskirts of what is now Dorchester, the county town of Dorset with the Winterbourne Valley to its south and the Frome Valley to the north. 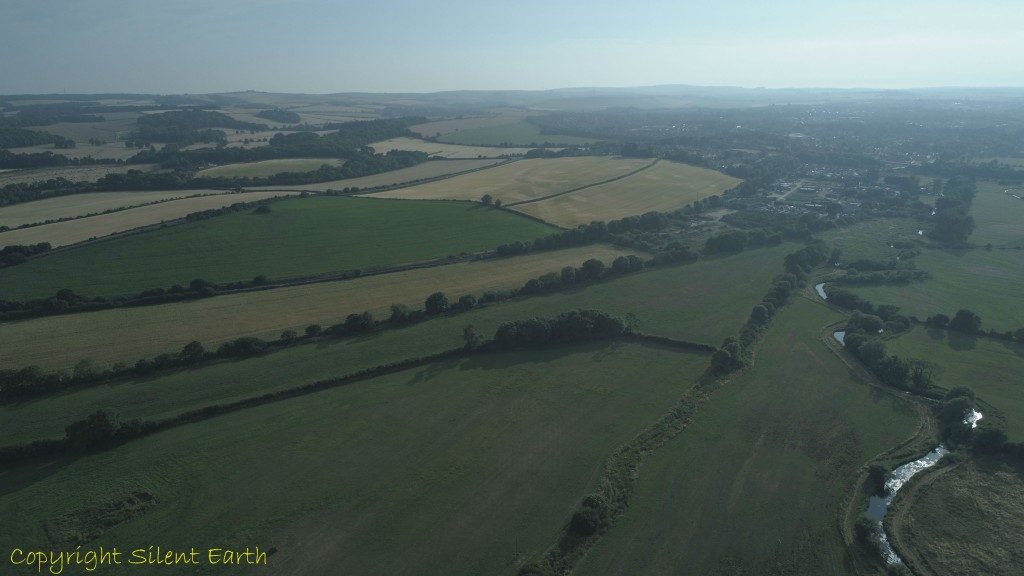 The first antiquarian mention of the Mount Pleasant site was by Charles Warne in his 1872 publication Ancient Dorset as, ‘the vestiges of a large rectangular encampment, which I hold to have been Vespasian’s Camp, thrown up and occupied by him preparatory to his advance on the fortified heights of Dunium’, (Maiden Castle, which is 4.3km to the southwest.)

Below: This photograph taken from the southeast reveals a number of the prehistoric features on Mount Pleasant Hill. On first viewing this image, one’s eyes are drawn to the distinctly circular feature sited to the south of the highest part of the hill. Dr. G.J. Wainwright carried out excavations at the site in 1970-71, which are comprehensively summarised in the 1979 publication by The Society of Antiquaries of London, ‘Mount Pleasant, Dorset: Excavations 1970-71’. Dr. Wainwright named this area ‘Site IV’, excavating the whole feature, with the exception ‘of a slither of ditch in its east sector’ and summarises his discoveries in the above publication as follows: 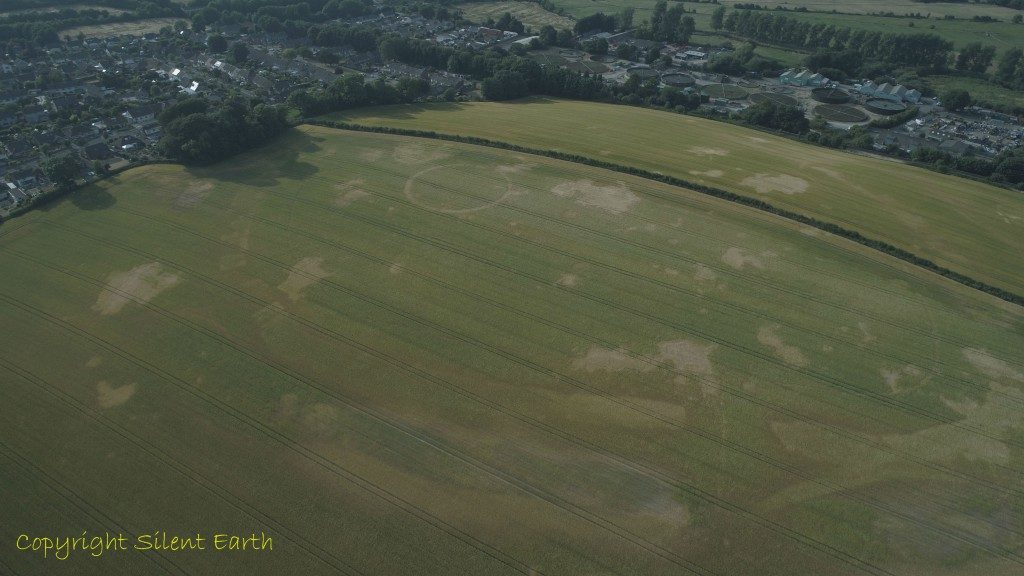 Dr. Wainwright observed that the circular timber structure he discovered here is similar to those recorded at Durrington Walls, Woodhenge and the Sanctuary on Overton Hill near Avebury. In 1997, some 18 years after Dr Wainwright published the results of his excavations on Mount Pleasant Hill, English Heritage, in whose care Stanton Drew stone circle in Somerset is vested, carried out a detailed magnetometer survey of Stanton Drew. Historic England on their Pastscape record indicate:

Below: Looking east across site IV and Mount Pleasant Hill. As can be seen in this photograph and observed by Martyn Barber, ‘the whole hilltop features an array of amorphous features’. In an English Heritage remote survey of Mount Pleasant published in 2014, (research report series no. 70-2014) from which the prior quote is taken, Martin Barber writes of these ‘amorphous features’ : 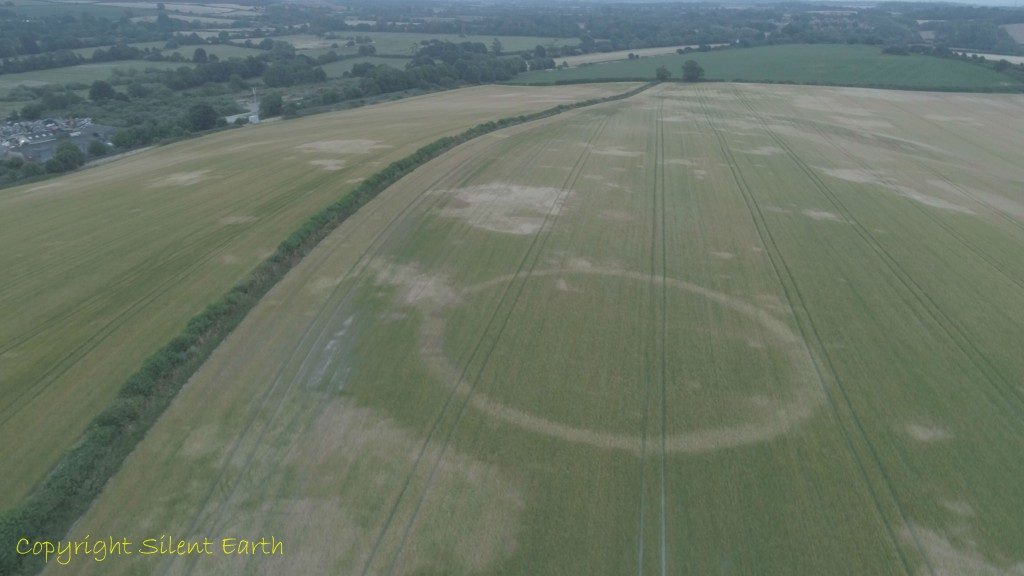 Looking east across site IV and the amorphous features, giving the hill a spotty appearance.

Below: Photographed from the east here, a thin continuous line of the palisade trench which surrounds a substantial part of the hilltop can be seen here on the northern, southern and eastern flanks of the hill. The 1970-71 excavations revealed this trench, which is oval or egg shaped, was of variable width, upwards of 3 metres deep and supported timber uprights of oak between 30-50 centimetres in diameter set close together. The enclosure formed by the palisade occupied the highest point of the spur between the 69 and 72 metre contours. Dr. Wainwright concluded that the palisade ‘follows a line best suited for defensive purposes in that it takes advantage of the natural contours’.

The railway line and sewerage works at the foot of the northern side of Mount Pleasant Hill, between the hill and the nearby River Frome, can be seen here along with houses on the outskirts of Dorchester immediately to the west of the hill. 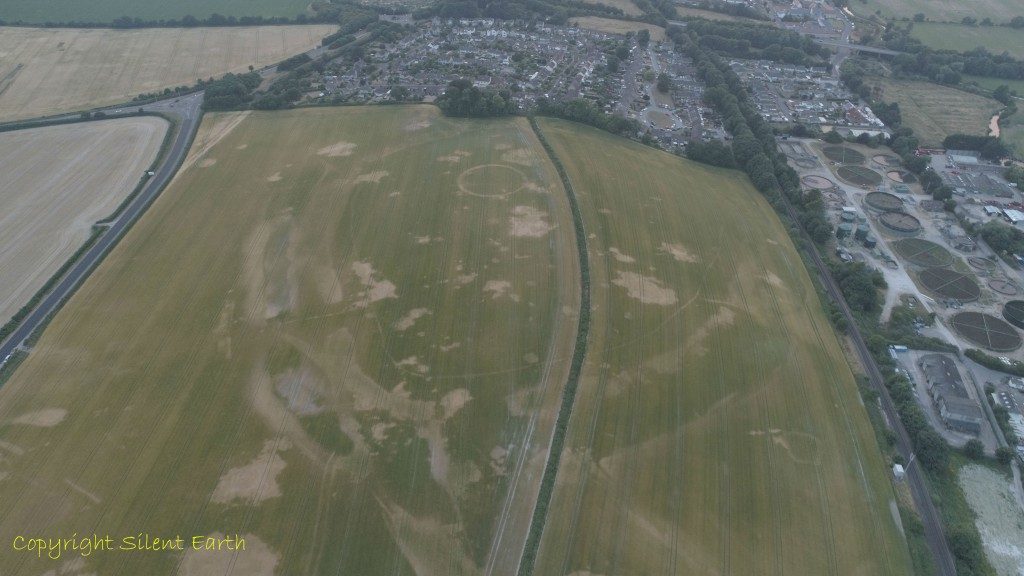 A thin continuous line of the palisade trench is clearly visible here.

Below: This photograph, taken from the northwest, reveals the earthwork enclosure of a henge type, best visible here to the central upper left where a southeastern entrance to the henge enclosure is also clearly visible. Interestingly, too, to the upper left of this photograph is a wide parallel linear feature advancing on the henge enclosure from the northeast. This brings speculative thoughts to mind, such as that it may at one time have represented perhaps a dedicated approach to the hill from the River Frome, much like the Avenue at Stonehenge is a dedicated walkway linking Stonehenge to the nearby River Avon. 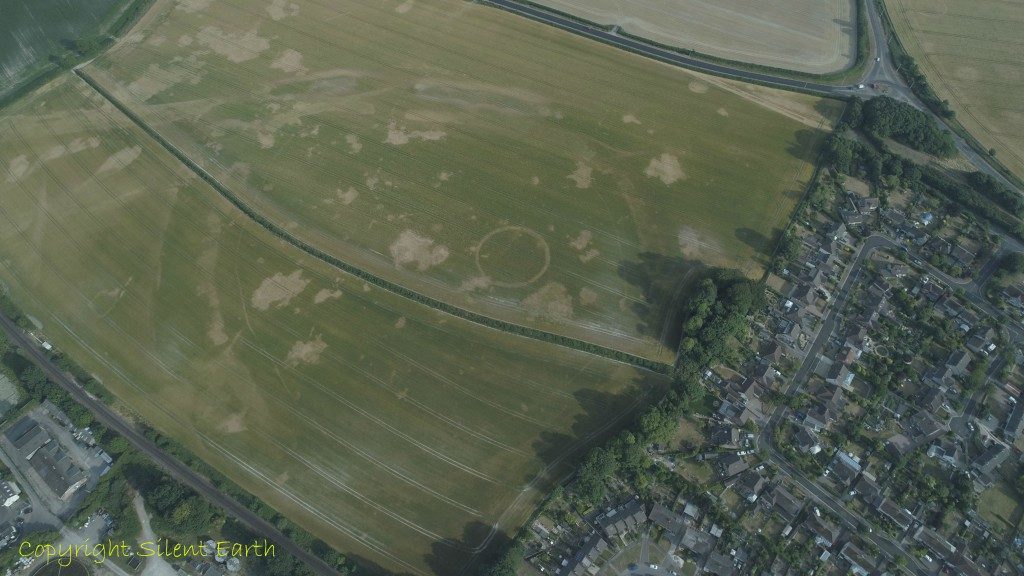 Below: On the northeastern flank of the hill, the possible ‘Avenue approach’ to the henge can be seen as far as the next field to the east. 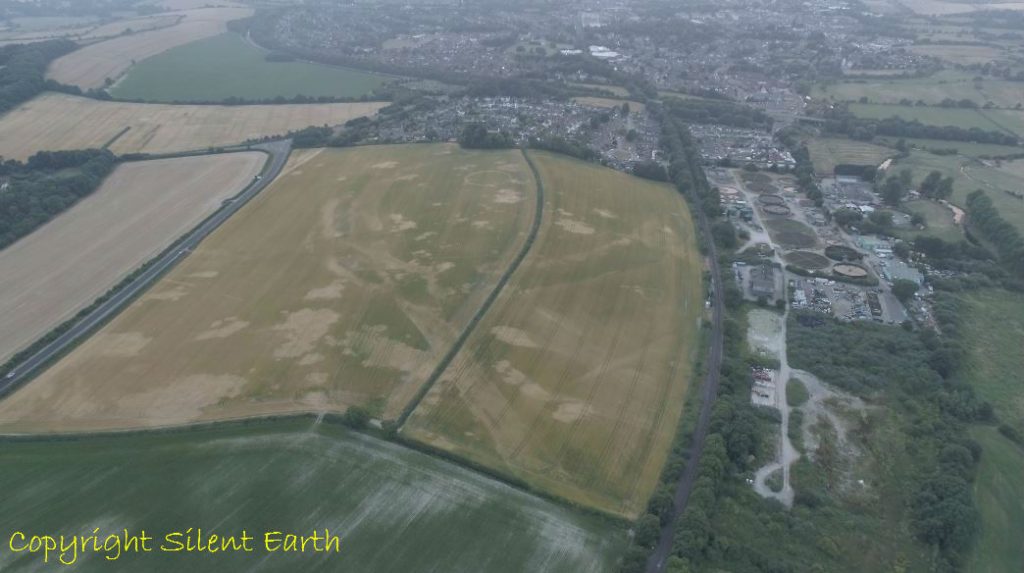 The ‘Avenue approach’ to the henge.

Below: This photograph is taken from the northeast of Mount Pleasant with the River Frome on the right here to the north. The possible ‘Avenue’ walkway from the henge to the river can be seen to the far central left and, interestingly, looking to the lower centre of the photograph, running across a section of the field are two parallel lines heading towards the river. If these are separate elements of the Mount Pleasant Avenue, the question that begs itself is: How do the two elements of the walkway unite? As Carl Sagan once said, ‘Imagination will often carry us to worlds that never were. But without it we go nowhere. 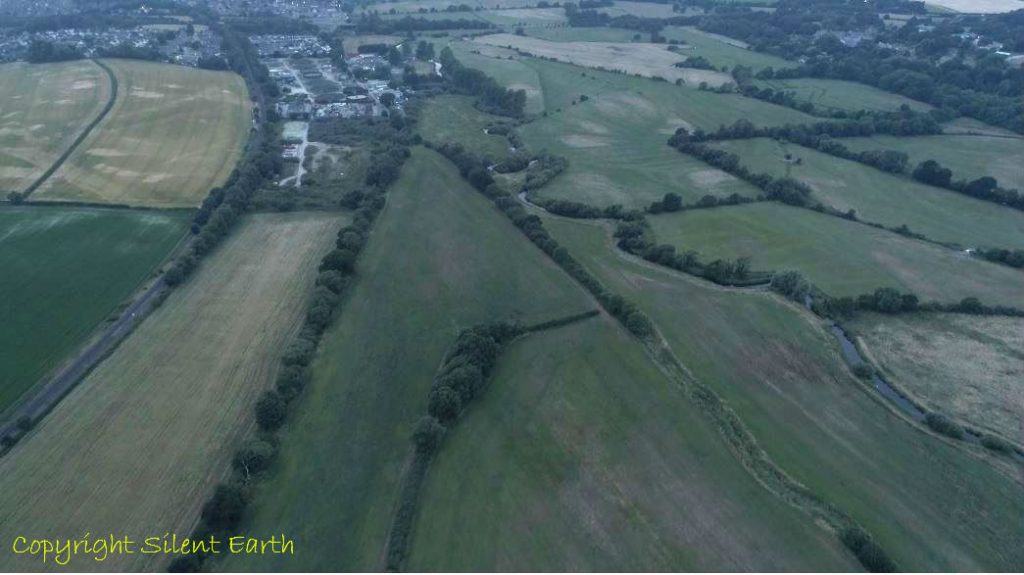 Below: Two ring ditches are visible here in the central foreground lower on the hill to the east, annotated E and F in the English Heritage remote survey of Mount Pleasant carried out by Martyn Barber and published in 2014, (research report series no. 70-2014). The feature on the right (F) is partially obscured by recent farming activity. Lyn Pease  suggests this could possibly be a double ring ditch. 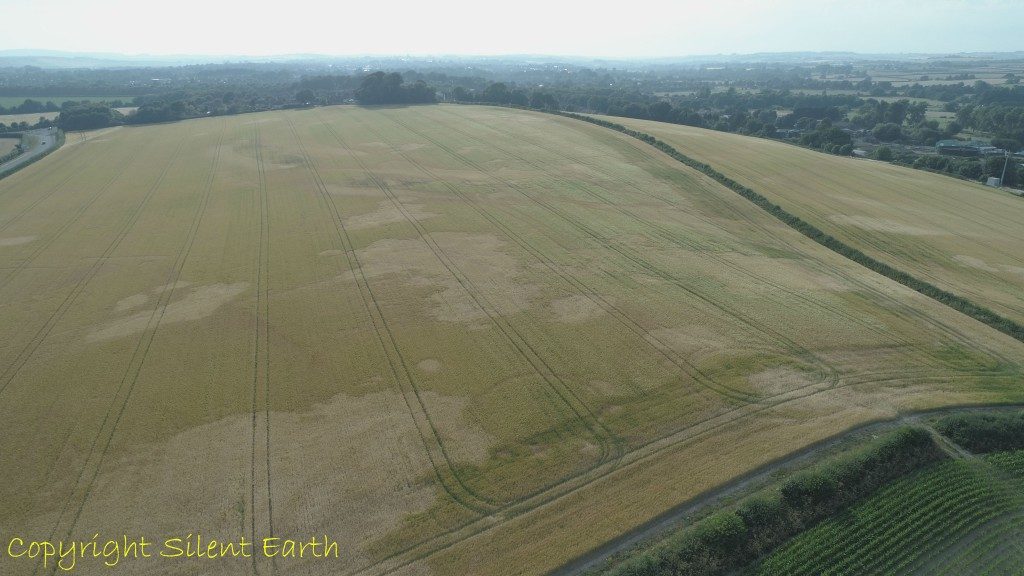 Below: Ring ditches E and F from above. 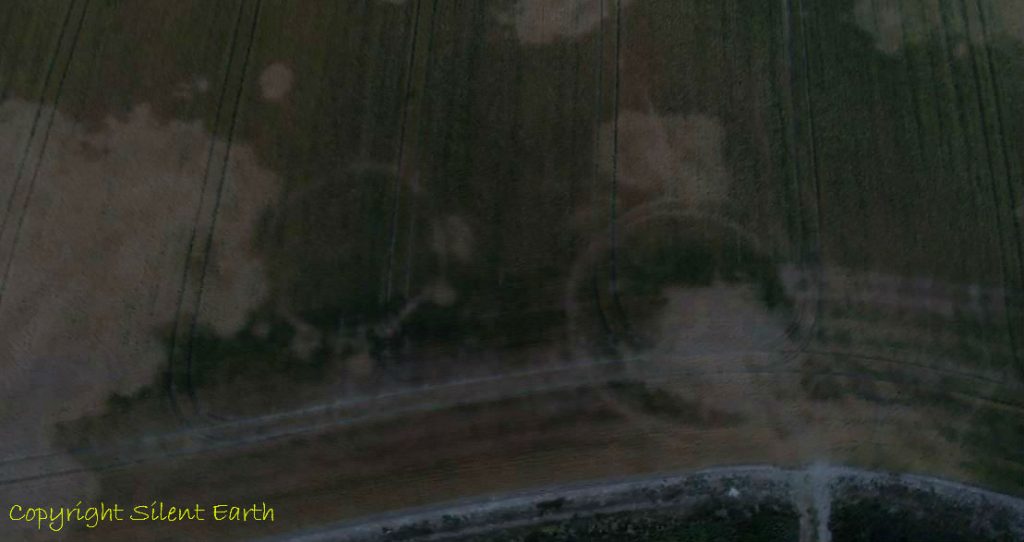 Below: A little further to the east, lower on Mount Pleasant Hill, ring ditches A and B are visible here. C and D were not readily apparent during the visits. 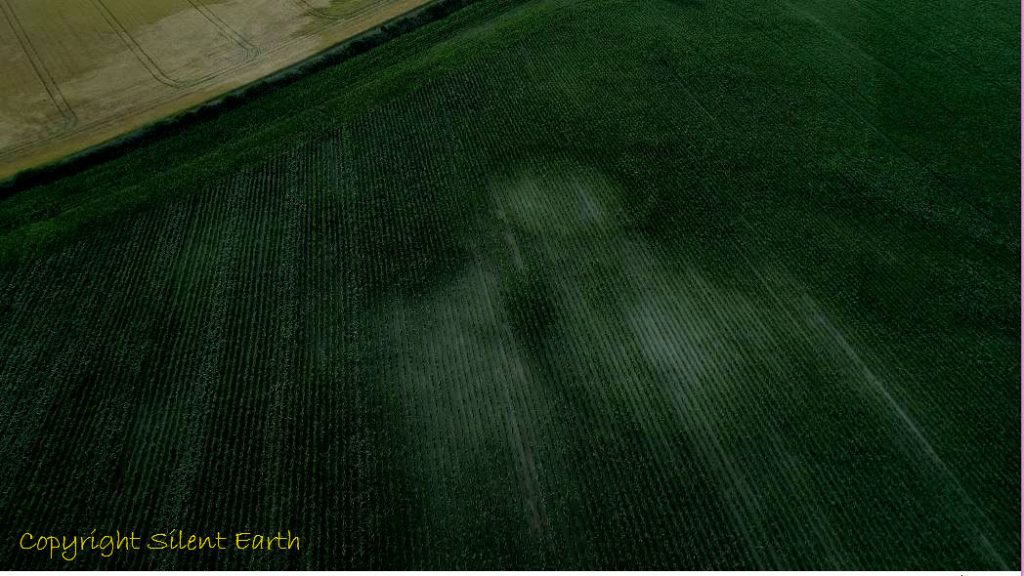 Ring ditches A and B

Below: The old road to the central left is visible here. This passes Thomas Hardy’s nearby house at Max Gate, and perhaps, in far earlier times, represented a trackway from here at the southwestern foot of Mount Pleasant Hill to Flagstones Henge, which in Neolithic times partially stood on the grounds of Max Gate. If you look closely at the photograph, running parallel to the right-hand side of the old road, is another linear feature running much of its length. I would hazard a guess that the almost circular feature to the lower central left is one of the natural amorphous markings resulting from the geology of the hill, and was certainly not referred to by Martyn Barber as a principal feature in his 2014 report. 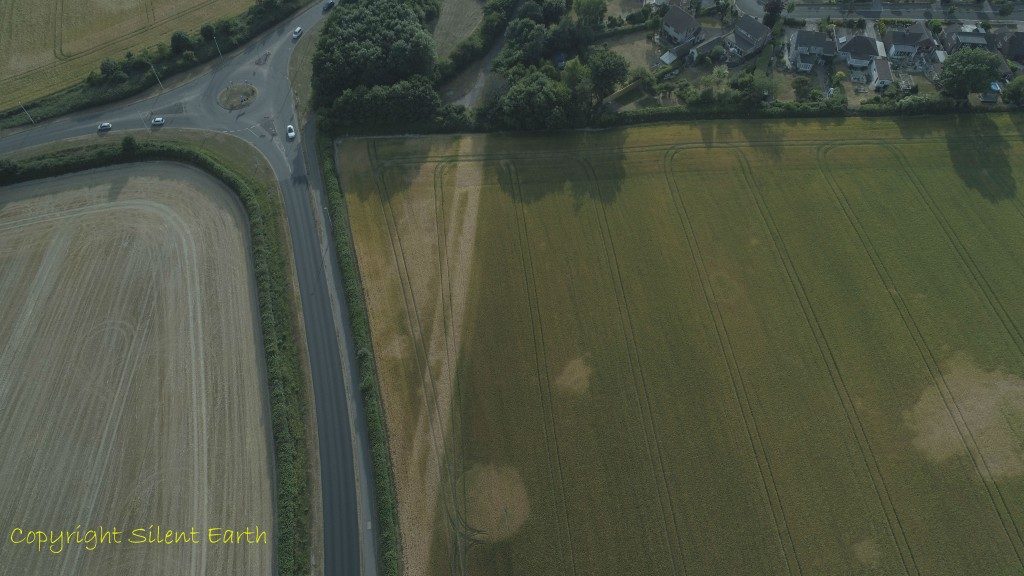 Below: A somewhat rectangular feature on the lower northern slope of the hill facing the River Frome to the north. The henge and palisade enclosure can be seen to the upper right here. Perhaps a mortuary enclosure/house, Medieval or later farm building, maybe a platform for a sky burial, but it seems too low on the hill for a watchtower … Who knows? Pete Glastonbury observed a few years ago that this feature is a similar size to the square feature found inside Avebury’s southern inner circle. 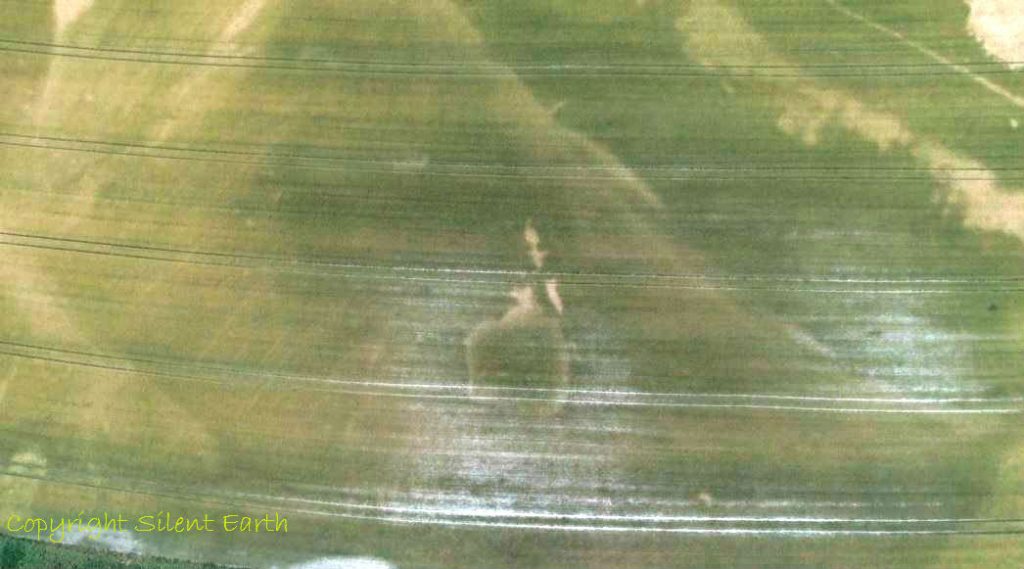 Below: The rectangular feature to the lower left here, photographed from the west. 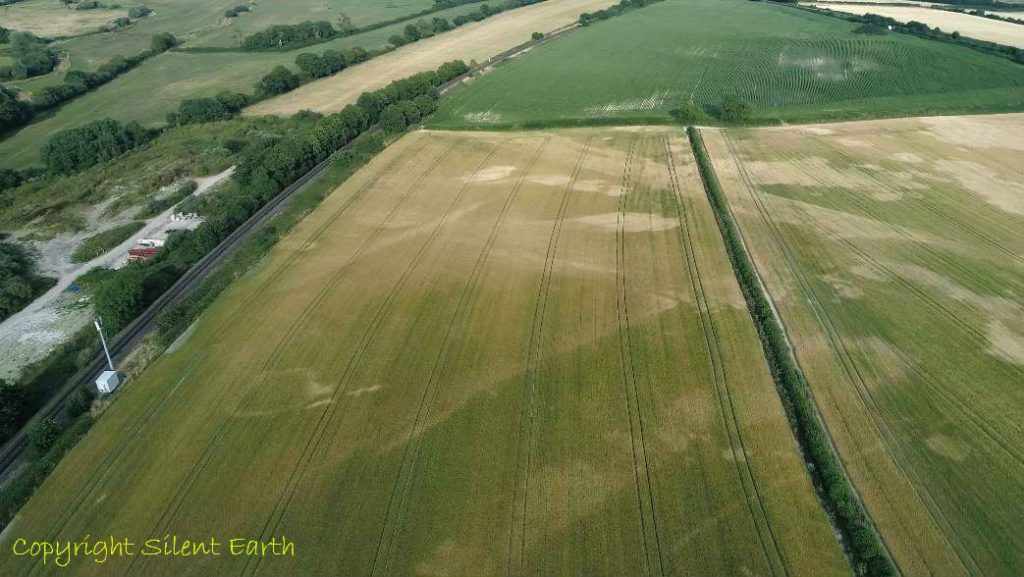 The rectangular feature photographed from the west. 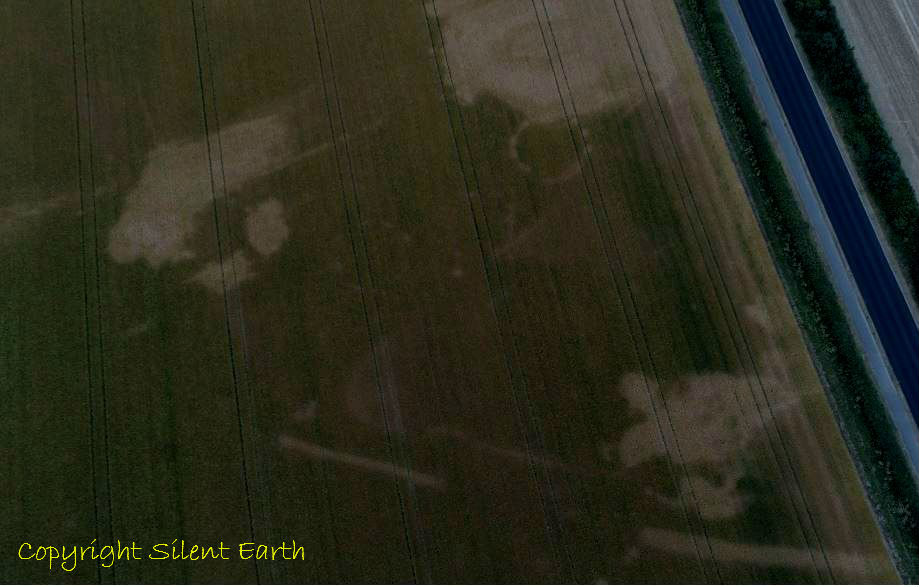 Natural amorphous markings and other features.

Below: A photograph in greater detail taken from the east of the circle of discontinuity to the upper right of the above photograph. I have enhanced this photograph, as it was taken with low light levels just after sunset. Andy Burns suggested these look like possible post holes with an entrance to the northwest. Interestingly, there is a triangular crop/parchmark clearly visible to the west of the circle. 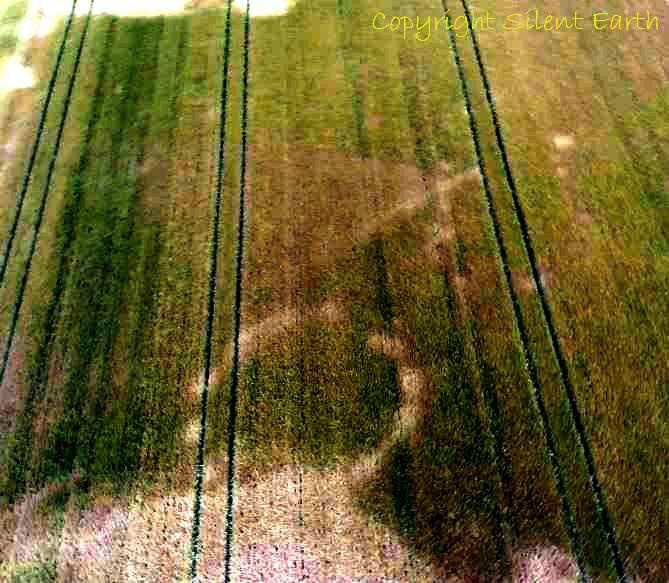 A circle of discontinuity with a triangular feature to its west.

Below: Site IV inside the henge and palisade enclosure. Within this circular feature was housed a circular five-ringed oaken timber structure and sarsen stone cove, amongst other features. Each year this field is ploughed and harvested; evidence of our yesterdays are scratched away just a little more. 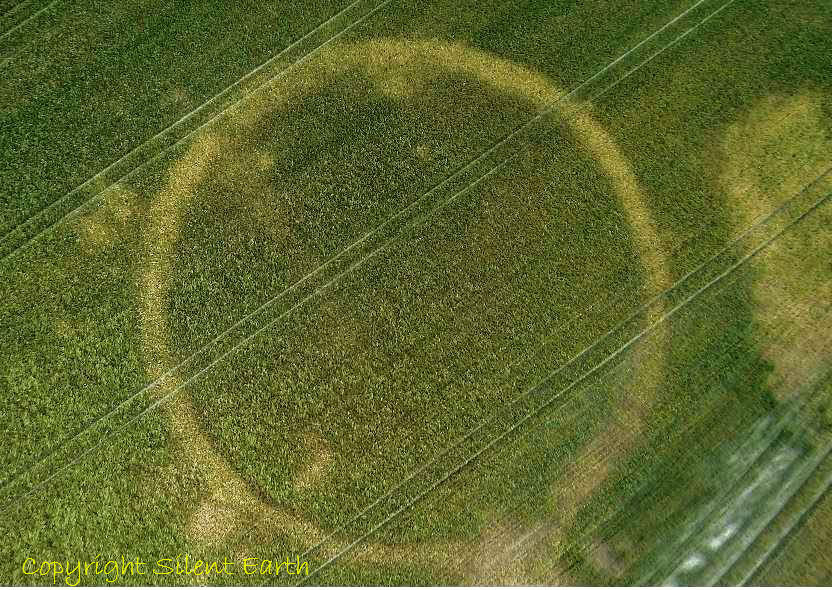 A few random facts from the excavations carried out by Dr. G.J. Wainwright during 1970 and 1971, summarised in the 1979 publication by The Society of Antiquaries of London ‘Mount Pleasant, Dorset: Excavations 1970-71.’ are as follows:

‘That man’s silence is wonderful to listen to.’