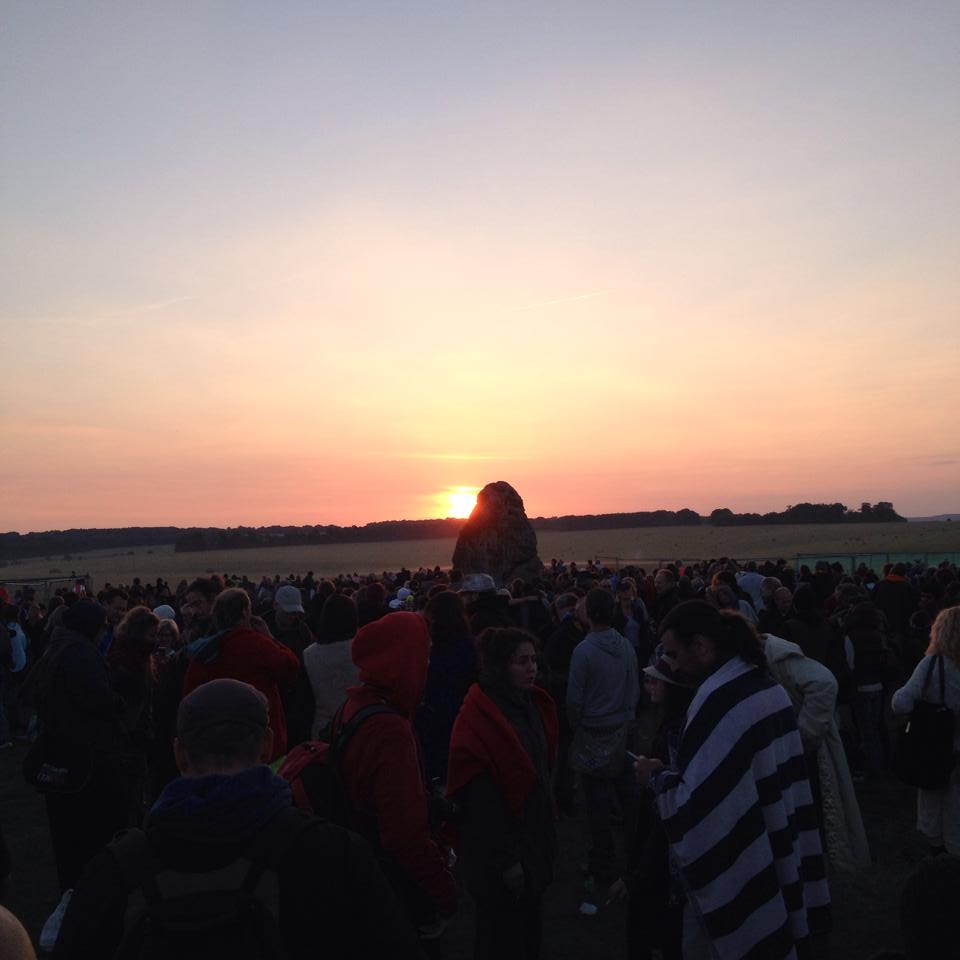 WRITTEN BY Austin Kinsley ON 27/10/14. Summer Solstice Sunrise at Stonehenge POSTED IN Stonehenge

The above photograph was taken at Stonehenge by Mr. Paul Barlow on Midsummer’s Day, 21 June 2014. Given the vagaries of British summer weather and frequent early morning mists and fogs arising in this region of Salisbury Plain from the confluence of five rivers near Salisbury to the south, a perfect sunrise is the exception rather than the rule. For a photograph to also capture a perfect sunrise relative to the Heel Stone at Stonehenge, rarer still. These factors combine to elevate this image into something special.

This is the first perfect summer solstice sunrise after the removal of the road  immediately to the north of the Heel Stone. As the people were gathering in anticipation before the sun first rose it struck me when looking at the image that they had naturally congregated in a circular manner around the Heel Stone, which itself took on the character of a spoke at the centre of a wheel, hinting of a circular motion. The Heel Stone is clearly the central focus in the foreground. The people in the foreground, with only a few exceptions again, are almost invisible, gathered in an orderly, circular manner around the stone, so much so that they appear to be an extension of the stone itself, secondary to the homage Earth is paying to the sun. This is the day that the sun “stands still” at its most northerly position in the eastern sky. On each day following, it rises further south in the eastern sky until the winter solstice, a reversal of this timeless celestial ballet. This process is identical for us today as it was in the time of our prehistoric ancestors.

The people in this photograph, and all witnessing this perfect sunrise on the Heel Stone at Stonehenge on 21 June 2014,  join a unique group of human beings linked over at least 4500 years, each of whom can say ‘I was there on that day’. This shared experience is carried through all of eternity with each person’s own unique version of the precious moment, whether it was this year or 3000 years ago. Only at those solstices when the clouds, fog and mists lift to reveal the true majesty of the event does its full significance become most potent in human terms.

In this image with the people gathered in a circular hub around the central stone marking the rising of the solstice sun, it is easy to imagine that the Heel Stone is the most significant stone of the monument, certainly in the summer solstice, as the whole scene looks so natural and  organic. Previously, with the fence immediately north of the Heel Stone and the road beyond, this artificial restriction stopped people gathering north of the Heel Stone and naturally forming a circle around the stone itself.  It also makes  me wonder if, as with the sacred site at Mecca, ‘pilgrims’ to Stonehenge would have circulated around the central point of the Heel Stone. As our ancestors’ minds were naturally attuned to the cycles of the pristine planet they were blessed with, they would no doubt have rotated in a ‘sunwise direction’ around the Heel Stone rather than the ‘widdershins’ direction by which today’s tourists are shepherded into circulating the monument.

Many words have been written of Stonehenge being an astronomical observatory or computer. The general consensus is that at some point it was a monument for memorialising certain key celestial occasions, primarily the midsummer solstice sunrise and the midwinter solstice sunset. After his Stonehenge environs project in 1990, Mr. Julian Richards, the respected archaeologist, stated that Stonehenge was a temple of the sun, concurring with the ideas of William Stukeley, the antiquarian from the early 18th century. The idea of a prehistoric Sun King presiding over the children of the sun at the sun temple perfectly fulfills the Blakean lament of a lost golden age of Albion.

The line of the solstice axis runs via the Avenue and the Heel Stone through the centre of the monument, the middle of the three arches of the outer ring, and the centre of the Great Trilithon. Tim Daw recently proposed that there may also be a winter solstice sunrise alignment and a quote from his “Stonehenge and the Winter Solstice” leaflet states, ‘The outside faces of the two uprights of the Great Trilithon were finely worked to be flat surfaces. These surfaces and the lintel that was on top of them were aligned to a bearing of 129 degrees, which is the direction of the winter solstice sunrise…The positioning of the largest and most prominent trilithon was not by chance, and that it makes both the sunrises and sunsets of the solstices is, I believe, more than probable and has not been recorded before.’  Our ancestors achieved an almost superhuman feat in planning and constructing Stonehenge. With an intellect equivalent to our own today, personally I do not doubt that this is the case. A perfect and complete balance, it brings to mind the overworked phrase of recent times states: ‘As above, so below’.

The key features of the Heel Stone, the spindle at the centre of the above human circle, are as follows

The stone was first mentioned by John Aubrey and completely ignored by Inigo Jones.

I recently enjoyed an exceptional Sunday afternoon at Stonehenge with Mrs. Bradbury, an 84 year old lady, and her family. Mrs. Bradbury’s father was a shepherd, tending his sheep  in and around Stonehenge. She spent many hours of her childhood accompanying him at work, climbing around the stones, a practice that her father disapproved of for reasons which I have elaborated on in greater detail in my previous post here ‘Touching Stonehenge’. As Mrs Bradbury was reminiscing during our walk near the Heel Stone that afternoon, she told me that her father had mentioned that the priests from the church (Stonehenge) were buried in the region of the Heel Stone. 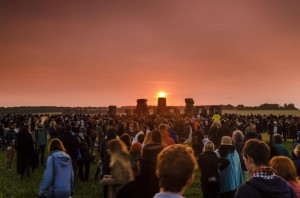 The above image by Mark Twiglet Head (copyright Mr. M.T. Head) was taken shortly after Paul Barlow’s image of the sun and Heel Stone, from southwest of the monument looking northeast, and was taken later, with the sun higher in the early morning sky. Here, the sun is captured rising above the Great Trilithon. Again, the crowd is naturally gathered in a circular manner around the monument itself, as there is limited space inside, where my experience has previously been one of all present who wish to occupy it being packed into the ‘sancta sanctorum’ in the manner of sardines. These sights and rituals have been acted out at Stonehenge on Salisbury Plain over thousands of years and are timeless. The faces of the people change but the essence of the celebration remains exactly the same.

Carl Sagan immortalised the words, ‘Imagination will often carry us to worlds that never were, but without it we would go nowhere.’

The setting is around 2500BC, after the stones were set up in the centre of the monument at Stonehenge and probably before the earthwork Avenue was constructed around 2200BC:

The circular congregation of people around the central ‘spoke’ of the Heel Stone in the top photograph gives the impression of a sense of motion. For a time preceding the first appearance of the sun, perhaps the gathered crowd would have paced around the ‘sun’ stone in a clockwise or ‘sunwise’ manner. At today’s solstices, the most sought after space is inside the sarsen ‘circle’, the sancta sanctorum. This strongly hints to this area being reserved for the elite of the day to observe the sun rising in a similar fashion to this perfect sunrise over the Heel Stone, and narrated by Sir Patrick Moore in this 1972 edition of The Sky at Night:

A second, smaller stone hole just northwest of the Heel Stone was discovered by the archaeologist Mr. M. Pitts, and I have been reliably informed was not a partner to the existing Heel Stone and did not stand at the same time. A circular bank was dug around the existing Heel Stone, which would have restrained those gathered circling the ‘sun’ stone from touching it. Just before sunrise, instructions would have been given for the ‘wheel of the sun stone’ to stop turning and the area between the Heel Stone and main monument to be promptly and completely cleared of people. This would allow the Heel Stone shadow being cast from the rays of the solstice sunrise to move closer to the stones of the main monument. It was possibly boosted by an additional shadow generated by the Slaughter Stone. To allow the clearest of views for those gathered inside the main monument, the crowd would have congregated northeast and northwest of the Heel Stone to view the final sunrise.

There are similarities in a circular motion around the Heelstone to an element of the Hajj to Mecca established by Muhammad. In the ‘Tawaf‘, pilgrims walk seven times counterclockwise around the ‘Kaaba‘. The circle begins from the black stone on a corner of the Kaaba and by touching the stone if practical. 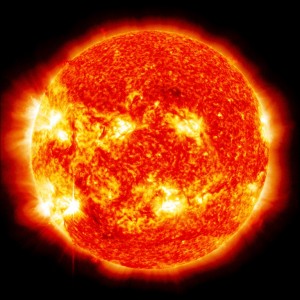 The two images above of the 2014 Solstice sunrise from the top of the page are copyright Paul Barlow and copyright Mark Twiglet Head respectively, who I would like to thank for inspiring my imagination.