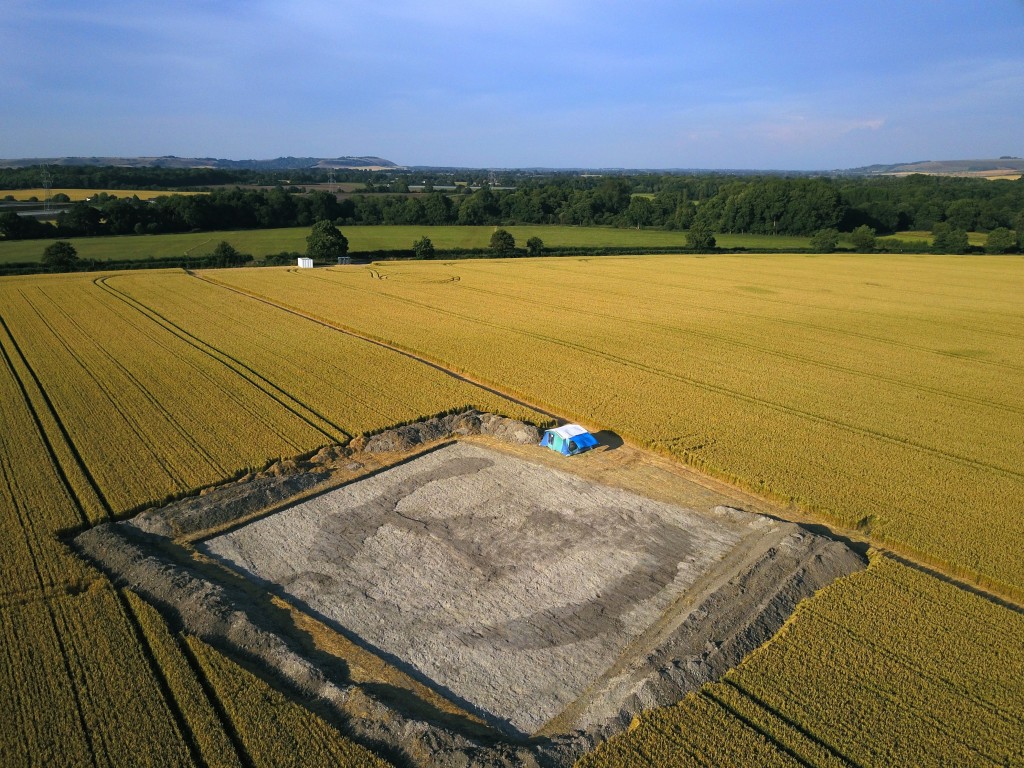 Further to an earlier geophysical survey and aerial footage, the University of Reading have been excavating a field in the Vale of Pewsey known as Cat’s Brain, southeast of Hilcott, a possible Neolithic long barrow. The monument is listed on Historic England’s Pastscape record here, and Tim Daw last week indicated a possible equinoctial alignment of the long barrow on his blog www.Sarsen.org here.

From the Middle English cattes brazen, the name appears to be a reference to rough clay mixed with stones that’s widespread in certain areas, as opposed to feline anatomy.

On Sunday 9 July 2017, I visited the excavations with my friend Pete Glastonbury and his daughter Sammy. Dr. Leary, the project director, kindly invited us to remain, as a short lecture was given providing an update on the excavations to date, confirming that the feature is indeed a long barrow and:

Below: An aerial photograph clearly showing the outer ditches and the trapezoidal feature partly excavated and beginning to be revealed. 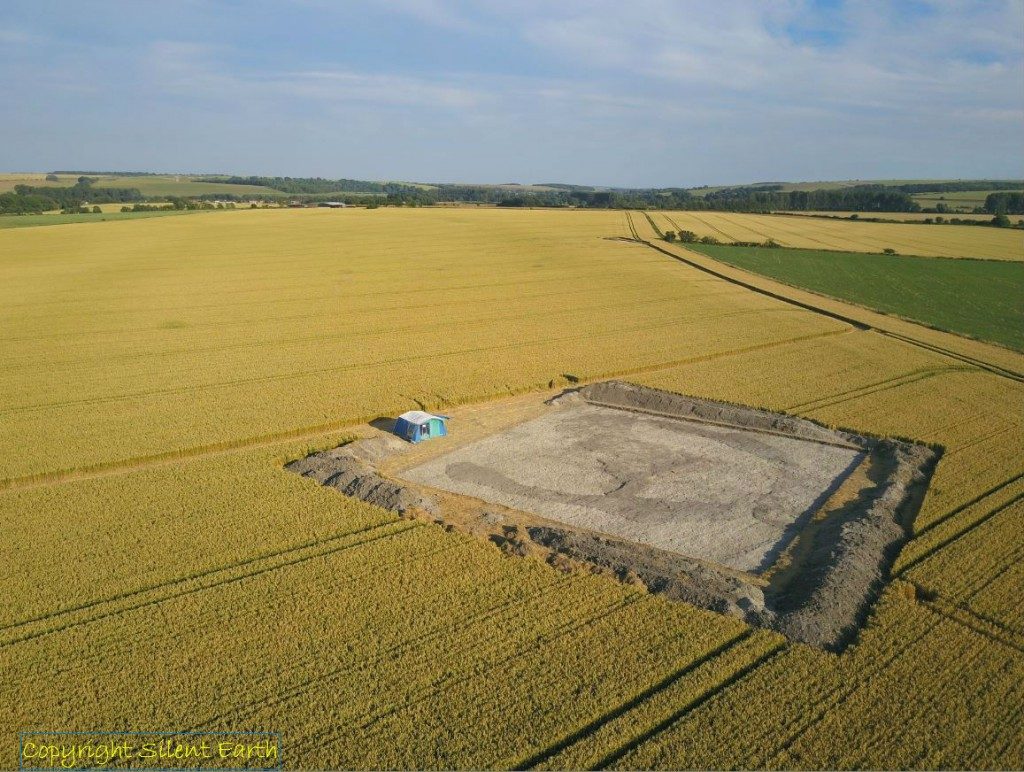 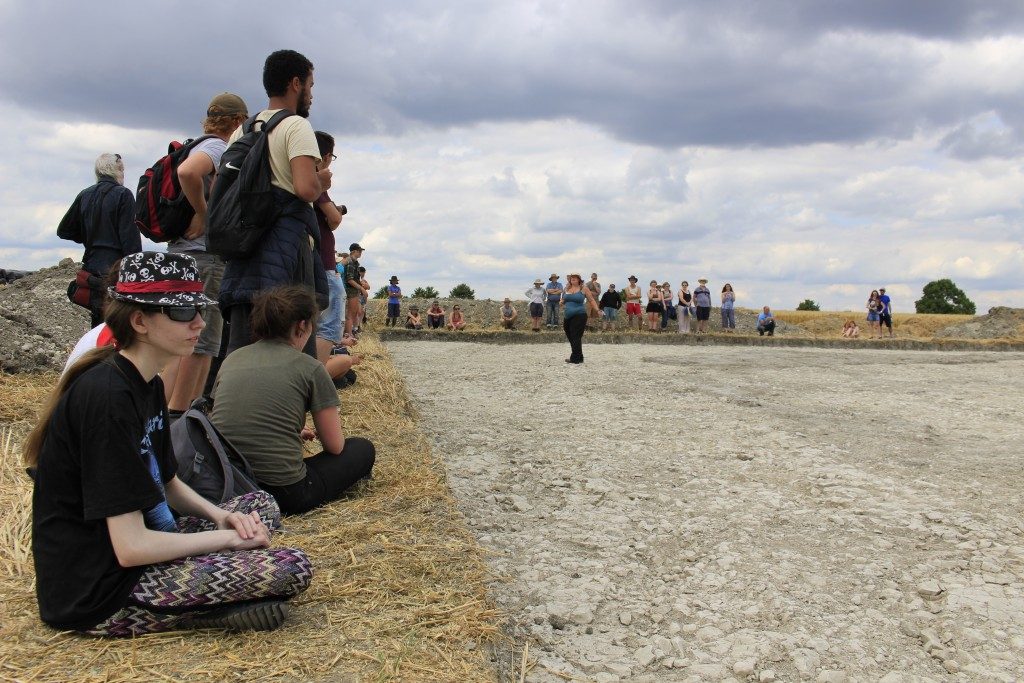 Below: The northern side of the curved ditch of the long barrow. 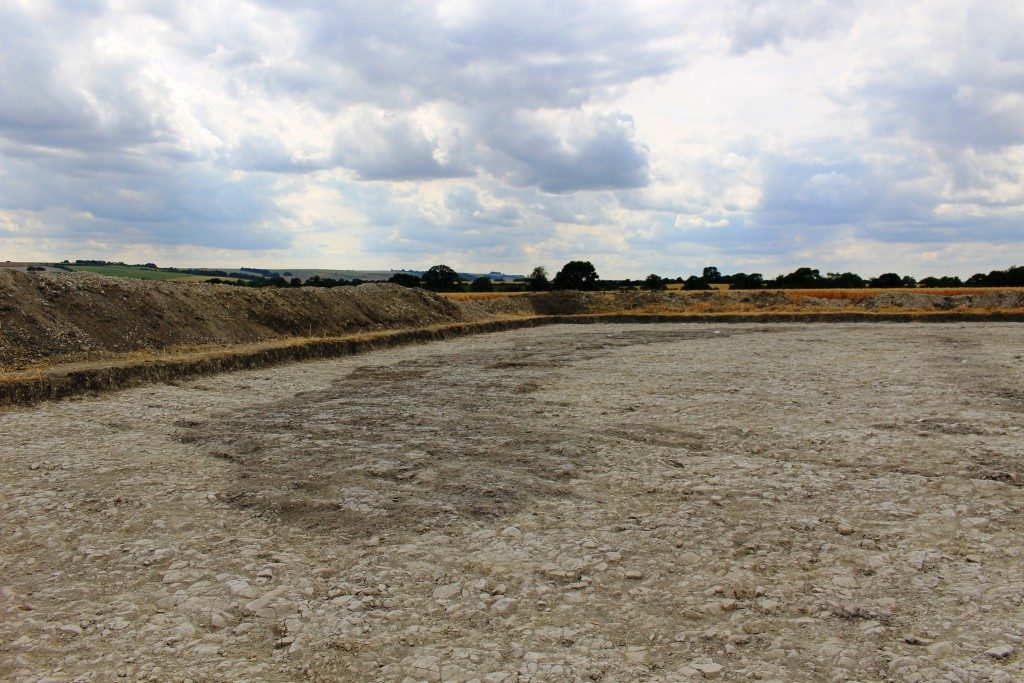 Below: The trapezoidal feature can be seen to the right of the outer ditch in this photograph. 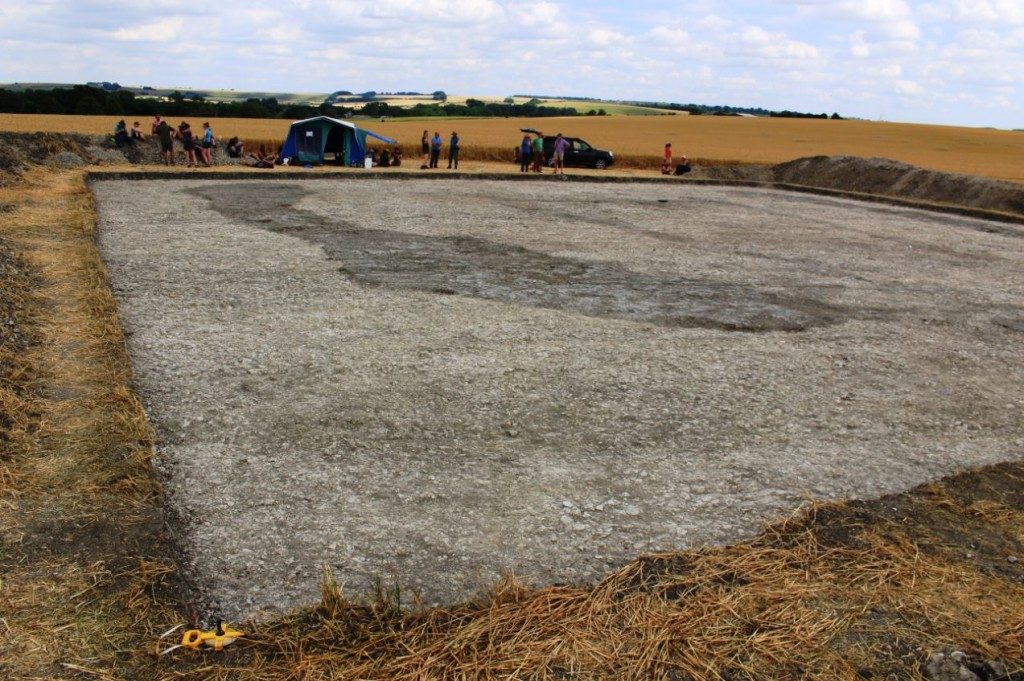 Below: This photograph illustrates how shallow the top soil remains above the chalk to this day and what are likely Medieval plough marks can be seen running broadly north-south across the chalk surface here. 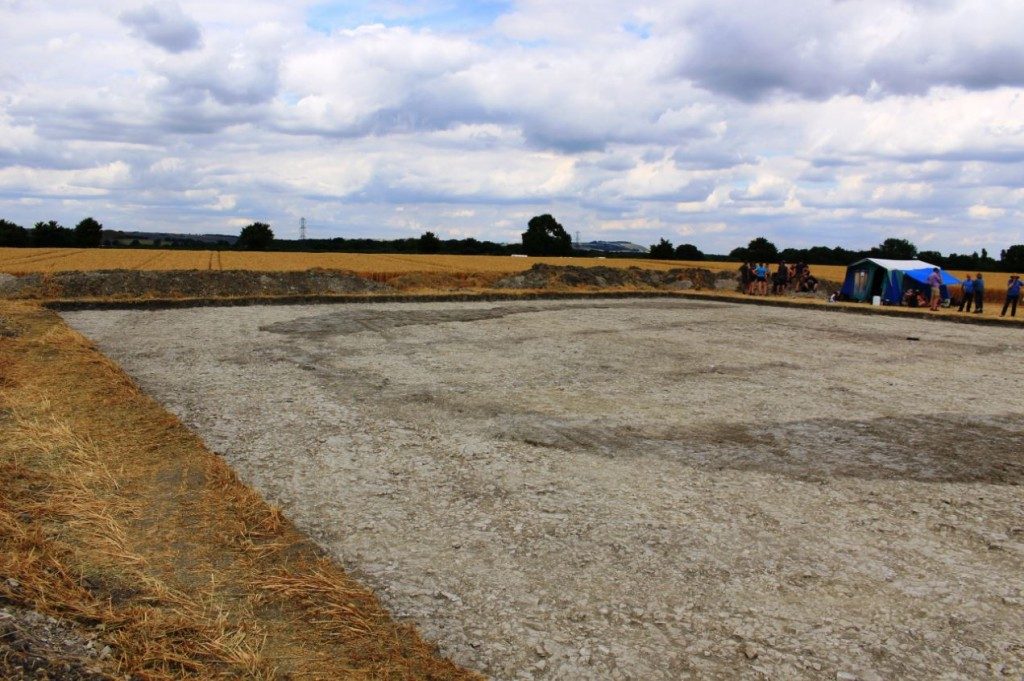 Below: This gentleman is indicating where a pit containing animal bones has been located. 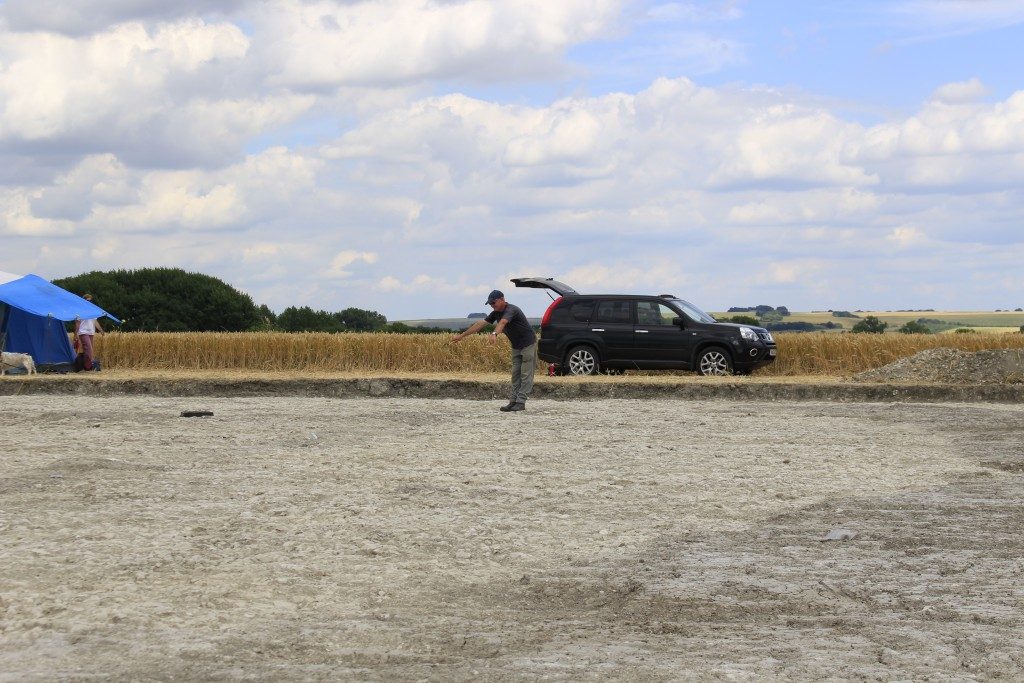 Chatting informally with Dr. Leary, he suggested this long barrow exhibits similarities to Fussell’s Lodge, a Neolithic long barrow noticed from the air in 1924, seven and a half miles southeast of Stonehenge and excavated in 1957. Historic England write of Fussell’s Lodge, ‘This well known long barrow was the subject of an extensive excavation by Ashbee in 1957. A palisaded mortuary house which contained at least three oval pits each with an inhumation and one backfilled with soil containing cremated bone were followed by a rectangular structure. At the eastern end of this were stacked the skulls and bones from 53 to 57 individuals. Also discovered were two Early Neolithic pots and an ox skull all beneath a cairn composed of flint nodules. The cairn also contained flint knapping debris, animal bone, antler and Late Neolithic pottery. The side ditches were found to contain fragments of Bronze Age collared and globular urns and Roman coarse ware and Samian pottery in the upper fills.’ The dating of Fussell’s Lodge long barrow and its mortuary structure to the earlier Neolithic period is explored here. 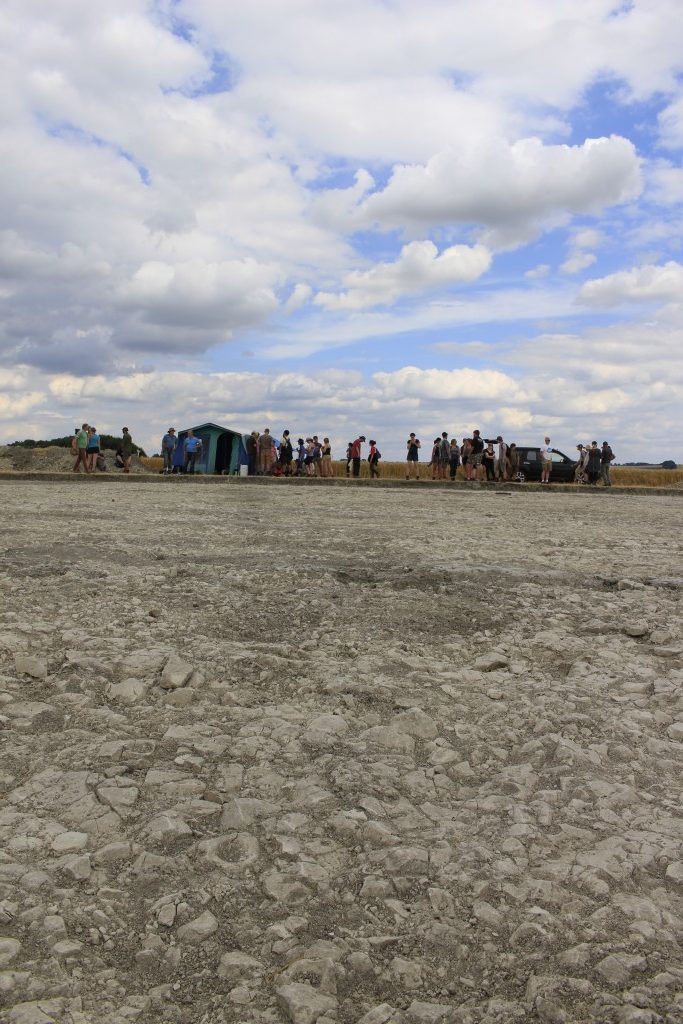 It will be interesting to see what the next two weeks’ excavations may reveal. 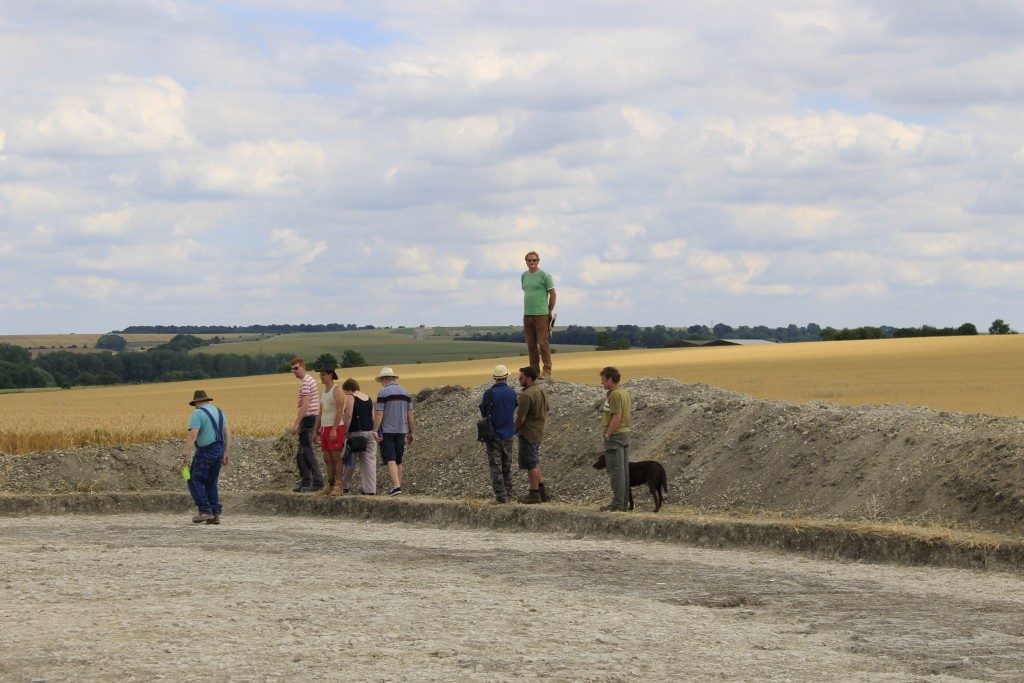 Such discoveries as the above make one wonder what else may be waiting to be revealed beneath the fields of the Vale of Pewsey in Wiltshire, north of Stonehenge and south of Avebury.

Our aerial footage of surrounding fields this week leads Pete Glastonbury to speculate:

Below: ‘Looks like two tracks leading to a large henge in the green field.’ 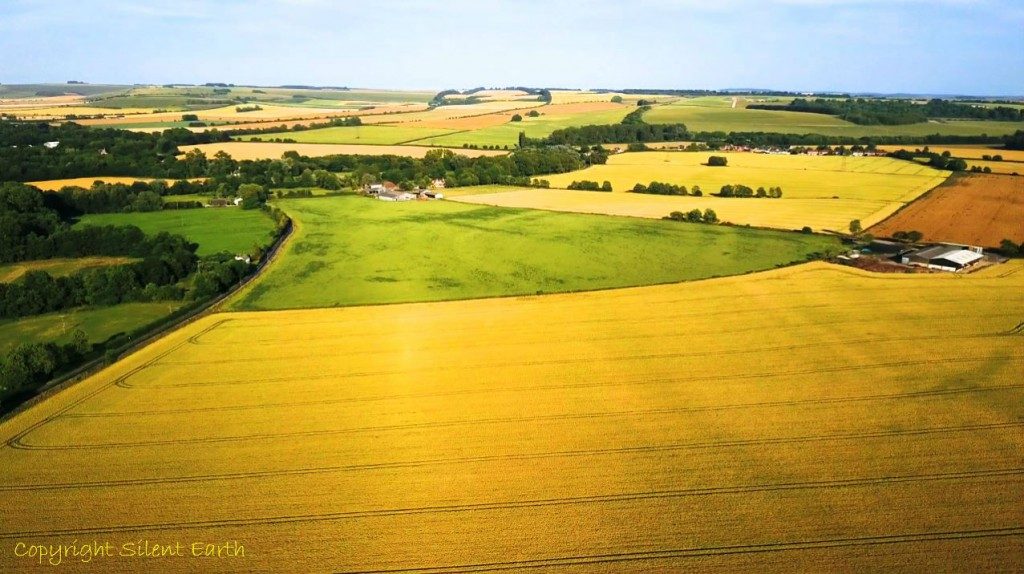 Below: ‘There is a faint rectangle here.’ (central right) 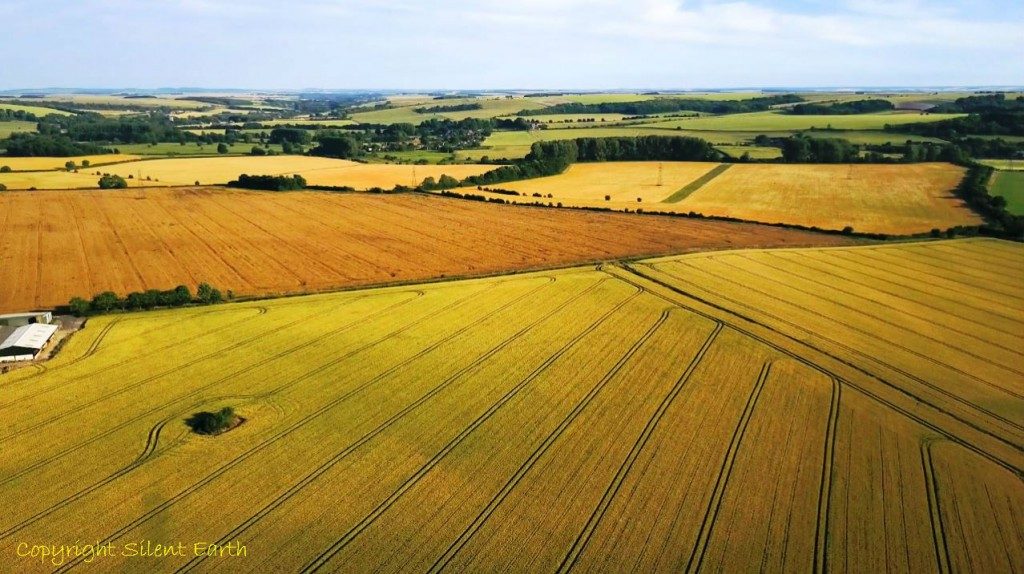 As Carl Sagan once said, ‘Imagination will often carry us to worlds that never were, but without it we go nowhere.’