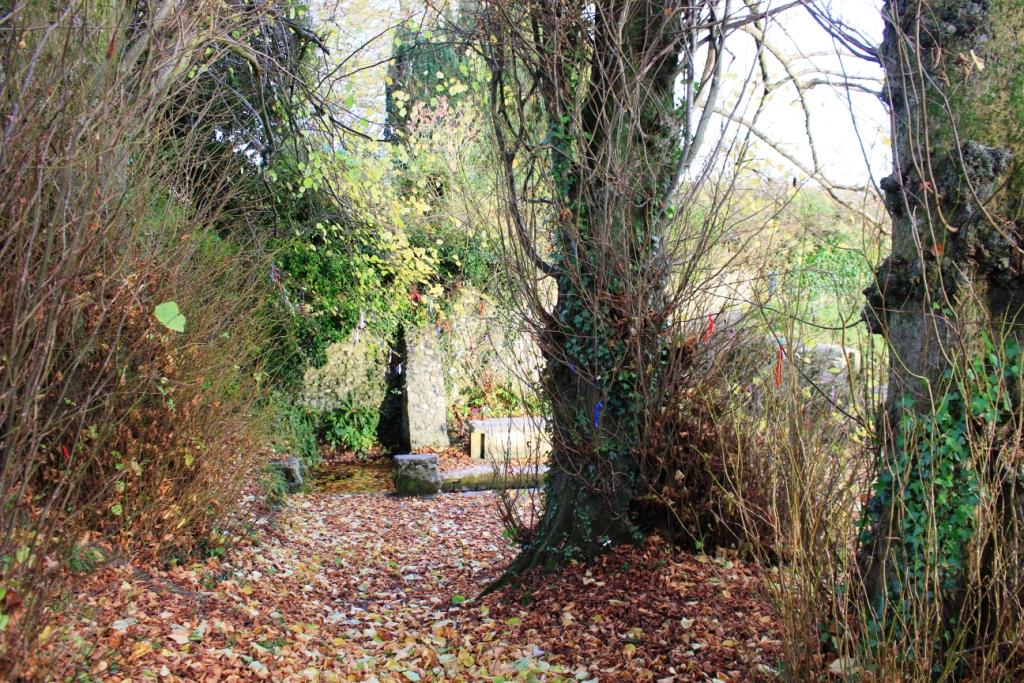 On 20 November 2016, after visiting a secondhand books fair at Dorchester County  Museum, as it had turned out a gloriously sunny afternoon and on the spur of the moment, Patricia and I decided to complete our day out with an autumnal visit to St. Augustine’s Well or The Silver Well at Cerne Abbas in Dorset. On a wall (and unfortunately without credit to the author) close to the location of the well is a highly informative description of the Legends, truth and superstitions of this most ancient and sacred well, which are reproduced with thanks below:

Legend says that St. Augustine once visited Dorset. While there, he met some shepherds grazing their flocks and asked them whether they would prefer beer or water to drink. The temperate shepherds replied, ‘Water’, whereupon St. Augustine struck the ground with his staff, crying ‘Cerno El’ as the water gushed out. The words were, supposedly, a pun on Cernel, the old name of the village, and meant ‘I perceive God’. 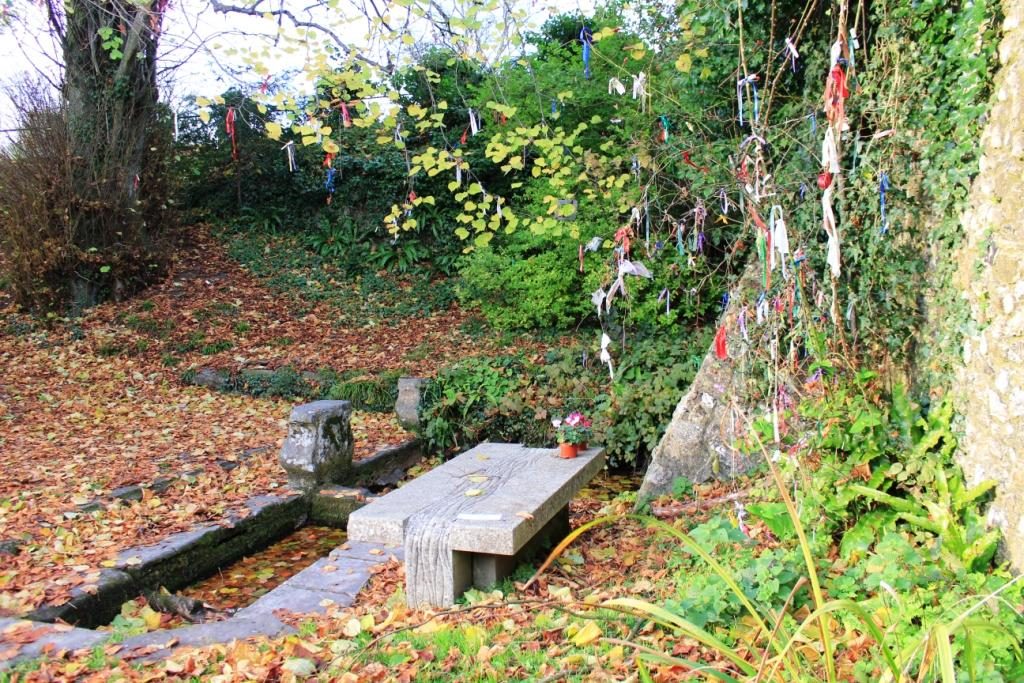 It is thought that the above legend was invented by the Benedictine monks of Cerne Abbey to serve as an attraction for pilgrims. Closer to the truth, probably, is the story of St. Edwold, a member of the Mercian royal family, who one day had a vision of a silver well. He went wandering through the countryside and, when he came to Cerne, he gave some silver pennies to a shepherd in return for bread and water. The shepherd then showed him a well where he could drink, and St. Edwold recognised it as the well of his vision. He built a small hermitage by the spring and lived there until his death in 871. In 1620 Thomas Gerard wrote in his Survey of Dorsetshire that the well was ‘heretofore covered with a chapel to St. Augustine’. But the chapel was probably swept away along with a huge quarry of cut stone and rubble, as Cerne Abbey was demolished following its dissolution during the reign of Henry VIII. 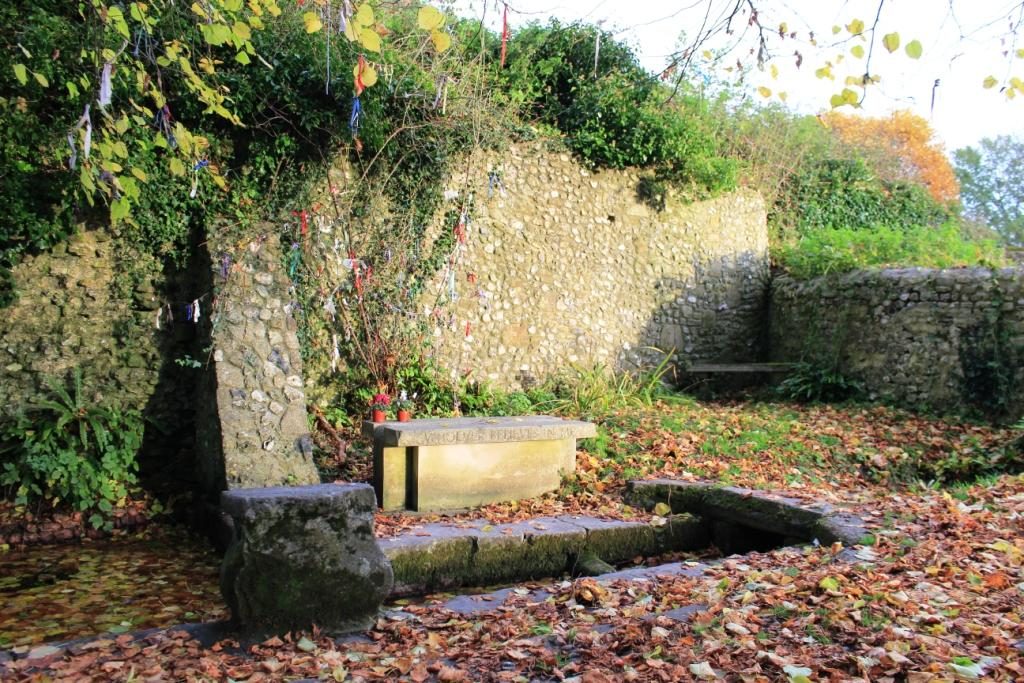 As with all holy places, there are many superstitions attached to the well. 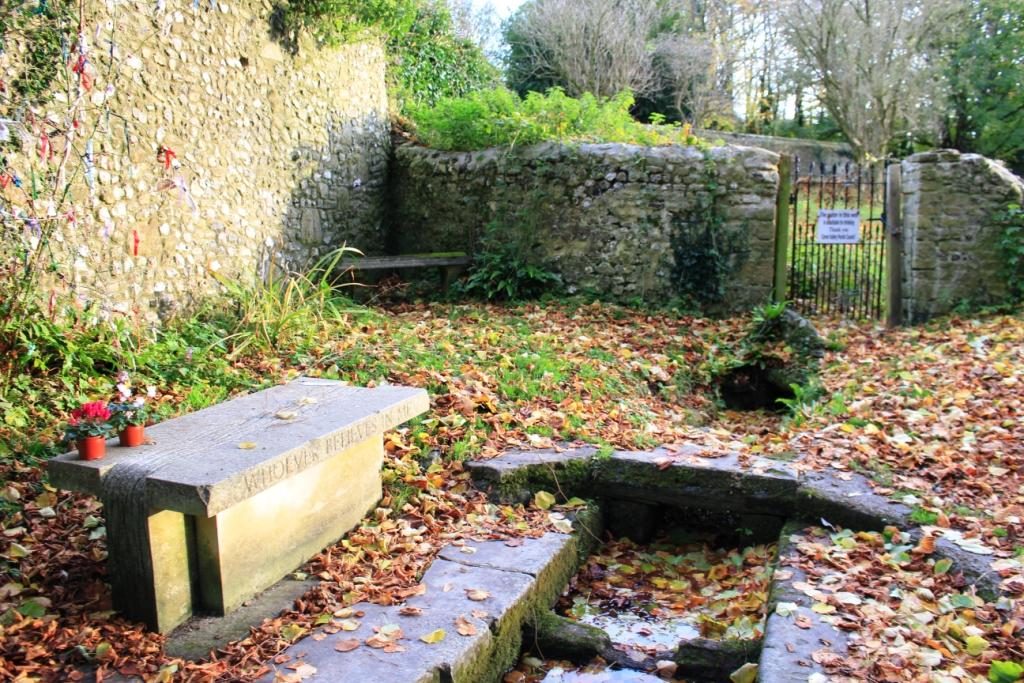 Until the last war, the waters were regularly used by the villagers living in Abbey Street for their drinking water. Now it is still good to dink in the springtime when it is flowing freely, but by the late summer and autumn the flow is much less vigorous and the water can become stagnant. Not long ago, a three foot eel was found in the central rectangle, living under a pile of damp leaves! Whatever its history, the well is a holy place full of peace and quiet. Respect it, and take some of its peace with you into the busy world.

On October 22 1763, from Wareham in Dorset, John Hutchins wrote to William Stukeley observing, ‘whether St. Augustin was here, may be doubted, but there is a wall in the churchyard of Cern, that still bears his name. The monastic historians tell us that the people drove St Augustin and his followers out of town and fastened tails of cows or fishes to their garments, and that all those who were concerned in this affair were punished with an elongation of the os sterni. I mention this legend only to inform you that the inhabitants of this place still retain and give credit to it, and I imagine that their posterity, and this distinguishing mark, still exist.’

Mention of St Catherine echo’s across many sites in Dorset and Wessex, such as here. Of the pre-Christian Catherine and her eight-spoked Catherine wheel, such as the one carved on a stone here, we know little. The eight spokes may have represented the eight agricultural festival dates of solstices, equinoxes and the cross-quarters days, that our prehistoric ancestors observed and celebrated with bonfires at these key points in the passing of the seasons. 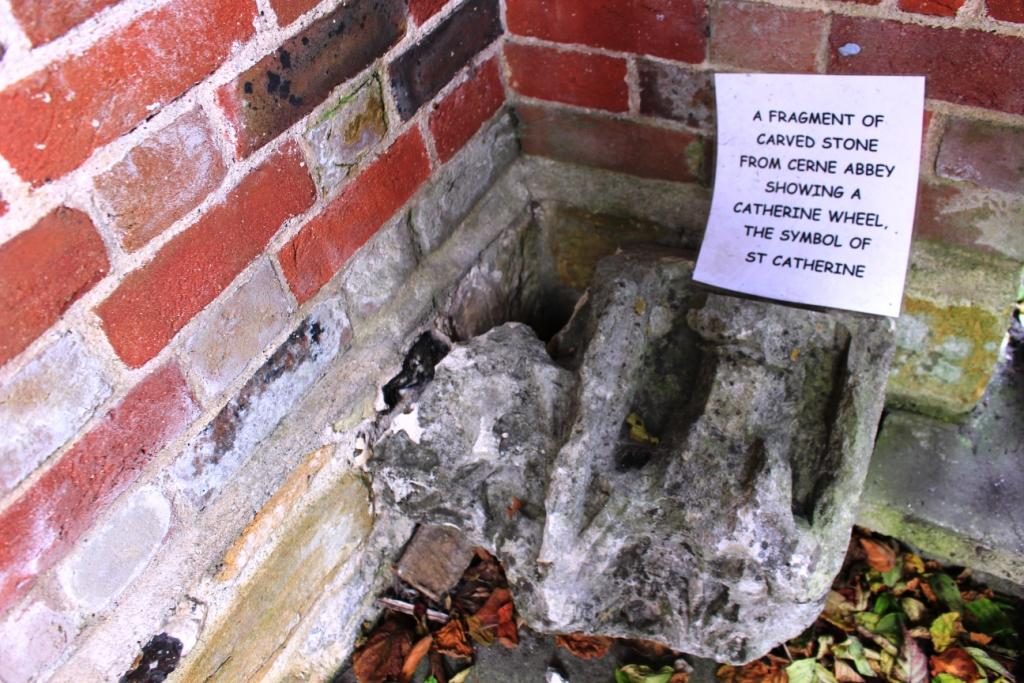 There is however more information available to us today on the St. Catherine of later Christian legends. There is no historical evidence, but the legend has it that St. Catherine was the talented daughter of a noble Alexandrian family. She converted to Christianity as a child after a vision of the virgin and Christ child. The rest of her short life was spent in study of the scriptures. She was executed at 18 years old. It was her courage leading up to her death that ensured her sainthood. She denounced the Emporer Maxentius for his cruelty and paganism and tried to convert him to Christianity. He resorted to summoning fifty philosophers to challenge her arguments, but even they had to admit defeat. Finally, he tried to seduce her, but she reacted with scorn. Losing his temper, he threw her into prison.

While in prison, she converted not only 200 of the prison guards, but also one of the visitors, the empress Faustina. This further enraged the Emperor, who condemned Catherine to be broken on a spiked wheel. Moments before this was to occur, the wheel shattered sending spikes flying into the crowd of spectators. She was finally beheaded, still proclaiming her faith, and her body was carried by angels to the summit of Mount Sinai, where a monastery to her name stands to this day. Her cult reached the west with the returning crusaders, where many hilltop chapels were dedicated in memory of her mountain shrine. Her feast day is 25 November and, until recent times, was observed by crafts associated with wheels. She was also the patron of young unmarried girls.

Below: A few hundred yards from St. Augustine’s well are the ruins of Cerne Abbey, founded in 987AD, which the current owner kindly opens to the public to enjoy. This is one of the few remaining buildings, the Abbot’s porch, a three storey entrance to the Abbot’s Hall. I shall return to this subject on another occasion. 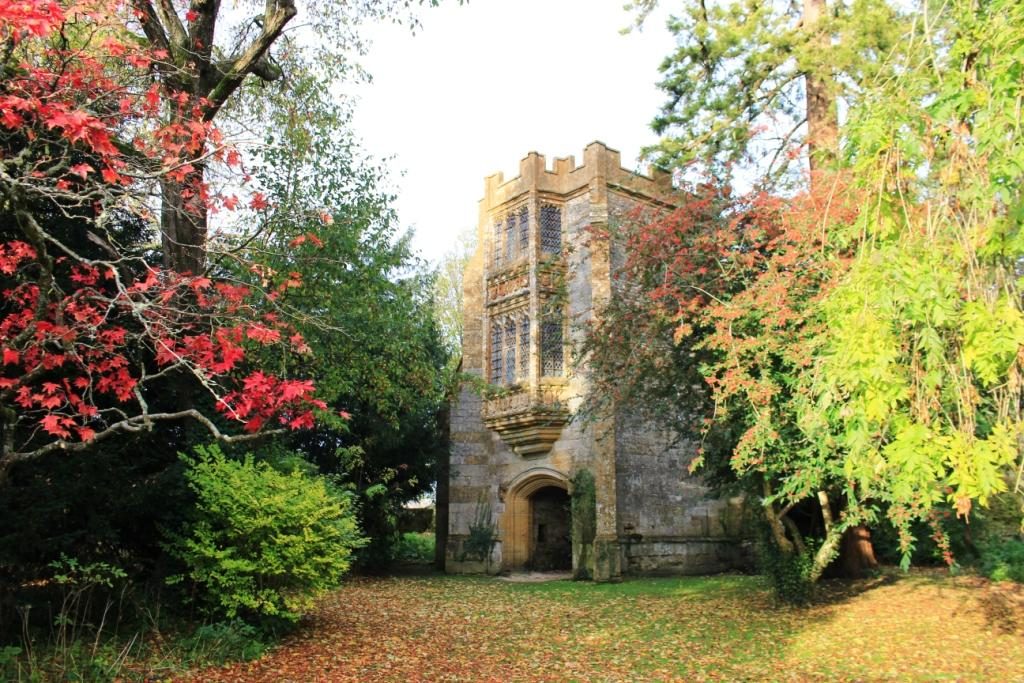 Below the Cerne Abbas giant. More on this enigmatic chalk hill figure here. 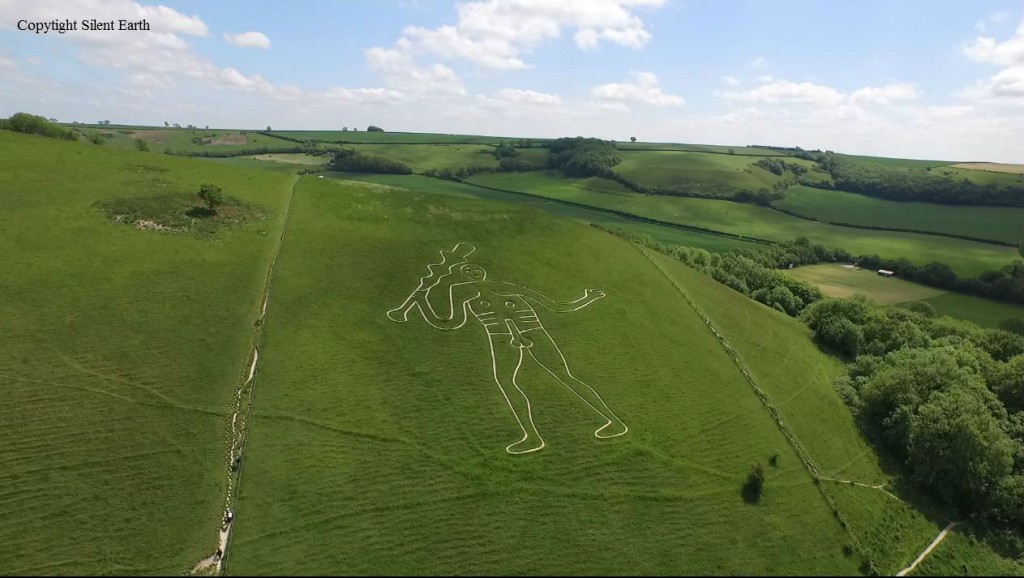