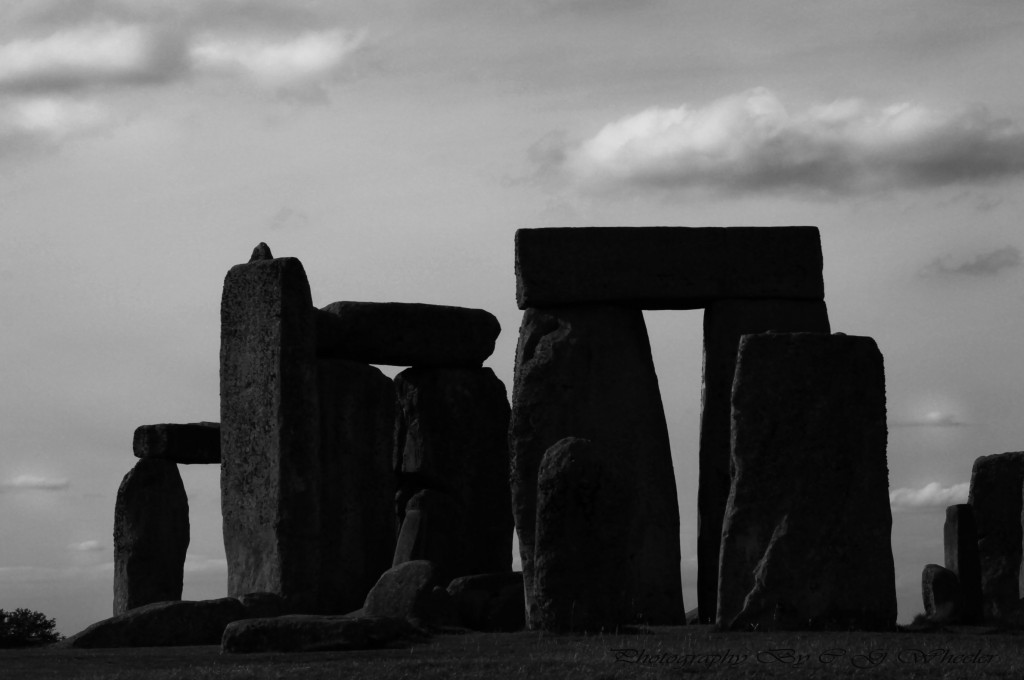 On reviewing an archive earlier this year , I  discovered this article and  transcript of  the auction in Salisbury 0n 21 September 1915 at which Stonehenge was sold and have replicated the document as faithfully as possible below .

Amesbury Abbey estate, the historic domain which was fully described in our issue of a fortnight ago, was brought under the hammer at the New Street Theatre, Salisbury, on Tuesday afternoon. No purchaser was found to undertake the responsibility of the estate as a whole, extending to about 6,420 acres. With an estimated rent roll of £5,359, it was broken up into lots, the greater number of which were sold, the purchase money of the lots disposed of, aggregating over £64,000. Amesbury Abbey itself, the beautifully situated mansion, rich in historical and literary associations, remains in hand for private negotiation. From a public point of view, the greatest interest was the inclusion of Stonehenge in the sale. Its private ownership was definitely established in a well-known lawsuit of about ten years ago, when the legality of the action of the late Sir Edmond Antrobus in erecting a fence around the monument for its better preservation was contested, and the high court of justice decided in favor of the owner. From time to time, and particularly since it was known that the estate was coming on the market, there has been a great deal of discussion as to the future of Stonehenge, which, as Messrs. Knight, Frank and Rutley, the auctioneers, explained in a letter to the Salisbury and Winchester Journal during the summer, is under the protection of the Ancient Monuments Act; and suggestions were made that it should be secured for the nation, either by the government or the National Society. The price asked by the owner ten years ago, it was stated, was £50,000. That price was not reached at the public sale, when Stonehenge passed into the hands of another private owner, Mr. C.H.E. Chubb of Bemerton Lodge, Salisbury, who is to be congratulated on his acquisition of the famous monument at the figure of  £6,600. The purchase was quite unpremeditated. When he entered the salesroom, Mr. Chubb had no intention whatsoever of purchasing Stonehenge. Mrs. Chubb is associated with him as joint owner of the ancient memorial.

Reasons for the Sale

The theatre was filled with an interested audience, intending purchasers, and spectators, when Sir Howard Frank, with whom Messrs. Eden, Barnes and Kennaway were associated in the sale, mounted the rostrum. Mr. R.H. Eden of the latter firm and a representative of Messrs …(illegible )… auctioneer who briefly announced the purpose of the gathering. He thought all those present knew the purpose of the gathering. He thought all those present knew the reasons why the estate was being sold. Sir Edmond Antrobus’s son was unfortunately killed in the war. Sir Edmond himself died shortly afterwards and it’s a consequence of Sir Edmond and his son that the firm were offering the estate by auction. Sir Howard thought it must be a matter of regret to everyone in the neighborhood of Amesbury that an estate that had been in one family for so long had to be sold and possibly cut up, and he could only hope someone present would buy the whole property. The auctioneer alluded shortly to the conditions of sale and pointed out that if any questions were asked they would be answered by the representatives of Messrs. Farrer and Co. The firm was selling in conjunction with Messrs. Eden, Barnes and Kennaway, to whom they were much indebted for the help they had given.

Without loss of time, Sir Howard Frank offered the estate as a whole for sale, including Stonehenge. Would anyone in the room give him a bid for the whole estate? he asked. There was no response. The question was not repeated and the auctioneer promptly proceeded to offer the first of the eighty-nine lots: Amesbury Abbey, grounds and manorial rights. The only reservation announced was in respect of the two sundials, which the owner, Sir Cosmo Antrobus, wished to be preserved. Again there was no bid, and without loss of time, attention was directed to the second lot, Countess Farm, of about 1,509 acres which, starting at £7,000, mounted by bids of  £100 each to £8,000, at which figure it was sold to Mr. Alan C. Young. The same purchaser also acquired Ratfyn Farm of 1,369 acres at  £9,500, the bidding having commenced at  £8,000. In quick time the lots up to number 15 were run through. They were not all sold. The parts of the estate which were submitted early and remain for private negotiation included Earls Court Farm of 236 acres, now forming part of Red House Farm, withdrawn at £8,550; a holding known as South Mill, of rather over 62 acres, withdrawn at  £2,300; Water Meadow with brick and tiled cottage, withdrawn at  £2,300; and the charming, old-fashioned residence known as West Amesbury House, withdrawn at  £2,700. A Salisbury syndicate who were extensive purchasers acquired several early lots, including Red House Farm of 964 acres at  £5,800. After competition commencing at  £4,000, Normanton Farm of 603 acres was bought by Messrs. Rawlance and Squarey on behalf of a client for £7,200, the bids beginning at  £7,000, while West Amesbury Farm was bought by Mr. R.C. Crook for  £4,450, to which figure the bidding mounted from an opening offer of  £3,000.

Interest quickened when the auctioneer announced lot 15. Stonehenge particulars of sale were given briefly in a catalogue after an authoritative description of the monument, reproduced by permission from a publication of the Royal Archaeological Institute: Stonehenge, together with about 30 acres  2 rods  37 perches  of the adjoining downland. The lot was described and it was pointed out that “a charge is made for seeing Stonehenge and the net receipts average  £360 per annum.” Any doubts as to its future safety were set at rest by a reminder that Stonehenge has been scheduled under the Ancient Monuments Consolidation and Amendment Act of 1913. While a note to the particulars set forth the condition that the purchaser of the lot would be required to …(illegible )…to the satisfaction of the vendor’s solicitors and maintain a fence on the western boundary of …(illegible )…so as the fence exists at present. The landlord’s outgoings were set out as follows: Tithe commutation rent charge – Dean and Chapter of Salisbury Cathedral £4 16s 3d value 1915 £3 14s 2d land tax 3s total £3 17s 2d.

Sir Howard Frank mentioned that he had seen in the paper that morning that the firm was criticised because they had described Stonehenge in such a simple way. He thought Stonehenge spoke for itself, and it would be an insult for himself in the position of auctioneer to endeavor to describe Stonehenge when the Royal Archaeological Society had been kind enough to give them their own description. They had described Stonehenge in as simple a way as possible and had simply given business details. For the rest, they were content to leave the details to those who were competent to speak about it.

“Would anyone offer  £5,000 for Stonehenge?” proceeded the auctioneer. There was no immediate response. “Surely someone will offer me  £5,000,” urged Sir Howard Frank. A hand from a gentleman in the stalls was held up and in calm, business-like tones it was announced that …(illegible )… had been received. Others followed quickly, the competition being restricted to two gentlemen who raised the figure by bids of  £100 until  £6,000 was reached. The only sound heard throughout the …(illegible )… there was a lull in the bidding, which encouraged the competitors to further efforts.

“Gentlemen,” he observed quietly, “it is impossible to value Stonehenge. Surely  £6,000 is poor bidding, but if no one bids me any more, I shall set it at this price. Will no one give me any more than  £6,000 for Stonehenge?”

The positive announcement that Stonehenge would be sold at that figure, despite the much greater sum that had been publicly stated in the press, which the late owner had asked not many years ago, created some surprise. Very few people in the theatre knew who was competing for the monument and their curiosity was at its height when bidding re-commenced.

“A hundred pounds is bid here,” remarked the auctioneer, indicating a position in the stalls. “May I say £200.” A brief pause. “Last time, at  £6,200,” came the warning, and another  £100 was added. Three more bids brought the sum offered to £6,600. “Have you all finished?” the question was asked from the rostrum. The hammer remained aloft for an instant; there was no further offer and it descended with a sharp rap. Stonehenge was sold for £6,600, but few persons among the hundreds present knew to whom. Again breaking the silence, the auctioneer invited the purchaser to make known his name; a clerk made his way along the dimly lit stalls, returned with a card in his hand, and Sir Howard Frank announced amid applause that the purchaser was Mr. C.H.E. Chubb of Bemerton, Salisbury.

In the remaining lots were a large number of buildings, with a considerable quantity of building land in Amesbury, which has largely increased in importance in recent years. One of the most important of the lots was Amesbury House, situated in Salisbury Street, at present vacant, with an estimated rental value of  £150 per annum. Offers commenced at  £1,500 and proceeded to  £1,950 when, in the absence of further bids, it was withdrawn. The New Inn High Street let to Messrs. Strong and Co. of Romsey at a rental of  £75 per annum was put in at  £2,000, from which figure it advanced by bids of  £100 to  £3,000. One last bid of  £50 secured the licensed premises for Messrs. Strong and Co. Small cottages sold at from  £20 upwards. For building sites there was active demand. Throughout the lengthy catalogue, the most spirited competition was for a valuable area of building land with a long main road frontage of an area between 5 and 6 acres. It was started at a low figure of  £300 and, almost without a pause, additional bids , first of  £25 each and then of  £10, were offered until the original figure was left far behind. No less than £75 bids were received before the property was finally knocked down to a Salisbury syndicate for  £1,100. The last item of the sale was quit and acknowledgement rents were sold in bulk.

The New Owner of Stonehenge

Mr. C.H.E. Chubb, the new owner of the ancient monument, in conversation with a representative of the Salisbury and Winchester Journal on Tuesday evening, remarked that when he went into the sale room he had no intention whatsoever of buying Stonehenge. “But,” he added, “while I was in the room, I thought a Salisbury man ought to buy it, and that is how it was done.”

Asked if he had formulated any plans with regard to the future of the stones, Mr. Chubb replied that the situation was so new to him that he had had no time to think of any plans. He pointed out that under conditions of the sale, he would not (word omitted) possession yet and certainly would do nothing in the matter for some little time. In the meantime, however, the …(illegible )… be assured that every means of protecting Stonehenge as heretofore will be taken. Mrs. Chubb is associated as joint purchaser of the memorial with Mr. Chubb.

Thank you to the Cornelius Reid family, Aynslie Hanna and Colin Wheeler.

The above photograph is Copyright Colin Wheeler . 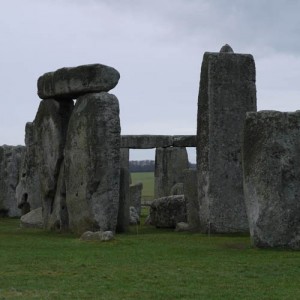