Stonehenge and Broken Hearts of World War One 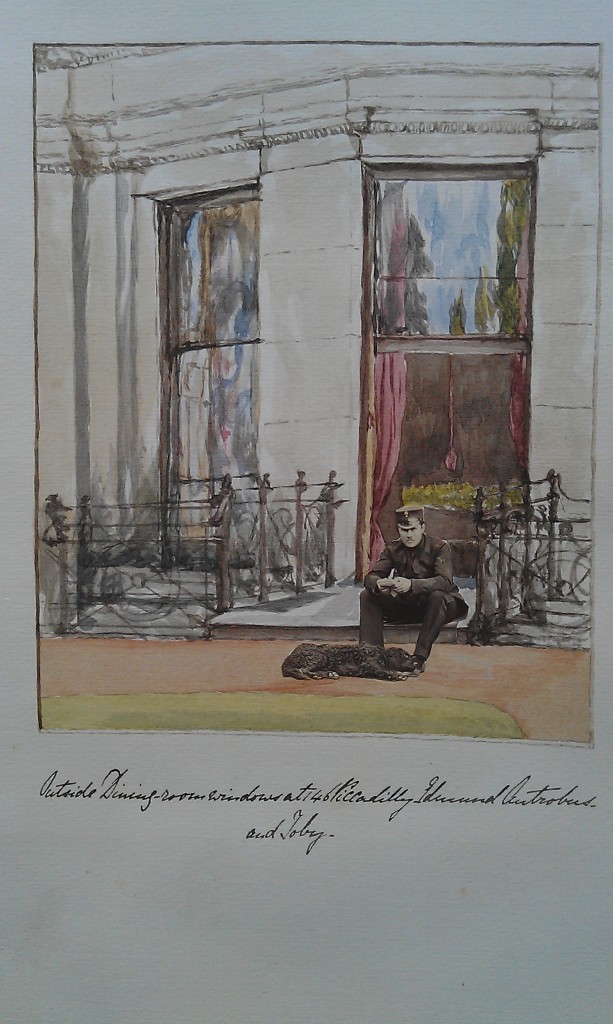 WRITTEN BY Austin Kinsley ON 24/10/14. Stonehenge and Broken Hearts of World War One POSTED IN Stonehenge

The above watercolour with a photograph of the gentleman’s face inserted was painted by Mary Anne Antrobus of her brother Sir Edmund Antrobus c.1869 and was subsequently placed by Lady Florence Caroline Mathilde Antrobus (Nee Satoris), his wife, into her personal scrapbook. Sir Edmund is portrayed on a step outside the diningroom window of 461 Piccadilly with his dog Toby.

On 23 December 1886 at 7A Eaton Square, London, a son and heir was born to ‘the wife of Lieutenant-Colonel Antrobus of the Grenadier Guards, Edmund Antrobus’. He was educated at Park Hill School in Lyndhurst in the New Forest, Eton, and in France before becoming a professional soldier. He played cricket, football and golf.

On 27 May 1908, the War Office published the following (extract): ‘foot guard grenadier guards second lieutenant Edmund Antrobus from 4th battalion, the Prince Albert’s (Somersetshire light infantry) in succession to Lieutenant WE Nicol seconded’. On 21 November 1908, he became a Lieutenant in the fourth company 1st Battalion of this close-knit Brigade of Guards. On 27 July 1914, The Times announced his engagement to be married to Ruth Anstruther-Gray. Seven days after this announcement, Germany invaded Belgium, and Britain declared war on Germany the following day.

The 1st Batallion sailed from Southampton to Zeebrugge on 7 October and fought in the first battle of Ypres. On 24 October 1914, the Germans made a determined effort to break through on the left of the Grenadiers close to Kruiseik. Lieut. Antrobus was killed while gallantly fighting with his platoon during a counterattack on the Germans. A mother and father’s hearts were broken, resulting (some say) in the death of Sir Edmund Antrobus (senior) less than four months later on 11 February 1915.

As a direct result of this personal family tragedy 100 years ago today, 24 October, a chain of events was set in motion resulting in the sale of Stonehenge at a public auction in Salisbury on 21 September 1915. The town of Amesbury are commemorating this event today and the Grenadier Guards will be marching through the town at 230pm in honour of one of their fallen.

A heartfelt thank you, as ever, to the Cornelius Reid family for use of this image.