Stonehenge Stage 1 Pit Clusters and Post Structures 3000BC – 2620BC

WRITTEN BY Austin Kinsley ON 12/04/14. Stonehenge Stage 1 Pit Clusters and Post Structures 3000BC – 2620BC POSTED IN Stonehenge

The main elements currently attributed to stage one of the Stonehenge monument  consist of:

It is the nature of the last element above, the pits, postholes and stakeholes that I would like to briefly consider here. An image is attached above of these mysterious postholes that predate the sarsen circle we recognise today, which were constructed approximately 500 years later.

First, what others have said of these under-the-surface clues to 5000-year-old human activity on the site subsequently utilised for the iconic monument we know today:

The above stage 1 is itself certainly not the beginning of the Stonehenge story and there is also a ‘pre-ditch phase’ recently suggested by M. Pitts and outlined here. An ox bone found near the southern ditch terminal by Col Hawley dates to around 4150BC. Older finds are generally concentrated in the ditch terminals of the southern entrance.

The website of English Heritage here currently states ‘The first monument at Stonehenge was as an early form of henge monument, built about 5,000 years ago, where prehistoric people buried their cremated dead.’

The SRP in 2007 dated the adult burial from the lower fill of Aubrey Hole 32 at between 3030-2880BC ‘supporting the notion that Stonehenge was a cemetery from its inception until the period of the Sarsens 2655-2485BC ‘.

If Stonehenge was a cemetery at the time, then what might the wooden structures below have been used for around 3000BC? 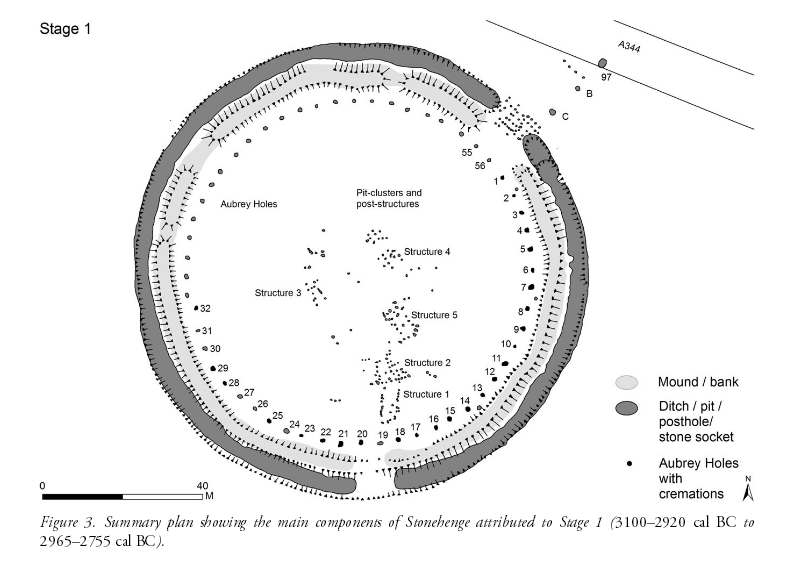 Assuming Structure 1 is a passageway within the southern entrance as one approaches the entrance to the passageway, it is veiled by the five postholes and entrance may have been gained from either the eastern or western side north of the five posts. The more southerly gap on the western side appears as the most obvious  point of entry. Within the passageway itself, there are two additional postholes on the eastern side. I will not hazard a guess as what these relate to, but a structure along the lines of ‘memorial posts’ referred to by Mr M. Pitts above does have its appeal. To the north and at the end of the passageway is the facade of linear posts apparently veiling/blocking the entrance to Structure 2 at that point. Structure 1 may not represent  a passageway at all, but another rectangular wooden structure. The ‘flinty and hard ground from traffic over it’ referred to by Mr W. Hawley above may have been from people entering inside the ditch and bank from the southern entrance and approaching Structure 1 rather than approaching a passageway. As is usual with Stonehenge, its contemplation generates more questions than answers.

Structure 2 is a complex footprint of postholes and may represent two structures, a continuation of the entrance passageway on the western side and a rectangularish wooden structure on the eastern side. The facade of posts at the south of this structure may have been part of a screen simply to provide a windbreak from the prevailing southwesterly wind, which is persistent in this exposed region of Salisbury Plain. Structure 2 strikes me as the most likely gathering point within the ditch and bank complex for people before moving to Structures 3, 4 and 5 to conduct their ‘business of the day’.

Structures 3, 4 and 5 are all broadly rectangular and may have been used as charnel houses to store the bones of the highest status individuals amongst the local family groups who lived in this area of southern England at that time. Each structure may represent a different family/tribal grouping and its location within the site could be determined by the local area they lived in. Structure 4 is in alignment with stone holes 97, B and C, and facing the northeast entrance. This may have been the area of the ‘cemetery’ dedicated to the ancestors of the highest status group within the community. During contemplation of these postholes, I considered the possibility of at least one of these structures representing an excarnation platform, a funerary method known to be used in southern England at this time. Excarnation, though, is likely to have been carried out on raised platforms in particular areas on the banks of the Avon River and not at the Stonehenge site itself .

The Stonehenge ditch and bank structure sits within an area of land (the Stonehenge environs) whose use by man evolved over thousands of years leading up to 3000BC, and was dedicated to the veneration of their ancestors at that time by the local community who lived on the chalklands of Salisbury Plain 5000 years ago. The use of the site to exalt the memory of ancestors and traditions represented by a small number of high status individuals from within a local area in southern England indicates a regional significance. Five hundred  years later, a unique monument of dressed sarsen stone was raised in a superhuman feat that leaves us in awe to this day. Perhaps these postholes are the last echo of a more insular time in the history of Stonehenge and its environs .