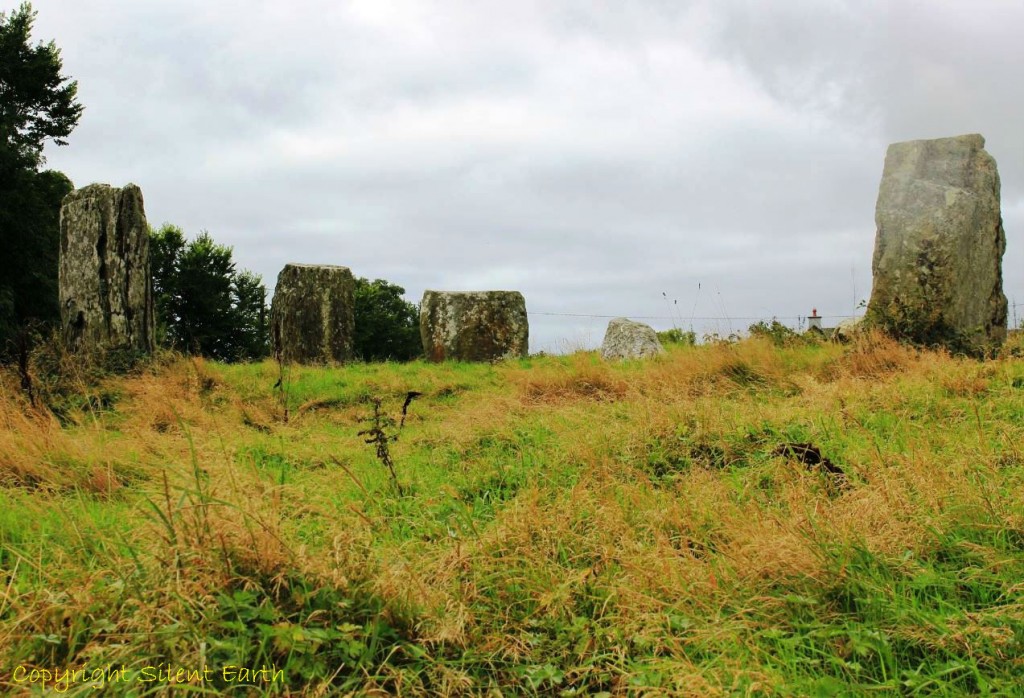 During September 2016 I spent a week in Clonaklity Co. Cork, Ireland, and at that time was provided with an opportunity to visit Templebryan stone circle and associated features, including the nearby ogham stone known as Cloughnakilla and the bullaun stone, a ‘wart well’ at the foot of the ogham stone. The location of the site is provided here by Megalithic Ireland and here on the Megalithic Portal.

Templebryan is a recumbent stone circle approximately 2.5km north of Clonakilty near the village of Shannonvale. Four of its original perimeter stones remain upright and a fifth is nearly fallen. Nine stones were recorded as standing in the eighteenth century. Off centre in the central region of the circle is a quartz stone said to be known locally as ‘Cloich Griene’, the ‘sun stone’, and possibly the stone from which the nearby town of Clonakilty ‘Clocha na Coillte‘ originally took its name. 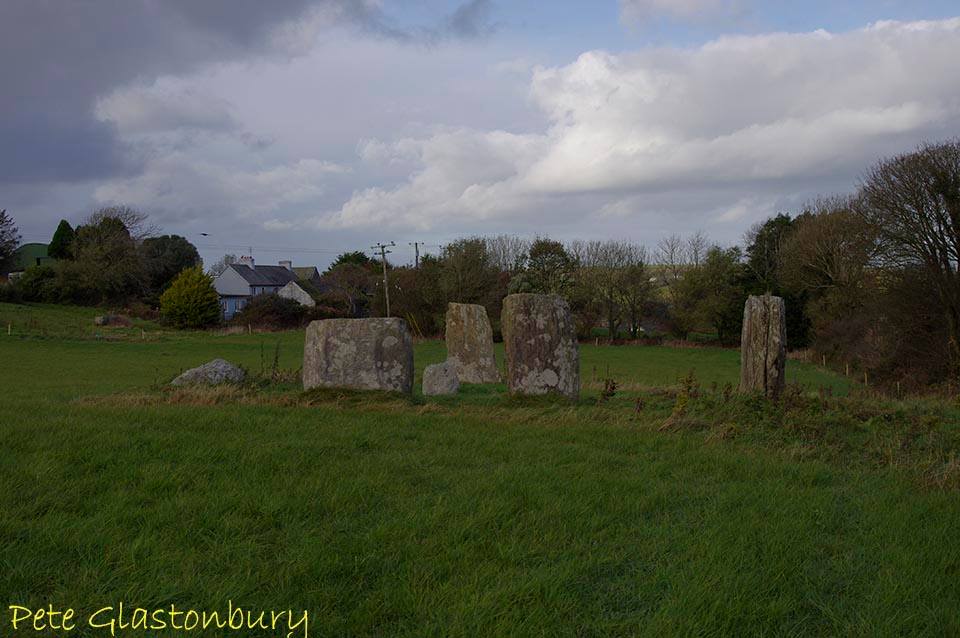 The recumbent stone has two horizontal veins of quartz running through it and its flat upper surface is another seam of quartz, perhaps a clean break at the weakest point of what was once a larger stone. Pete Glastonbury has kindly provided the photograph below of the upper surface illuminated by sun. 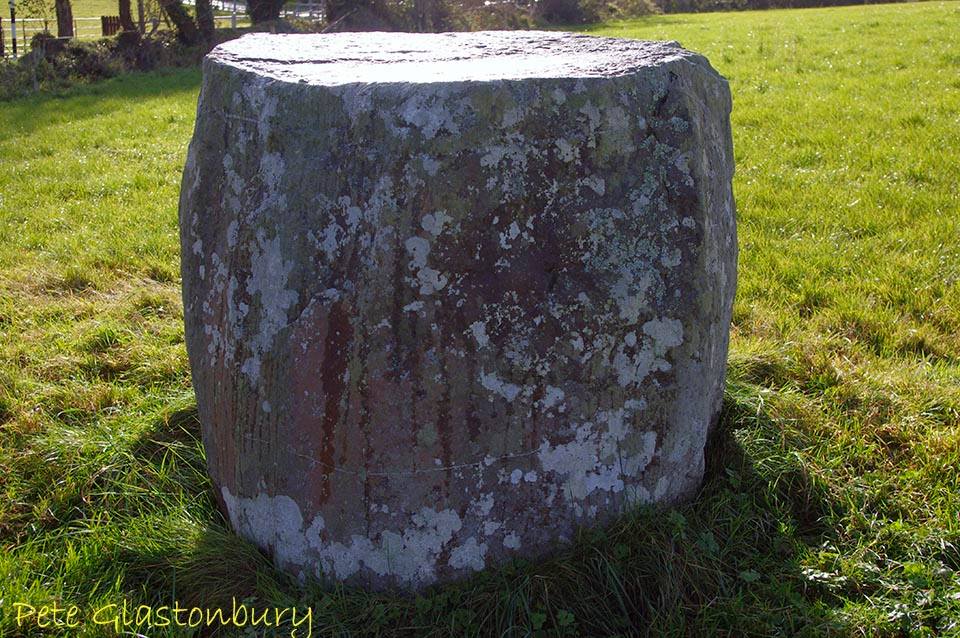 The lower two quartz veins of the recumbent stone are clearly visible in the photograph below: 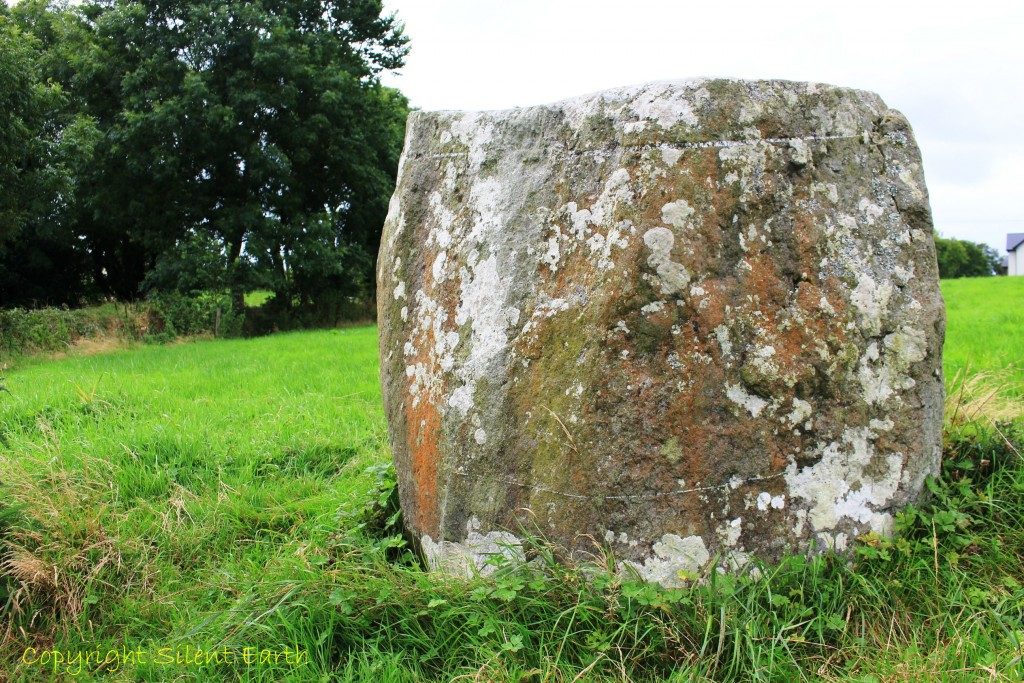 In his recently published book, Stonehenge, Avebury and Drombeg Stone Circles Deciphered, Professor Terence Meaden writes that the farmer and landowner of Templebryan stone circle, Mr. Murphy of Shannonvale near Clonakilty, told him in 2013 of the quartz stone union by shadow that takes place at midday at the winter solstice. 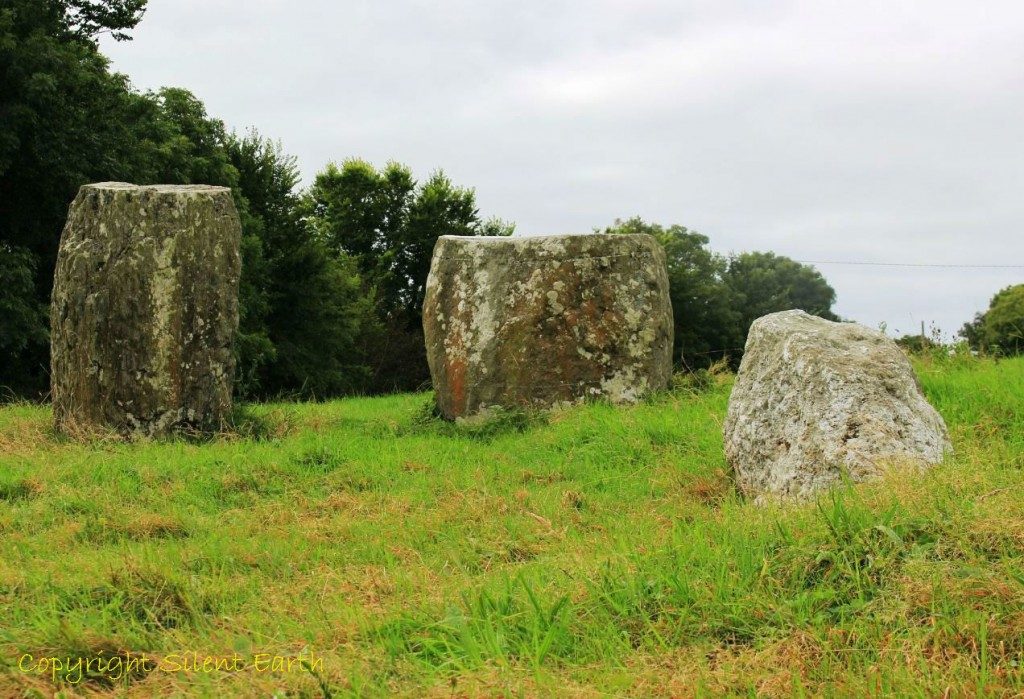 Professor Meaden subsequently visited Templebryan stone circle on 22 December 2013 and writes on page 81 of the above book ‘photographed at noon, the shadow from the straight-sided southernmost megalith reaches the quartz stone which (as at Drombeg) is off-centre in the central region of the circle. For most of the year this midday contact is not made because the shadow is too short.’ He adds, ‘Olwyn Pritchard (2016) has reported similar research in West Wales involving midday alignments at the solstice, between paired standing stones linked by shadow.’

Below: The quartz stone near the centre of Templebryan stone circle : 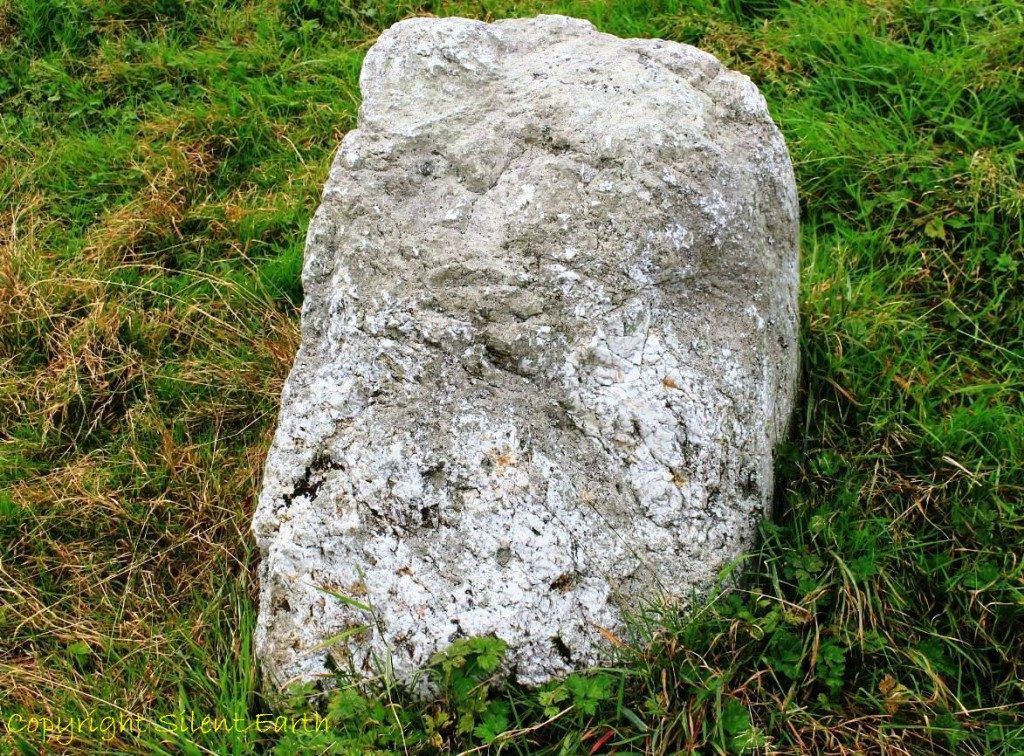 Templebryan stone circle is also known as the Druid’s Temple and its axial alignment is between 210 and 215 degrees. 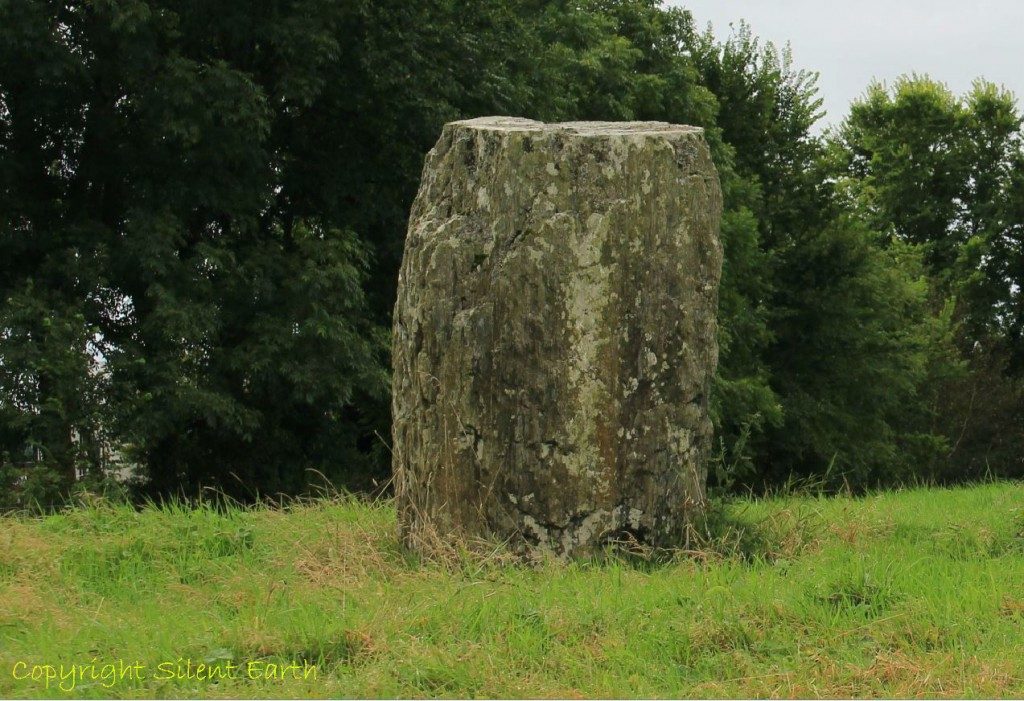 In 1743 nine stones were still standing, although by 1837 only the five stones seen today remained. 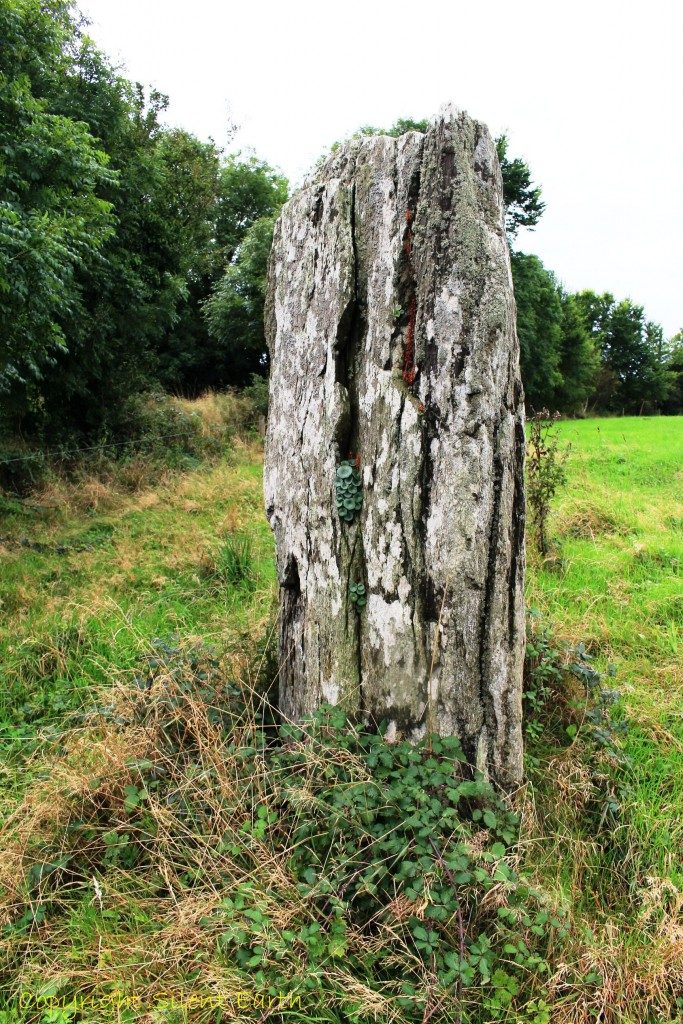 Approximately 300 metres northwest is another fascinating site described as an ‘early ecclesiastical enclosure’, which Mr. Murphy, the landowner, kindly allowed Mr. Meaden and I to visit. On arrival, Mrs. Murphy handed us a short explanatory sheet to this area, headed ‘Templebrien’, which  states: ‘A map from 1841 shows a small graveyard and within the graveyard a rectangular structure which is Templebrien church in ruins. There is an Ogham stone, a Bullaun stone, and a holy well (Tobarnakilla) and these are in the townland of Templebrien North in the ancient parish of Templebrien, now part of the parish of Clonakilty and Darrarra.

Below: Walking north along the lane-way towards the ecclesiastical enclosure, the holy well of Tobarnakilla is on the left. 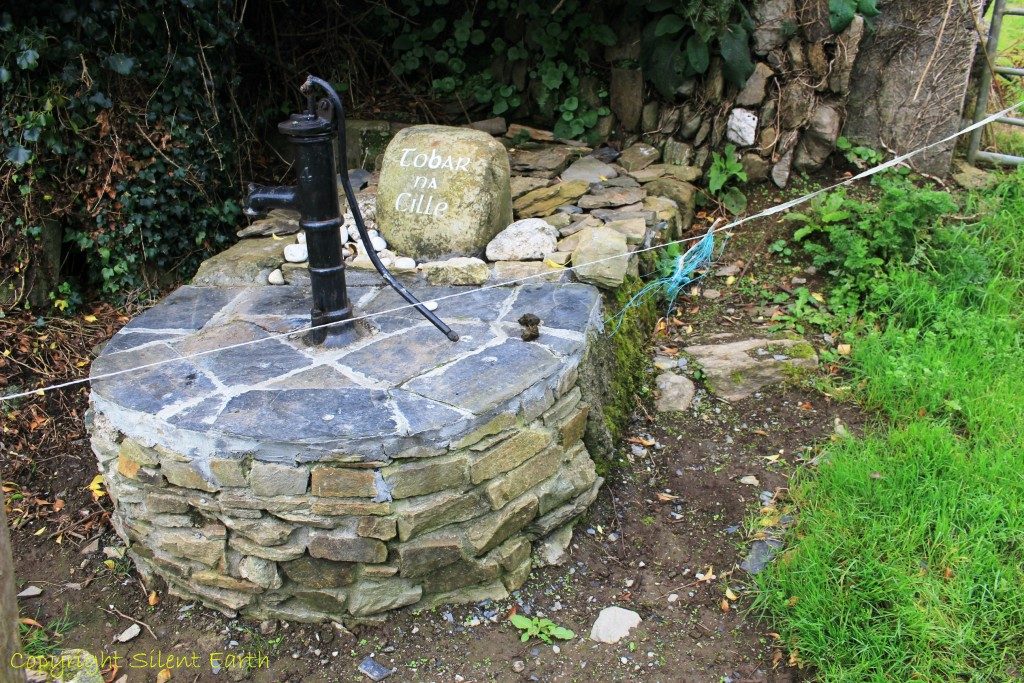 ‘Temple is usually followed by the name of the founder of the church, but the meaning of Templebrien is unclear.’

Below: The farm’s workhorse beside the well. The Ogham stone to the north is just visible here on the horizon to the immediate left of the gatepost. 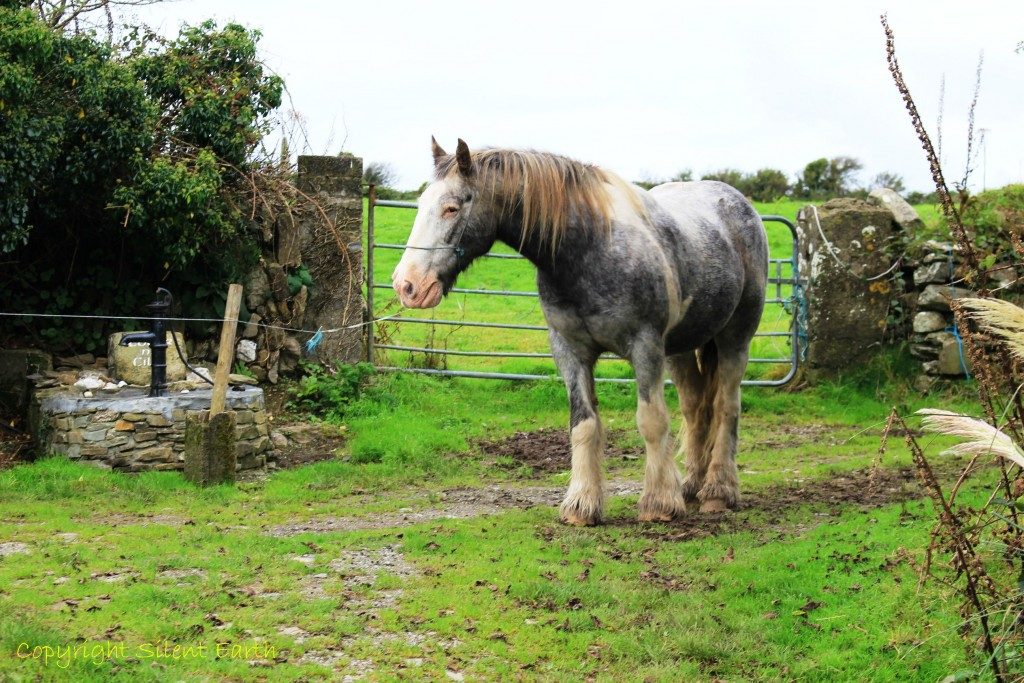 As we walked beyond the gate in the above photograph, the arrow-like Ogham stone immediately reared into view. ‘The Ogham stone, which is 10 feet high, seems to have been erected as a memorial to some person of importance, but the writing is now illegible. All of the inscription that is decipherable was ‘The soul (or remains) of Tinas, son of…’

The ogham stone is known as Cloghnakilla. 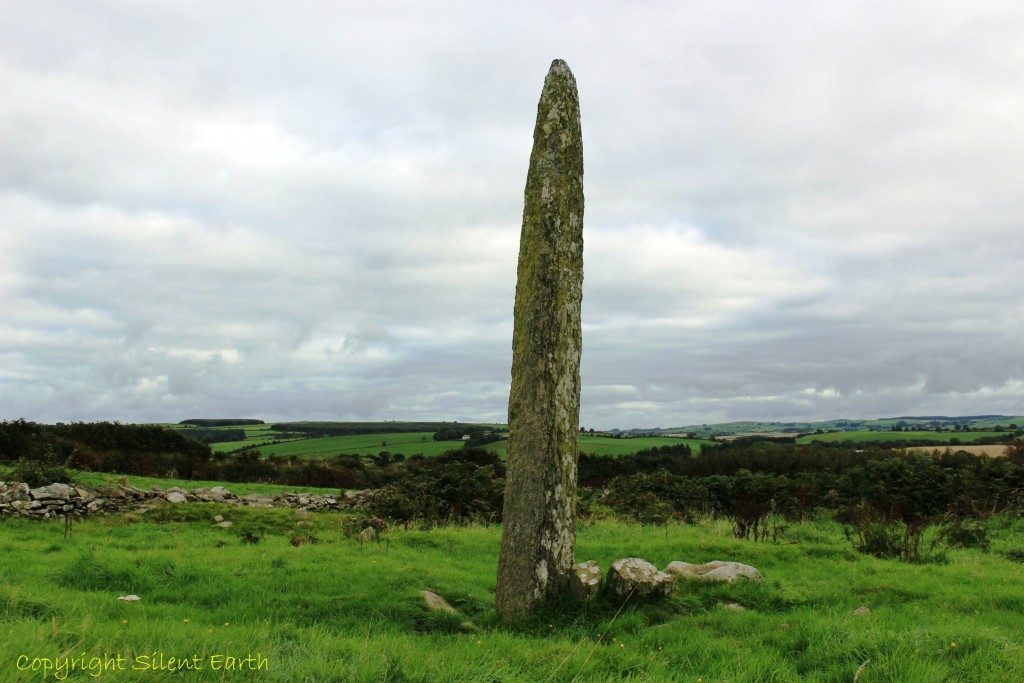 ‘Webster in 1932 referred to the bullaun stone at Templebrien as a possible ‘stoup’ (holy water font’) and cited a local tradition claiming that when the tide rose in Clonakily bay, the hollow in the stone filled with water and this water was supposed to cure warts and became known as a ‘wart well.’

Below: The bullaun stone is in the foreground here immediately south of the Ogham stone. 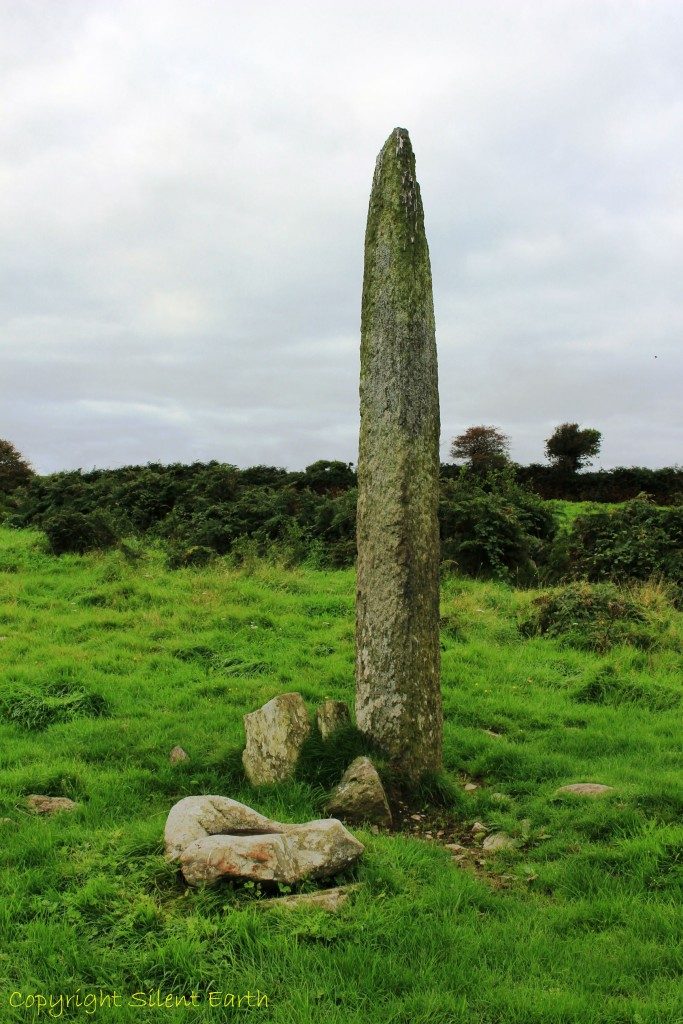 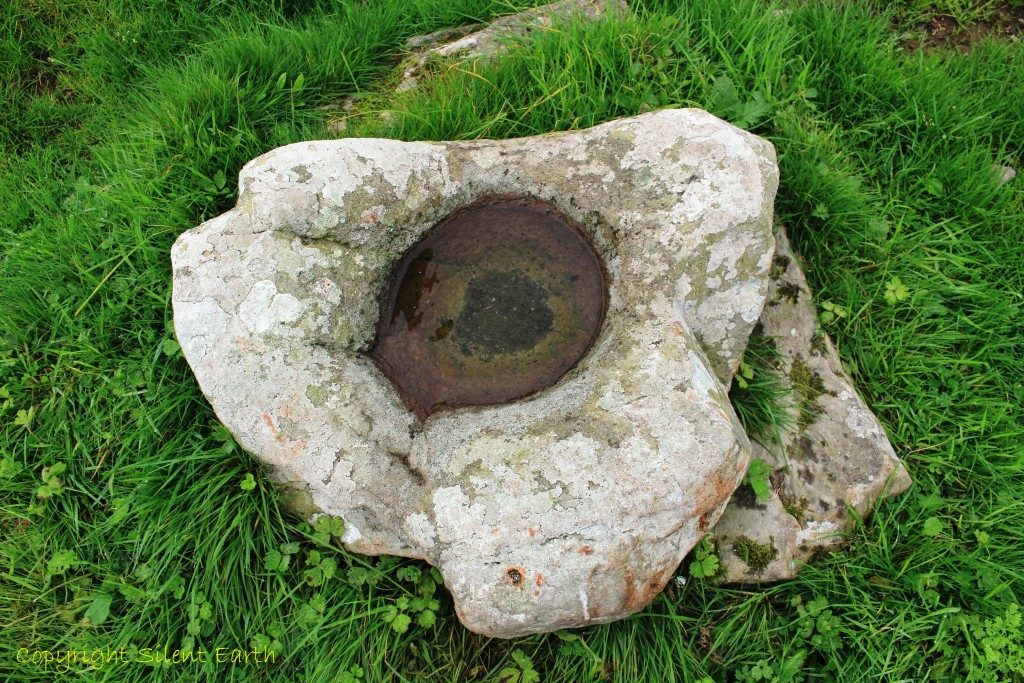 ‘There are two souterrains in the northern half of the early ecclesiastical enclosure, one of which fell in some years ago and is closed up. They are marked on an ordnance survey map from 1841 and were described by Townsend in 1810 as ‘stone built passages with capstones of slate. They have never been archaeologically investigated. Souterrains may have been used for refuge or storage.’

Below: In the foreground to the south of the of the ogham stone the remains of the northern wall of the church beyond which is the church graveyard . 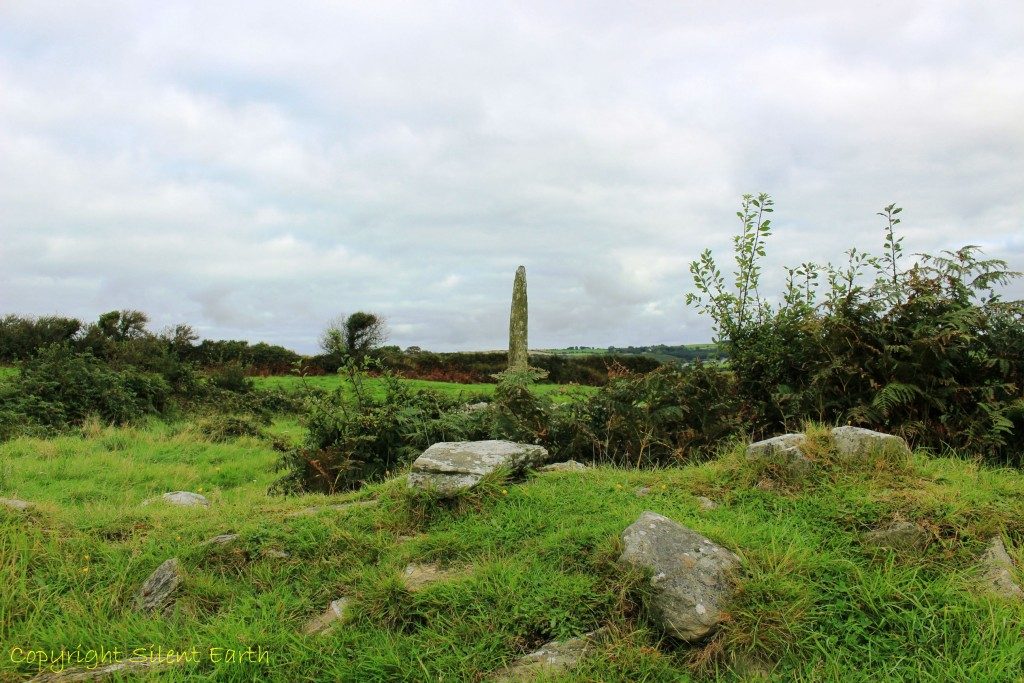 There is no documented reference to Templebrien until it is cited as a parish church in the sixteenth century. The remains of the walls of the church are at a higher level than the surrounding graveyard which was still in use in 1743 as a burial place by some of the ancient popish families in the area.’

Below: The texture of the ogham/pillar stone brings to mind a fossilised tree trunk. 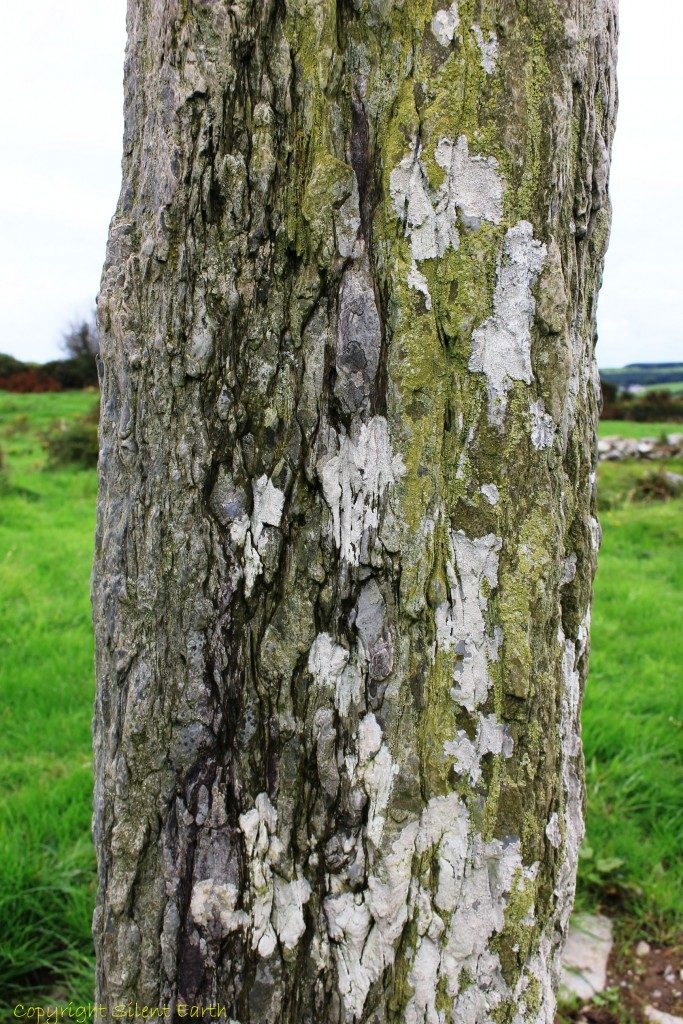 There are three defined entrances into the Kill field from the surrounding area, from the northeast, east and southeast. It has been noted that the stones of the kiln were removed by the landowner for other purposes several generations ago.

Below: Inside the ecclesiastical enclosure. 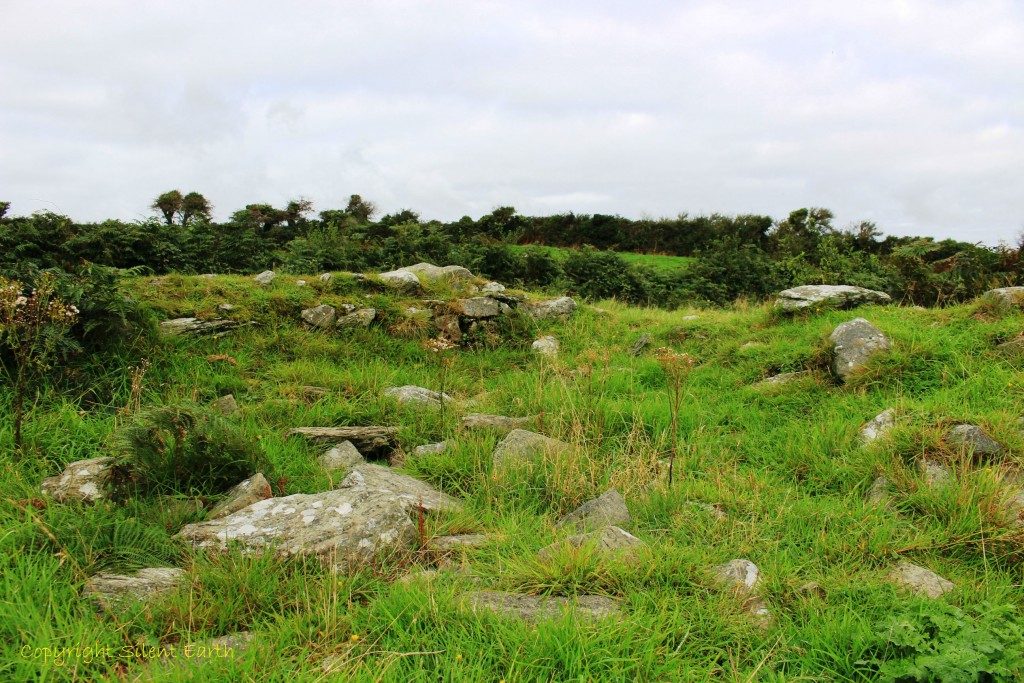 ‘Hurley in a survey in 1980 claims that many sites like Templebrien declined in importance towards the end of the early Medieval period and that is why they have retained much of their character and layout.’ 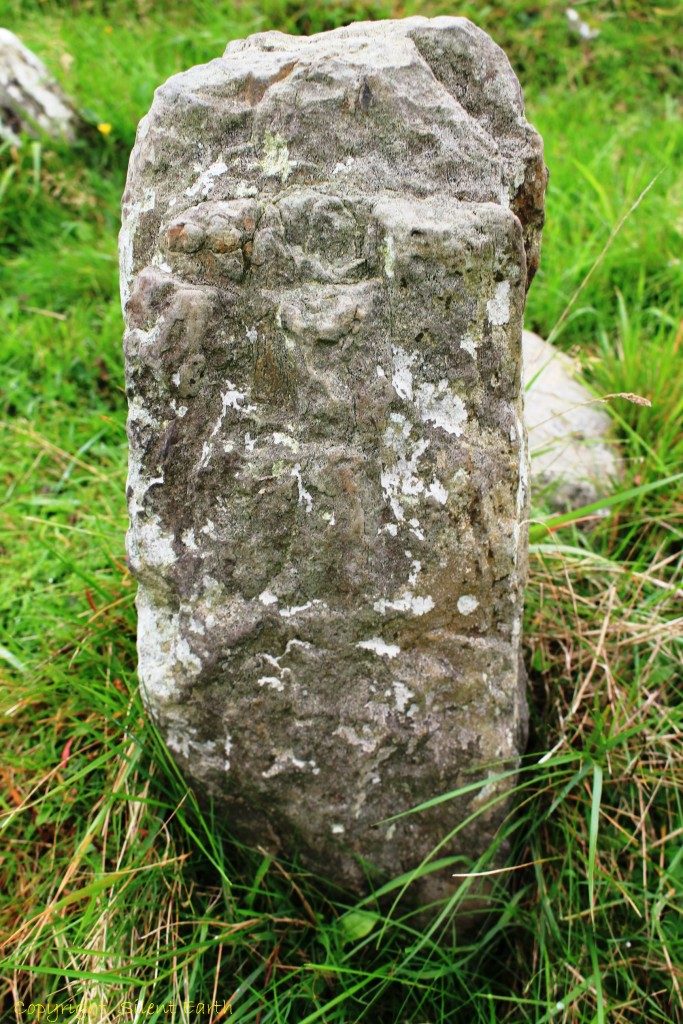 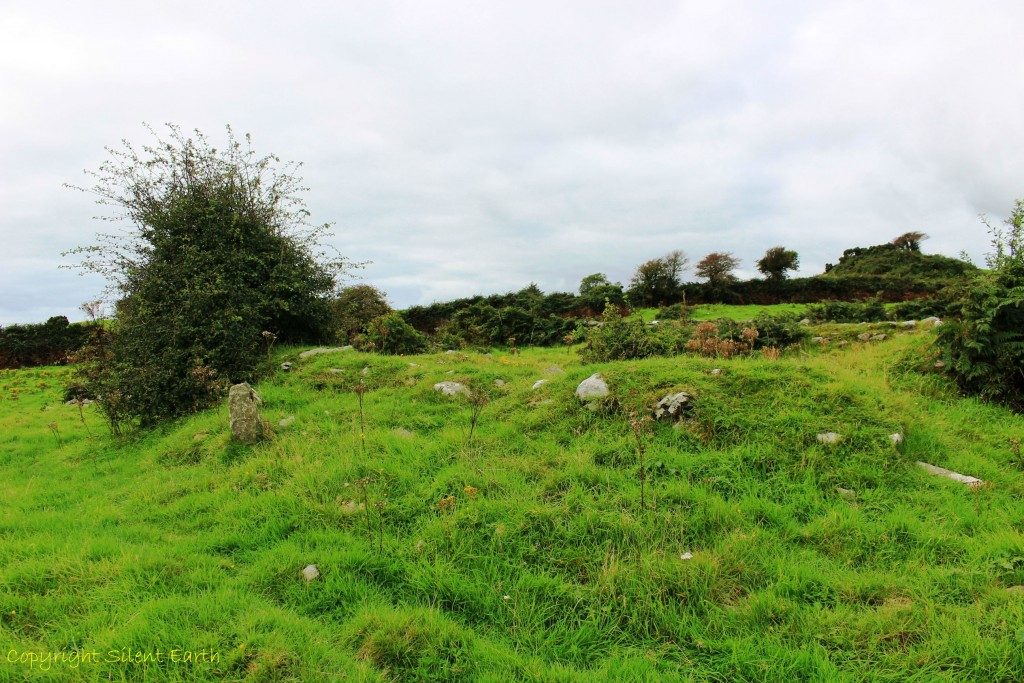 Thank you to the landowners for such kind and hospitable access, to Terence Meaden, my guide on the day, and Pete Glastonbury for use of two photographs. 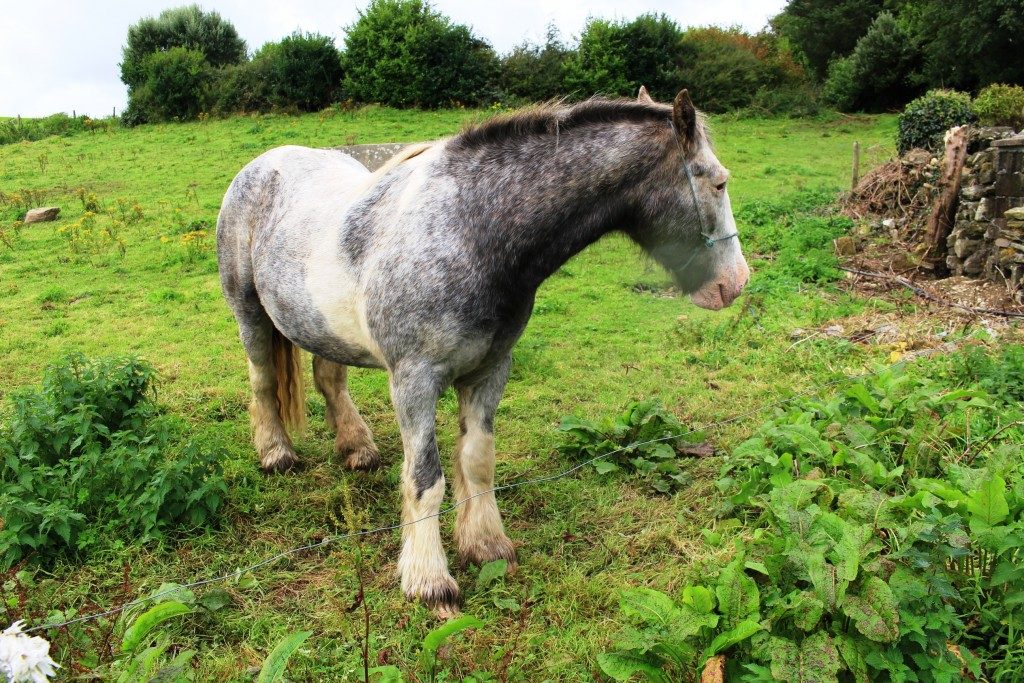