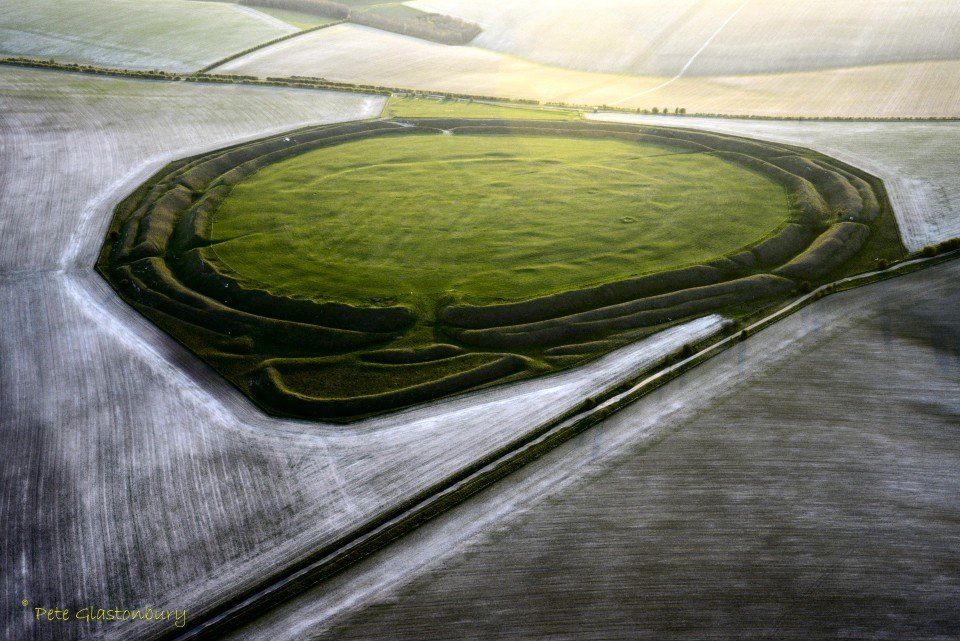 WRITTEN BY Austin Kinsley ON 01/06/16. Iron Age Hillforts in Wiltshire POSTED IN General

The above photograph, taken by Pete Glastonbury from a microlight aircraft, is of Yarnbury Castle, an Iron Age hillfort in Wiltshire, described by Historic England on Pastscape as ‘A multiphase, multivallate hillfort of 28.5 acres. The earthworks were surveyed by RCHME in 1991 and a full descriptive and analytical account can be found. Excavations have recovered Iron Age and Roman pottery, as well as inhumations, in both graves and pits, as well as other human remains. Iron Age and Roman coins were also found.

Within the main hillfort is an earlier enclosure 5.2 hectares in area. Intensity of occupation in the main hillfort is demonstrated by the recognition during the RCHME survey of over 130 probable structures, presumably representing the sites of round houses, as well as pits and other features. Between the earlier circuit and the inner rampart, a number of large compounds are visible, with possible stone footings discernible in many. In the southeast quadrant of the hillfort are the remains of the Winterbourne Stoke sheep fair, which was held biannually until 1916, when the surrounding area was commandeered by the army. The most prominent features are the sheep folds, a rectangular area 120 metres by 90 metres and consisting of 16 low mounds in two blocks of 8. The present sheep fold is probably of 19th century date, although the antiquity of the sheep fair itself is unknown.

The discovery of Roman material, including pottery, tiles, coins and burials, during both excavation and on other occasions, has led to the site’s inclusion in Scott’s Gazetteer of Roman Villas. More on Yarnbury Castle and hillfort here, here and here.  Archaeological finds from Yarnbury Castle and in Wiltshire Museum are listed here.

The Winterbourne Stoke sheep fair was held on the site from the 18th century until 1916. Ella Noyes (1863–1949) from Sutton Veny wrote in her book Salisbury Plain, published in 1913:

‘Once a year Yarnbury becomes re-animate, on the day of the Horse and Sheep Fair, on the 4 October held in this lonely trysting place by immemorial tradition. Here.. the flocks..stand close packed in pens; bunches of young ponies are tied up in one corner.. and near by are the sober cart-horses, their plaited manes and tails aprick with ornaments of straw. The vendor of sheep bells spreads his metal wares upon the ground.. the purchase of sheep bells is a serious matter, good ones costing as much as five shillings..In the good old days, up to within the memory of people still living, the fair was followed by horse races next day, and sports of all kinds. But now the pleasure part of the meeting has been abandoned; the folk disperse quietly soon after noon, when business is done, leaving Yarnbury to the silent occupation of its prehistoric ghosts for another year.’

The Iron Age hillforts in Wiltshire are listed and mapped here. 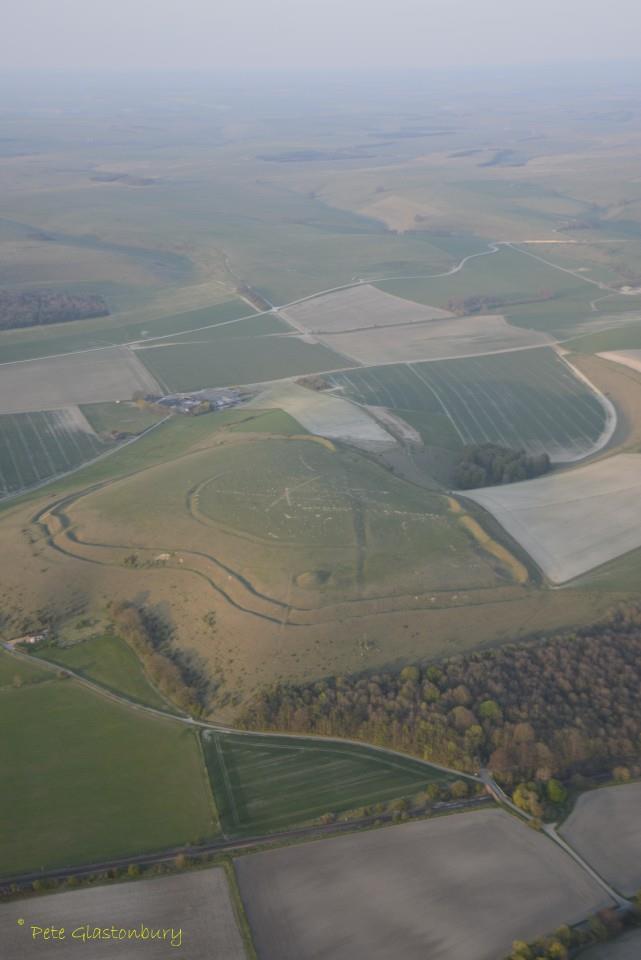 The above photograph is Scratchbury Camp, described by Historic England on Pastscape as ‘a univallate hillfort covering approximately 17ha. It is best preserved on its western side where the ditch is between 5 and 8 metres wide and up to 1 metre deep. The bank and ditch are both uneven in height and depth which is thought to be an original testament to the ‘group dug’ nature of the earthworks. There are three breaches in the bank which appear to be original. The north and west areas of the hillfort were densely populated with up to 100 structures present, visible as relatively shallow depressions.

A D-shaped enclosure in the centre of the hillfort was previously interpreted as a Neolithic causewayed enclosure due to its interrupted nature and the discovery in the hill of jade and flint axes. Excavations by W.F. Grimes have since shown this to be an Iron Age enclosure, with Iron Age pottery in the primary fill, and the interruptions were probably been made by post-Medieval ploughing. All that really remains of this enclosure is one well-defined lynchet.

There are also six round barrows on the hill, and in 1804 it was reported that a Roman bronze spoon had been discovered. Roman pottery was also recorded by Colt Hoare.’

The Iron Age hillfort dates to around 100 BC, but contains the remains of an earlier and smaller D-shaped enclosure or camp. The age of this earlier earthwork is subject to debate.

Along the grave green downs, this idle afternoon,
Shadows of loitering silver clouds, becalmed in blue,
Bring, like unfoldment of a flower, the best of June.

Shadows outspread in spacious movement, always you
Have dappled the downs and valleys at this time of year,
While larks, ascending shrill, praised freedom as they flew.
Now, through that song, a fighter-squadron’s drone I hear
From Scratchbury Camp, whose turfed and cowslip’d rampart seems
More hill than history, ageless and oblivion-blurred.

I walk the fosse, once manned by bronze and flint-head spear;
On war’s imperious wing the shafted sun-ray gleams:
One with the warm sweet air of summer stoops the bird.

Cloud shadows, drifting slow like heedless daylight dreams,
Dwell and dissolve; uncircumstanced they pause and pass.
I watch them go. My horse, contented, crops the grass.

The Wikipedia entry for Scratchbury Camp is particularly informative here and further information is available here and here. 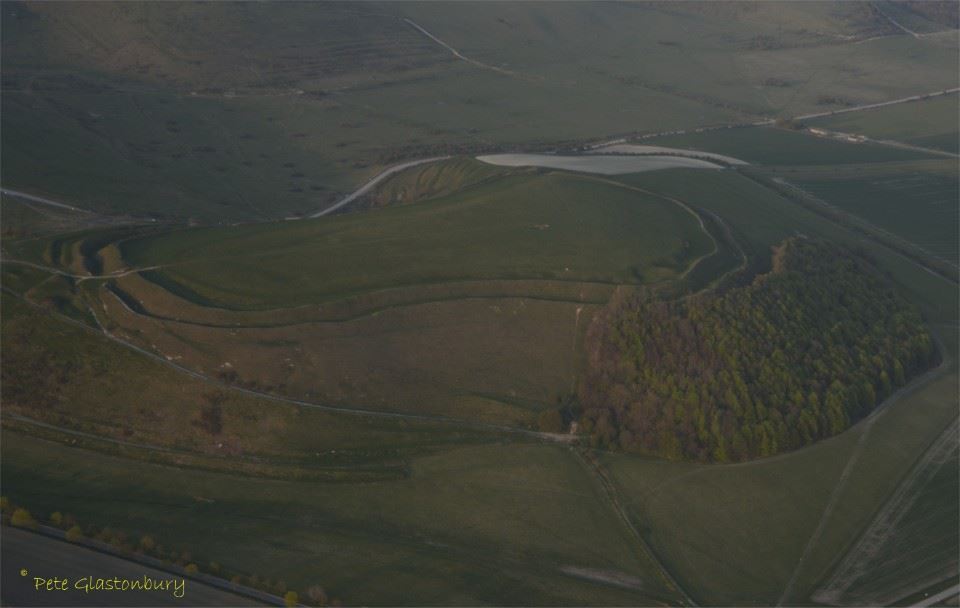 The above photograph is Battlesbury Camp, described by Historic England on Pastscape as ‘earthwork remains of an Iron Age multivallate hillfort with possible Early Iron Age occupation. Battlesbury is situated at the south end of a chalk promontory which is a south extension of Salisbury Plain. It is defined by steep slopes to the W, S and NE. Those to the E and NW are more gentle and the defensive circuit reflects this topography. The enclosure is bivallate, and 9.7ha in extent. It consists of an inner rampart and ditch and an outer rampart. The NW sector is further protected by two additional ramparts and ditches. To the S and E the base of the outer rampart is indistinguishable from the steep natural scarp. Strip lynchets have been created on the NE and SE slopes below the hillfort. A massive lynchet within the enclosure runs parallel to the inner rampart. In the S angle of the enclosure there are 3 round barrows (ST 84 NE 1) between the inner rampart and internal lynchet. There are two original entrances, the first to the NW is 6 to 8m wide, the second to the E is 5 to 6m wide. The interior of the site has been under cultivation for a considerable time. Present day land usage is confined to rough pasture, but the lynchet which runs immediately behind the inner rampart represents the accumulation of soil from a long period of cultivation. Consequently, no earthworks survive in the interior. However, aerial photographs suggest that there may have been a field system of unascertainable relationship to the hillfort within its interior. A Roman coin hoard consisting of 36 coins of Antoninus Pius (AD 138-61), Julia and Constantine (AD 306-337), was found in 1773. Possibly an early 4th century hoard.’

More on Battlesbury Camp here, and here and on its archaeology here. 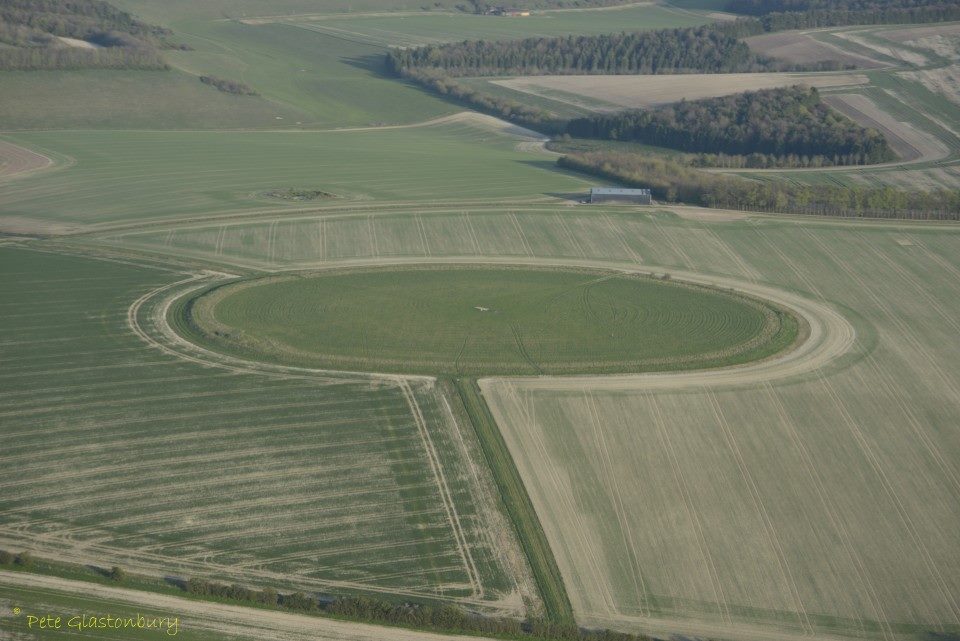 The above photograph is Codford Circle, described by Historic England on Pastscape as ‘An earthwork hilltop enclosure situated on the crest of Codford Hill, a chalk promontory of Salisbury Plain. An elevated oval area of 3.6 hectares is surrounded by a bank 6.5 metres wide and up to 1.6 metres high from the outside. This is surrounded by a ditch 5 metres wide and up to 0.5 metres deep except for a section around the southeastern edge where it has been reduced by ploughing. Air photographs taken in 2001 revealed an inner ditch, probably a palisade, running concentric to the earthwork and with clear opposing entrances to the east and west. Entrances on the southeast and northwest through the earthworks are modern.’

Digital Digging here, indicate ‘three exploratory trenches in 2006 confirmed an Iron Age date from the external ditch and from the internal pits. Excavation of the low 0.4m high bank and ditch revealed a steep almost V-shaped ditch 4m wide x 2.1m deep, lying below a thick 0.3m buried soil. Although plenty of animal bone and worked flint were recovered, there was little pottery, and although undiagnostic, this was probably Iron Age.’

More on Codford Circle here and its archaeology here. 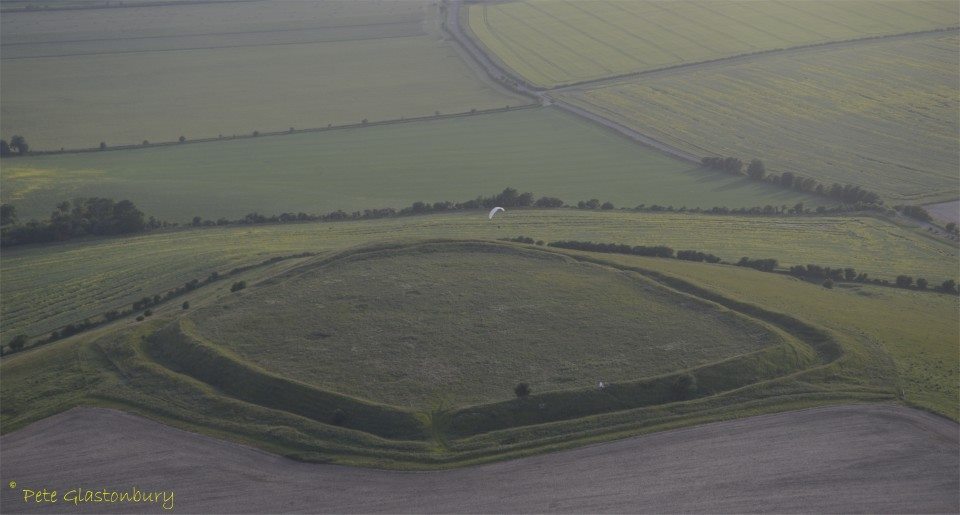 The above photograph is Liddington Castle, described by Historic England on Pastscape as ‘The earthwork remains of a small univallate hillfort, situated on a flat plateau on the summit of Liddington Hill. The hillfort is sub-trapezoidal in plan and consists of a bank, ditch and counterscarp bank following the natural contours of the hill and enclosing an internal area of approximately 3 hectares. There is one original entrance located on the eastern side and a blocked entrance on the west. The inner bank measures 12 metres across and is up to 3 metres above the interior ground level. The surrounding ditch is up to 18 metres wide. The couterscarp bank stands up to 6 metres high above the ditch and is most prominent on the northern and western facing slopes. A small scale excavation in 1976 found that the rampart was constructed in at least four phases, the earliest being of the 7th-6th centuries BC. Finds from the site have included Bronze Age, Roman and Saxon pottery.’ 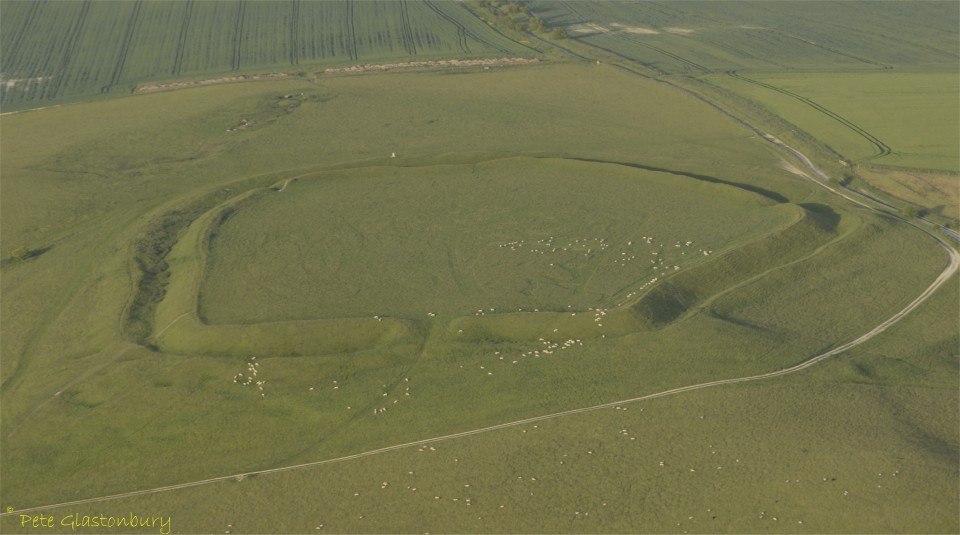 Just outside Wiltshire to its north east in Oxfordshire is Uffington Castle photographed above and described by Historic England on Pastscape as ‘An univallate Iron Age hillfort. It is D-shaped, enclosing 3 hectares, with a rampart and ditch, counterscarp bank, and a single western entrance. Limited excavation in 1853-8 and in 1922, indicated that the inner bank appeared to be sarsen faced, and two rows of postholes suggest either a timber palisade or posts were incorporated in the facing. Excavations in 1989-90 identified two phases of rampart construction, the earliest, early Iron Age in date, comprising box rampart with a backing ditch. A blocked entrance was identified in the eastern rampart, and dated to the 8th to 7th centuries BC. It would have had a gatehouse, and the large post pits belonging to this structure were identified. This phase was succeeded, on almost the same alignment and after a period of abandonment, by a dump rampart with a large V-shaped ditch. A parapet wall was also present. Breaches in the ramparts on the northeast and southeast sides appear to be Roman in date.

Geophysical surveys of the interior indicated the site was probably not densely occupied or long-lived. Possible posthole structures were located in the southwest corner of the hillfort but remain unexcavated. Other magnetic responses are thought to originate from the remains of post-medieval fairs. Excavations of further interior features (pits, gullies, and postholes) in 1994-5, identified late Bronze Age activity (8th century BC), but in the main the features were of early Iron Age date (7th century BC), with some middle Iron Age activity (4th century BC). Roman features included an oven or corn drier. During the Anglo-Saxon period the hillfort acted as a boundary marker for the Uffington and Woolstone estates. Some more ephemeral features in the interior may have been lost due to medieval and later ploughing, evidenced by ridge and furrow earthworks. It was cultivated as recently as 1956 until the Ministry of Works re-established grassland.’

Thank you to Pete Glastonbury for sharing these photographs and  Historic England Pastscape for information on these sites.