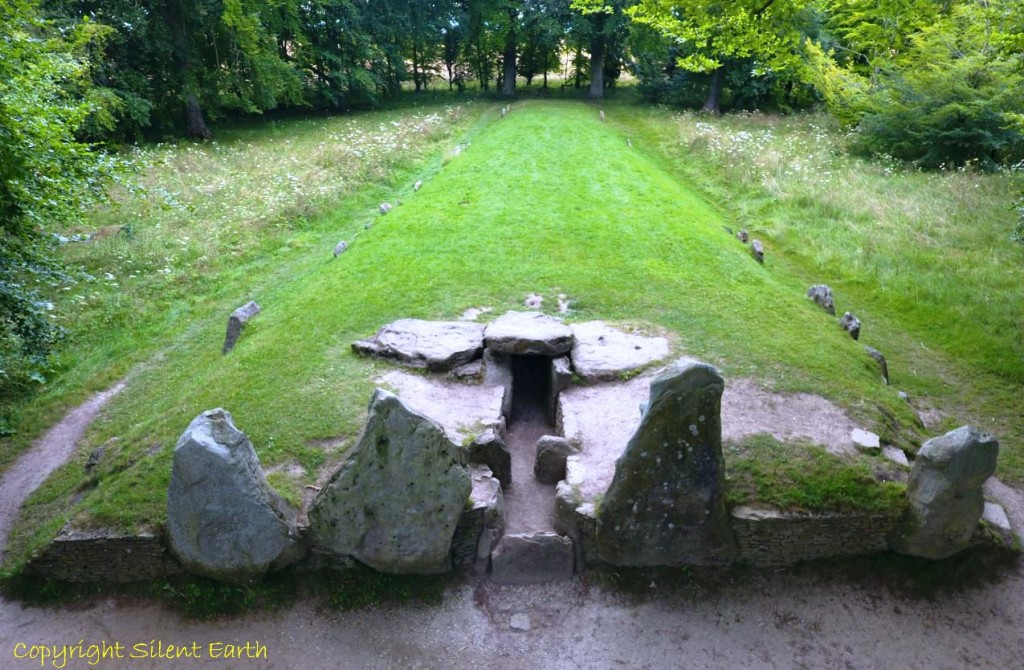 WRITTEN BY Austin Kinsley ON 12/08/16. Wayland’s Smithy POSTED IN General

Wayland’s Smithy, along with the White Horse of Uffington, is iconically etched into my mind from a visit as a seven year old child in 1969. A particular moment from that afternoon, clambering into the entrance passageway and chamber with my Uncle Mike — similarly to hearing of the death of John Lennon, Princess Diana and the 9/11 attack — is as fresh in my mind today as when it happened on that summer’s afternoon 47 years ago. With the benefit of hindsight, it was the actual moment that sparked my subsequent lifelong interest in and yearning to know of our inscrutable prehistoric ancestors. 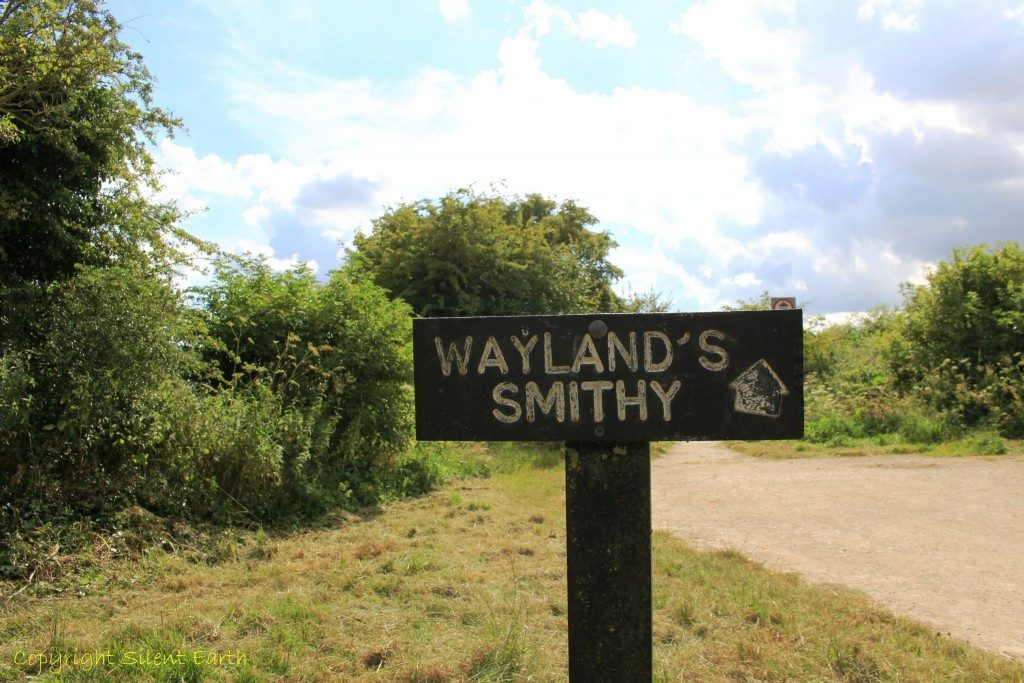 The chambered long barrow is a little south of the crest of the Berkshire Downs and about a mile west of the white horse of Uffington. It was partially excavated by Sir Charles Peers and Mr. Reginald Smith in 1919-20. In 1962-63 the site was re-excavated by Professors Atkinson and Piggott, who restored it to its ‘appearance in antiquity, so far as the surviving features allow.’ The excavation revealed that it succeeded a small oval barrow on a similar alignment, as shown in the sketch below.

It is described by Professor Richard Atkinson as, ‘the remains of a trapezoid mound, 180 ft. long, tapering in width from 48 ft. at the southern end, to 20 ft. at the northern. Its lower part was composed of earthy chalk rubble derived from the upper levels of a pair of lateral ditches, up to 15 ft. wide and 6 ft. deep, separated from the mound by berms 20-30 ft. wide.’ He adds, ‘The sides and back of the barrow had been delimited by a continuous kerb of sarsen slabs set against the margins of the mound, without stone holes. To the north of Barrow 1 (the older one). All the kerbstones had been dug out and removed, but their original line was shown unequivocally by surviving packing stones and robber trenches.’ He later adds ‘as at West Kennet, the spaces between the uprights of the facade had been filled with panels of dry walling.’

Wayland’s Smithy is a long barrow whose orientations lie beyond the limits of solar and lunar risings and settings. It has been calculated  by Dr. G.T. Meaden in Long Barrows of North and Mid Wessex to be constructed on an axis of c.165 degrees. He adds, ‘Excavation revealed it succeeded a smaller oval barrow on a similar alignment built two centuries earlier (Atkinson 1965). Thus early in the Neolithic, before the era of galleried long barrows,the community raised a mound, and subsequently, when preparing a new mound, they enveloped the old by the new, maintaining the original axis. Continuing an old tradition was perhaps enough to account for the unusual orientation of the barrow that is there today.’ 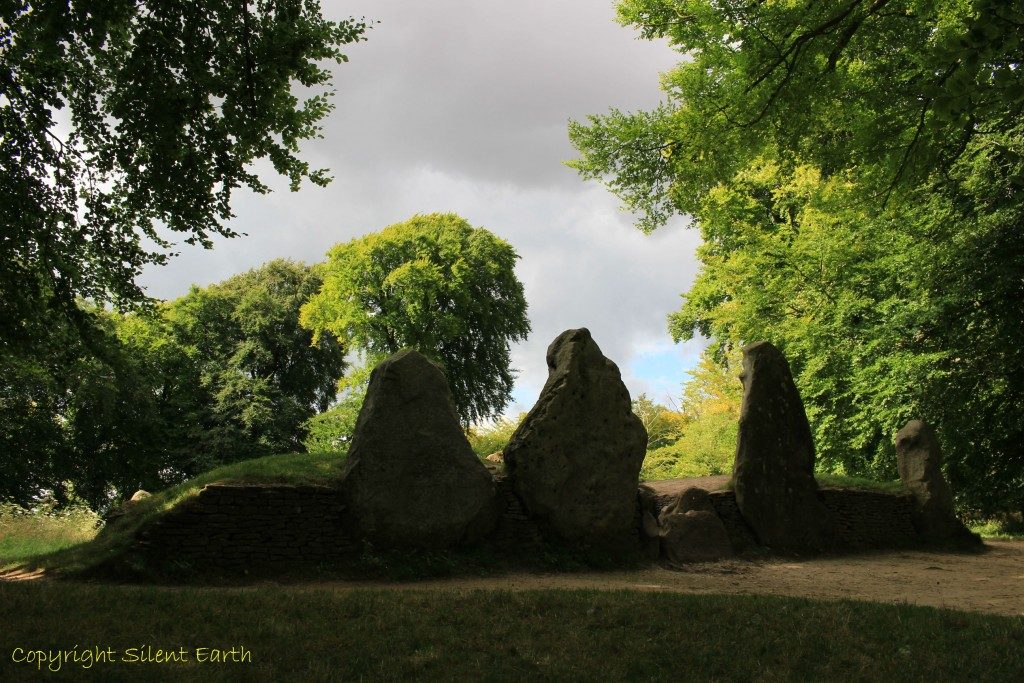 Wayland’s Smithy is equally famous for a local tradition that is said to go back at least a thousand years, that of Wayland Smith, who is said to have had his smithy in the megalithic chamber. The antiquary Francis Wise wrote a letter to a Doctor Mead in 1738 Concerning Antiquities in Berkshire, stating ‘At this place lived formerly an invisible smith, and if a traveller’s horse had lost a shoe upon the road, he had no more to do than bring the horse to this place with a piece of money, and leaving both here for some little time, he might come again and find the money gone, but the horse new shod.’ I remember Uncle Mike recounting a version of this story to me as a seven year old child when visiting the site for the first time. The story imbued it in my mind with a special kind of magic, in which Wayland still haunts my imagination to this day. More on the Wayland the Smith’s tale here. 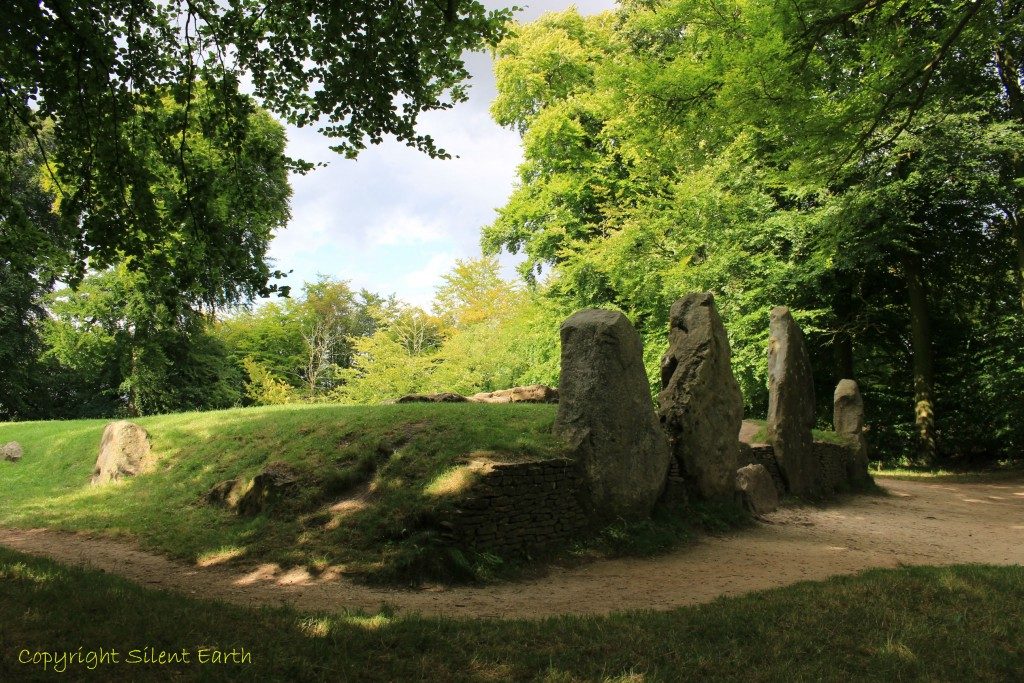 During their 11 weeks of excavations in 1962 and 1963, Professors Atkinson and Piggott in the older Barrow 1 discovered ‘on the pavement and overlapping the banks of sarsen stones at their base the skeletal remains of at least 14 individuals.’ Professor Atkinson wrote ‘A preliminary examination suggests that the central deposit contained the representative remains of nine or ten adults, mostly young, and parts of the skeleton of a child of about nine years of age, a further three or four adults being represented by skulls and fragments only.’ He adds, ‘To explain the state of the bones at the time of deposit on the pavement, it seems necessary to assume that the bodies had been exposed and stored, for varying periods after death, in circumstances which precluded the access of rodents or other mammalian carnivores, but allowed the removal bodily of the smaller bones, presumably by buzzards, crows and other carrion-eating birds’ He later concludes, ‘In general, however, the evidence seems to require the provision of some kind of platform, elevated above the ground and thus out of the reach of mammals, but open to the sky and birds of prey. Such a platform may well have been supported by the posts standing in the two lines of converging post holes found immediately south of the pavement.’

These people were placed in the earlier and lower burial structure approximately 5,586 years ago, English Heritage indicating that they were interred ‘between 3590 and 3550 BC.’ 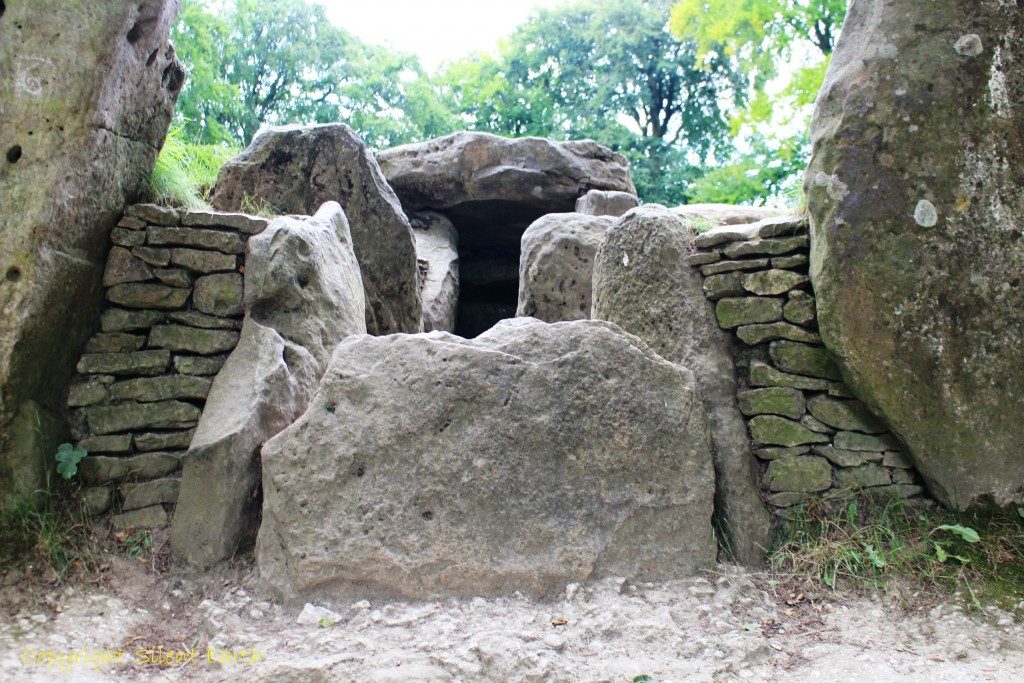 During the earlier excavations in 1919, eight skeletons, including one of a child, were found in the second larger barrow constructed on top of the earlier structure, dated by English Heritage to between 3460-3400BC. 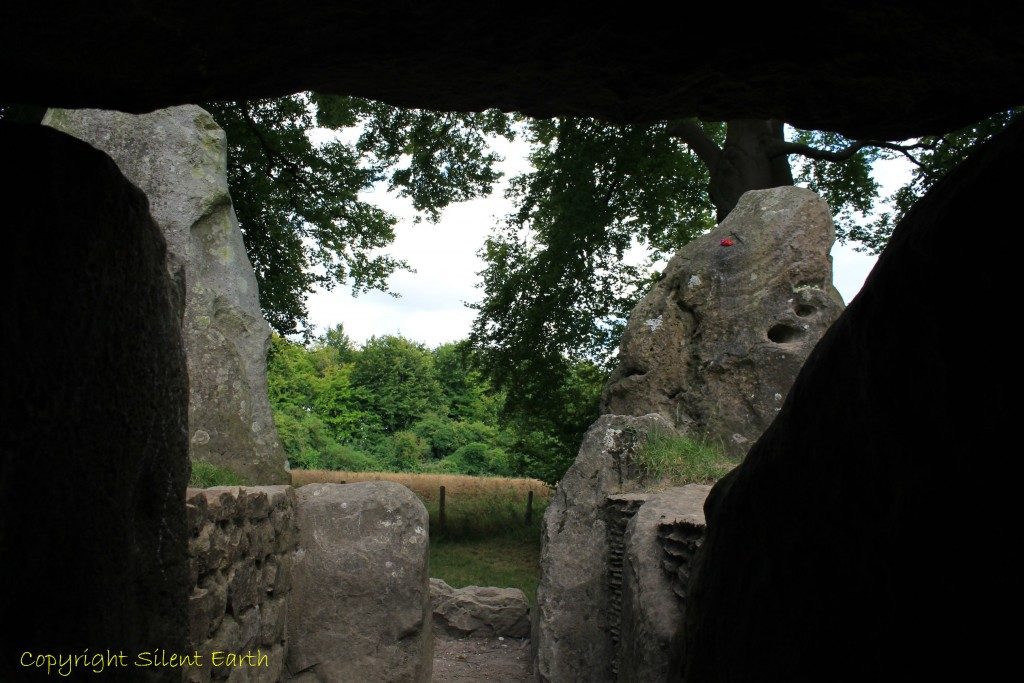 The 1962-63 excavations revealed grave goods consisting of three well made leaf-shape arrowheads of flint, the points of which had been broken off and discarded before burial, and each of these on excavation was discovered to have been laid in contact with a pelvis. One stone in the pavement, to the west of the head of the single burial to the north end, had been used on both faces as a saucer quern, and reused on one face as a polissoir for the sharpening of flint or stone axes. 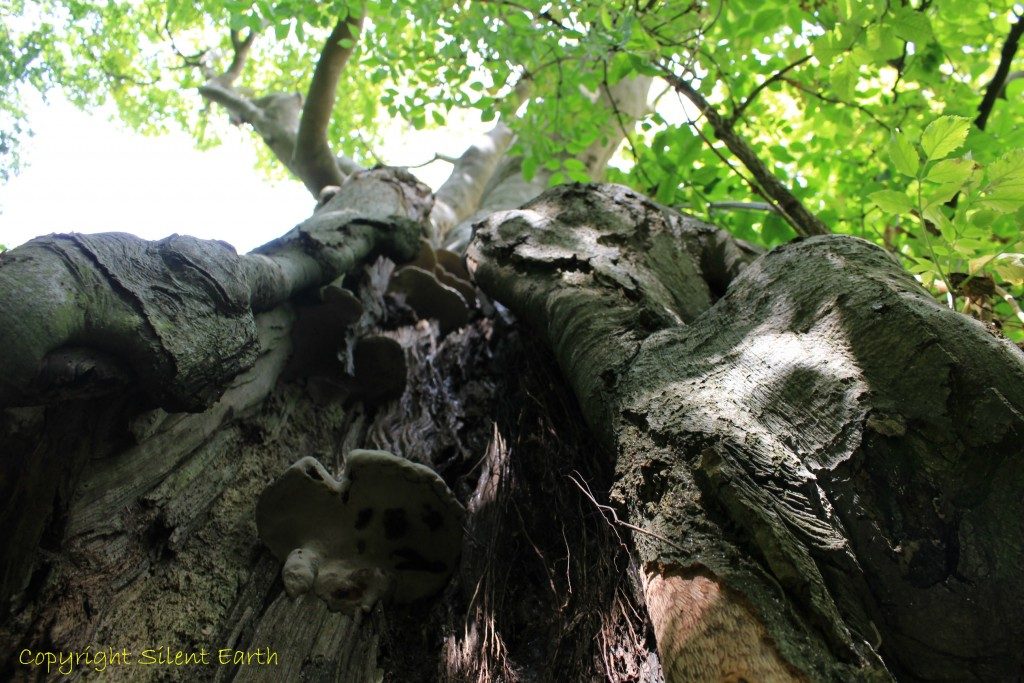 A beech tree at Wayland’s Smithy.

Welund tasted misery among snakes.
The stout-hearted hero endured troubles
had sorrow and longing as his companions
cruelty cold as winter – he often found woe
Once Nithad laid restraints on him,
supple sinew-bonds on the better man.
That went by; so can this. 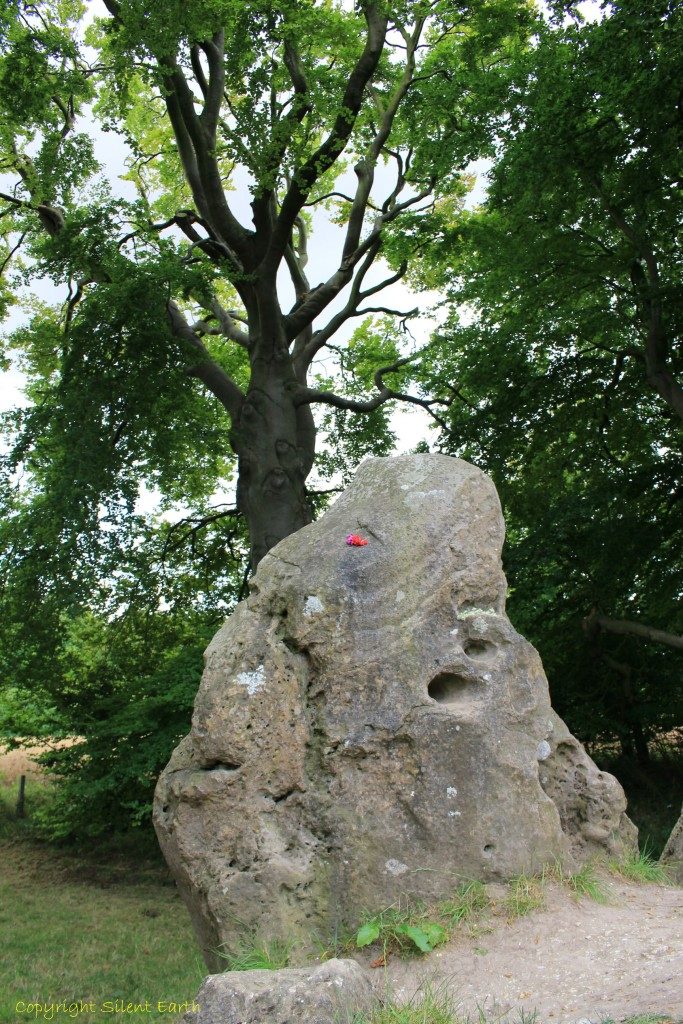 If you along the Rudgeway go,
About a mile for aught I know,
There Wayland’s cave then you may see,
Surrounded by a group of trees.

They say that in this cave did dwell
A smith that was invisible;
At last he was found out, they say,
He blew up the place and vlod away.

To Devonshire then he did go,
Full of sorrow, grief and woe,
Never to return again;
So here I’ll add the shepherd’s name – 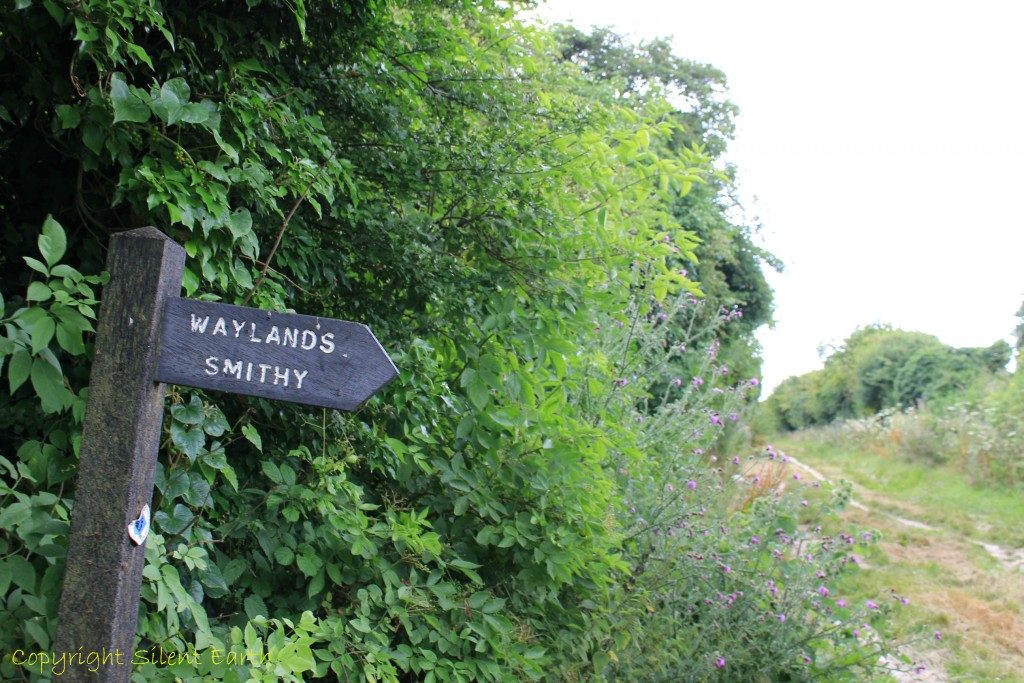