The White Horse of Stonehenge 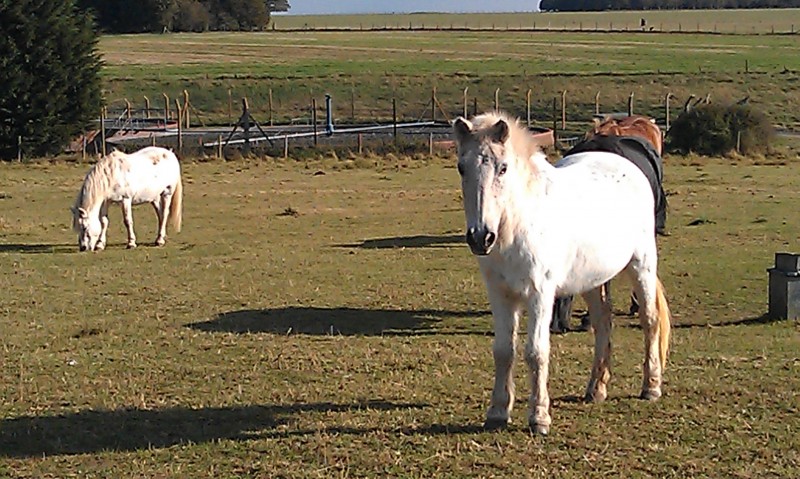 WRITTEN BY Austin Kinsley ON 04/06/14. The White Horse of Stonehenge POSTED IN Stonehenge

The white horse of Stonehenge.

The photograph above was taken at 3:10pm in the afternoon of 14 October 2011, an exceptionally hot autumn afternoon for mid-October. The picture, on the face of it, is an average snapshot. Two aspects of this image do give it a special significance to me, though — namely, the white horse (or pony) in the foreground and the location. At the top, towards the right-hand side of the image is Fargo Plantation at the western end of the Stonehenge Cursus. The horses are in a small paddock to the north of the Stonehenge monument and west of the rather less iconic sewerage works. The horse in the foreground appears to be looking directly at the camera with a calm and extremely knowing look in its eye. These are the only horses I have seen in recent years close to the Stonehenge monument.

I was a child of the south coast with the golden sands of Bournemouth beach and the English Channel as a backdrop to my formative years. One of the earliest family holidays I recall in 1968 was visiting relatives who lived inland in the ‘country’ at Stanford in The Vale, Oxfordshire. One of three vivid memories of that holiday remain with me to this day is seeing the White Horse of Uffington for the first time. The pristine white chalk of a green hillside sculpted long ago into a simple yet beautiful image of a horse was magical to the eyes of a seven year old child. It is to this day the most iconic image of prehistoric artwork welded into my mind.

G.K. Chesterton, The Ballad of The White Horse and here.

Was this white horse once revered as the bringer of Sun to the flint and chalklands of southern Britain, hovering midway above men and below the sun itself as a bold statement of the local tribe? White horses exude a natural grace, a contributing factor, no doubt, to their universal mythologising. The most famous was Pegasus, obeisant only to Zeus, king of the gods and friend to the muses.

Could the white horse myth have any association with Stonehenge itself?

The English Heritage research report series no. 45-2013 on Stonehenge and its environs, edited by Susan Greaney et al, mentions the archaeological evidence of horses (pages 78-79):

The current consensus seems to be that the presence of any horses in Neolithic and early Bronze Age  Wiltshire is, at best, ‘insecure.’ I do find it intriguing that the single horse bone fragment from the Coneybury Henge upper ditch fills has not been directly dated (Maltby 1990d 153). Coneybury Henge exhibits animal remains of the highest status attributes: a white-tailed sea eagle, a horse and a dog, items fit for the king of Stonehenge in 2750BC. Perhaps, if it is possible, the horse bone fragment will be dated in the future to establish if it is contemporary with the construction date of Coneybury Henge on the hill southeast of Stonehenge itself.

A horse legend exists connected to a site 16 miles from Stonehenge, of a golden, not a white, horse — the desperately elusive story of King Sil ( Zil or Zel), said to be buried in a golden coffin, or upright in armour upon the saddle of a golden horse beneath Silbury Hill. The hill is described and discussed here and here on Eternal Idol.

John Aubrey noted that “No history gives any account of this hill; the tradition only is that King Sil or Zel, as the countrey folke pronounce, was buried here on horseback, and that the hill was raysed while a posset of milke was seething…”

The British and Irish have enjoyed practical and emotional relationships with horses since time immemorial. The recent success of the film and stage productions of war horse, The Horse Whisperer, and universal outrage at the possibility of horse meat in the human food chain are obvious recent examples of the continuing endurance of the emotional bond.  Domesticated horses are notable by their proven absence in the  Stonehenge area prior to the Bronze Age. It seems almost counter-intuitive to me that our Neolithic ancestors in the whole of Britain chose not to involve horses in the affairs of man at that time.

The wikipedia entry for the history of horses in Britain here reveals a complete blank during the Mesolithic and Neolithic periods. Wiki states only:

Groups of wild horses may have roamed certain parts of Britain in the Neolithic period, and our ancestors chose to share the land with them, consciously allowing horses to remain free of the will of men, and undisturbed in the freedoms of pristine nature. Of course, the burning ache of an empty stomach turns the mind swiftly to exploit any readily available source of food.

The predecessors of todays New Forest ponies are said to have inhabited the New Forest, a hunting ground of kings southeast of Stonehenge since before the last Ice Age.

Not only the white horse of Stonehenge, but evidence of horses in Britain generally in the Neolithic period seems as elusive as King Sil and his golden horse. Personally, I feel King Sil is buried close to the mound of the south wind, west of King Barrow Ridge at Stonehenge, clearly a story for another day.