The Harrow Way and Stonehenge 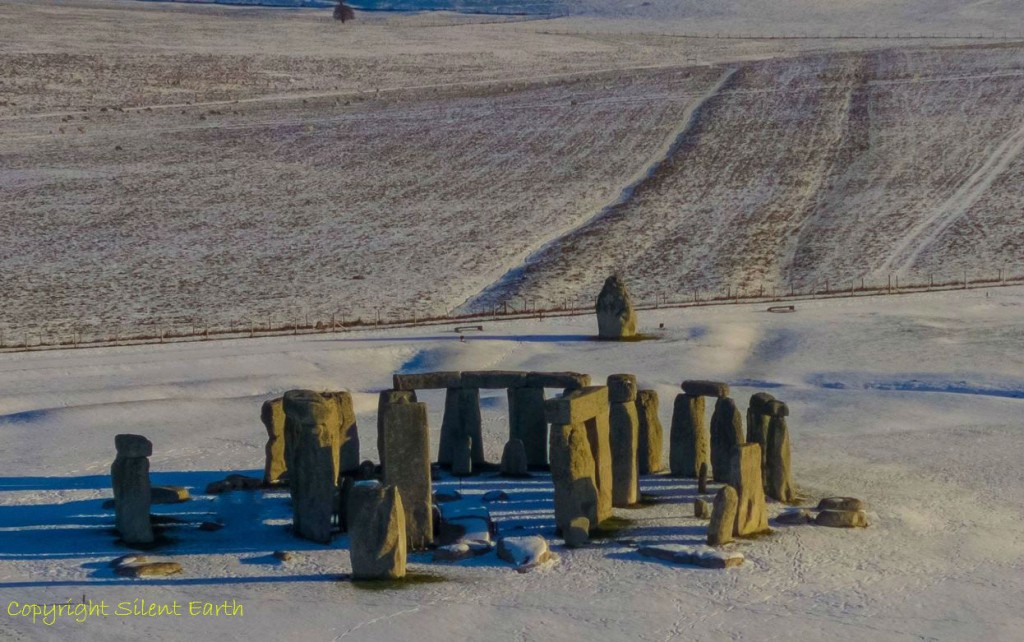 WRITTEN BY Austin Kinsley ON 18/02/19. The Harrow Way and Stonehenge POSTED IN Stonehenge

Sometimes described as the ‘oldest road in Britain’, the Harrow Way (‘Harroway’, ‘Old Way’, ‘hard’ or ‘old’ road) is a trackway of great antiquity running east-west across southern England. My interest in its passage particularly across the Stonehenge landscape and environs was first aroused on reading an article by Alex Down ‘On Trackways and Place-names’, published on Dennis Price’s blog Eternal Idol on August 17, 2013.

L.V. Grinsell’s The Archaeology of Wessex, published in 1958, observes ‘The origin of the name is uncertain: derivations of the name have been suggested from har (hoary with age), herewag (military road), and hearg weg (the road to the shrine or holy place, doubtfully Stonehenge).’

In Aubrey Burl’s ‘Stonehenge‘, published in 2006, he writes: ‘The Harroway led for miles westwards from Dover, Canterbury and Rochester, past Farmham and Basingstoke to Amesbury, then near to Bulford, across a ford whose marshy banks were pink with ragged robin flowers. Then the way rose to Salisbury Plain and Stonehenge. Marvelling bishops and passers-by stared at the impossibly high, weathered pillars understanding nothing about them.’ Aubrey Burl also suggests that the Cuckoo Stone (a sarsen stone west of Woodhenge) marked the route of the Harroway on the western side of the River Avon. He writes that the Cuckoo Stone ‘may have once been used as the builders of the Cursus to become a venerated pointer to the river’, the western terminal of the 1.7 mile Stonehenge Cursus, which was constructed between 3630 and 3375 BC is to the west of the Cuckoo Stone. Burl adds, ‘Similarly, the Heel Stone, once one of a series of antique signposts on the Harroway, was integrated into the Stonehenge complex.’ 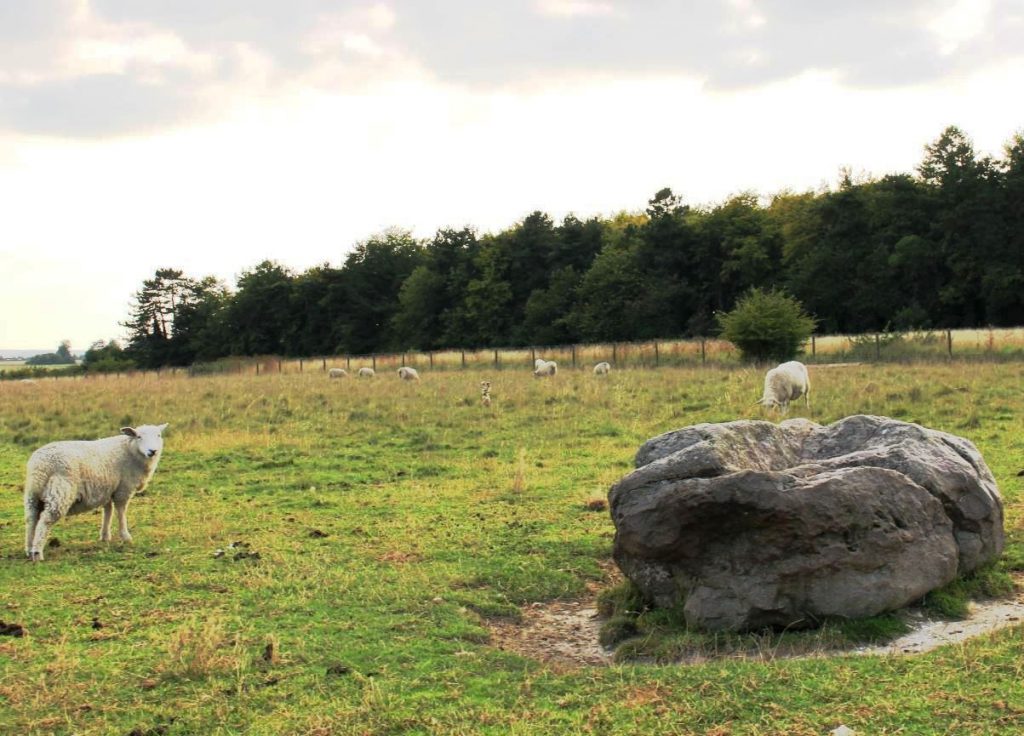 John Chandler and Peter Goodhugh in ‘Amesbury, History and Description of a south Wiltshire Town‘, originally published in 1979, write ‘To the first nomadic inhabitants of Wessex a river meant water for sustenance but an obstacle to be forded. Casual finds suggest activity in Mesolithic and Neolithic times to the north of Amesbury, in the vicinity of Totterdown and Woodhenge, which may reflect an early fording place and the Harrow Way, a trackway of venerable antiquity running east west across southern England, forded the river at Ratfyn, also north of Amesbury’.

The intriguingly named hamlet of Ratfyn is immediately north of Amesbury, and on its western side is bordered by the River Avon (running north-south), between Durrington to the north and Amesbury to the south.

In Stonehenge, A Temple Restor’d to the British Druids, written by William Stukeley and published in 1740, the antiquarian wrote of the Stonehenge Avenue (which he also discovered), ‘the eastern branch goes a long way hence, directly east pointing to an ancient ford of the river Avon, called Radfin and beyond that the visto of it bears directly to Harradon Hill beyond the river.‘  He was unaware at that time that, following the Avenue eastwards from the top of King Barrow Ridge, it quickly bears sharply south to West Amesbury and West Amesbury Henge on the banks of the River Avon, the south-eastern terminal point of the Stonehenge Avenue, and does not travel east to the Ratfyn fording point. However, I do find it interesting that William Stukeley links the Ratfyn fording point of the River Avon with the Stonehenge landscape here, and perhaps his bewilderment hints in fact to a more ancient pathway across the Stonehenge landscape pre-dating even the Avenue. Could this ghost pathway be the route of the Harroway?

Below is an engraving of the view from King Barrow Ridge as originally sketched by William Stukeley on 6th August 1723, looking east towards the River Avon and Ratfyn. Simon Banton observed that the old Devizes to Amesbury road can be seen in the lower central foreground here, and on the skyline is marked on the engraving ‘Haradon Hill’. 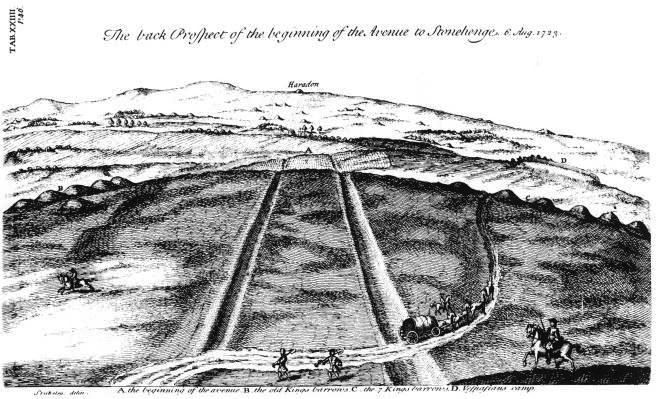 The back Prospect of the beginning of the Avenue to Stonehenge, William Stukeley, 6 Aug 1723

William Stukeley observed of Ratfyn and its fording point on the River Avon that ‘This Radfin-farm seems to retain its Celtic name: meaning a ford or passage for chariots, the old way of carriage here used. Rhedeg currere, rhedegsain cursitare, in Irish reathaim. Fin in the old Irish, is white. It regards the chalky road which went up from the ford. ’Tis a pretty place, seated in a flexure of the river, which from hence seems to bend its arms both ways, to embrace the beginning of the avenue. The place is very warm, shelter’d from all winds, and especially from the north. I am persuaded it was originally a seat of an Archdruid or Druid’ and subsequently, ‘The ford is now quite disus’d, because of the bridge by the town’s end; and the road of it is foreclos’d by hedgerows of pastures on both sides the lane, leading northwards from Ambresbury to north Wiltshire. This road lying between Radfin and the beginning of Stonehenge avenue, is sweetly adorn’d with viorna.

Below: From King Barrow Ridge looking east towards Stukeley’s ‘Haradon Hill’, on 14 February 2019. Alex Down noted in his article ‘On Trackways and Place-Names‘ published on Dennis Price’s  Eternal Idol blog on August 17 2013 that British History online observes ‘The etymology of Haradon Hill, the name used for the summit of Beacon Hill in the 18th century, may refer to prehistoric religious rites.’  here. He also observe ‘It seems a small step to imagine that the name Haradon may be connected with Harroway.’ British History Online also write ‘There are numerous barrows of various types on the downs, and on Beacon Hill there is a cemetery of 70 or more bowl barrows with associated burials and cremations.’ 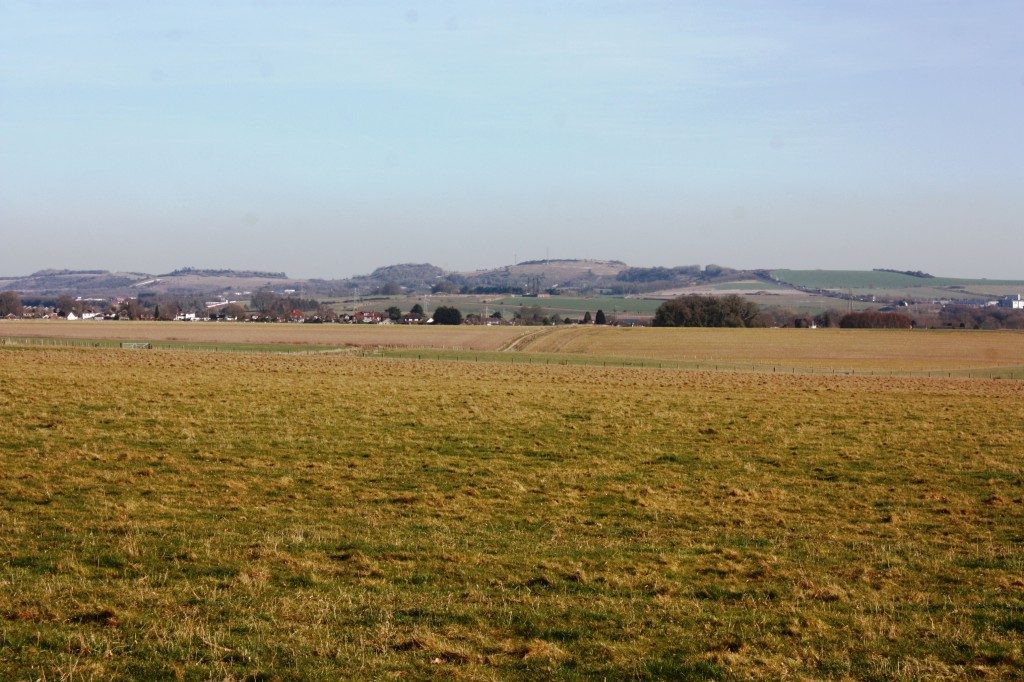 Viewing to the east from King Barrow Ridge.

Alex Down adds in the above article ‘I can determine from the available maps, the Harroway passes directly over what Stukeley called Haradon Hill, and associated barrow (which has now been ploughed out).’ 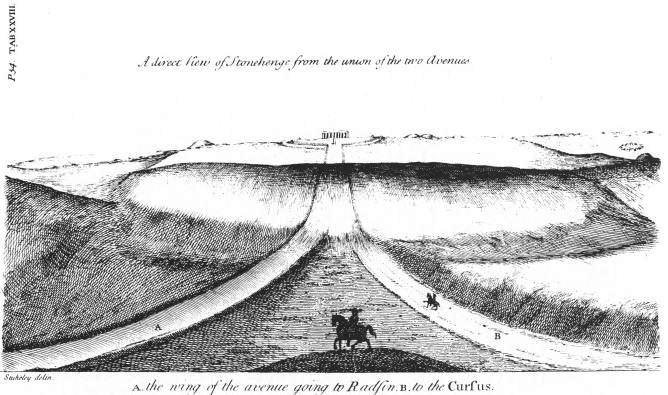 A distant view of Stonehenge from the union of the two Avenues, an engraving from a William Stukeley sketch.

The Victoria History of Wiltshire Amesbury One Hundred Volume XV observes, Ratfyn was not part of the king’s Amesbury estate in 1086 (the estate did include land away from Amesbury itself and most likely covered the Stonehenge monument on the downs to the west of Amesbury). Ratfyn did not, subsequently, belong to a lord of Amesbury Manor until 1841.’ The first recorded owner of Amesbury Estate was King Alfred the Great, and on his death on 26 October 899 AD he demised Amesbury to his son Aethelweard. The estate was subsequently owned by William I (William the Conqueror) and apparently passed with the crown until the 1140s. The specific exclusion of Ratfyn from the Crown’s Amesbury estate hints of established earlier patterns of use, traditions, and ownership of this land. Perhaps even then those uses and traditions involved a pathway of antiquity known as the Harroway passing through Ratfyn and its ancient fording place on the River Avon, which was finally falling into disuse when observed by William Stukeley in the early 18th century.

Below: From the byway on the downs north of Vespasian’s Camp in Amesbury looking west towards a slightly hazy distant King Barrow Ridge, photographed on 14th February 2019. The possible path of the Harroway is just south of this byway as indicated on the map below. 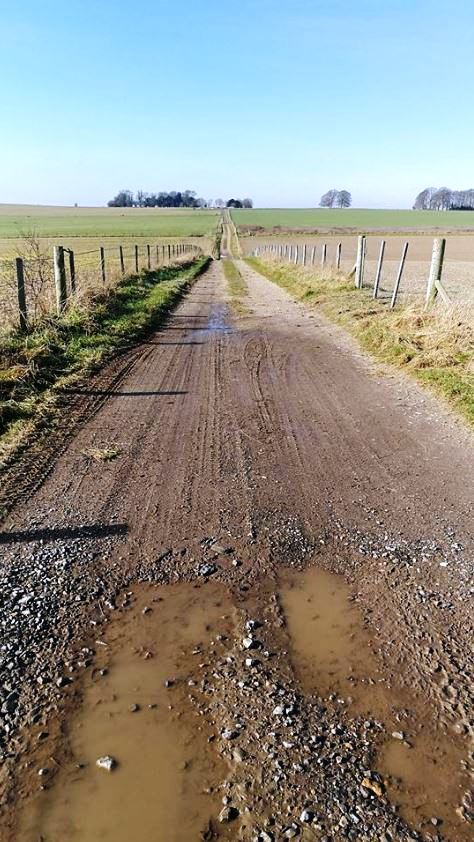 From the byway looking west to King Barrow Ridge.

Below: Further east on the same byway as above to the north of Vespasian’s Camp in Amesbury, looking to the west. 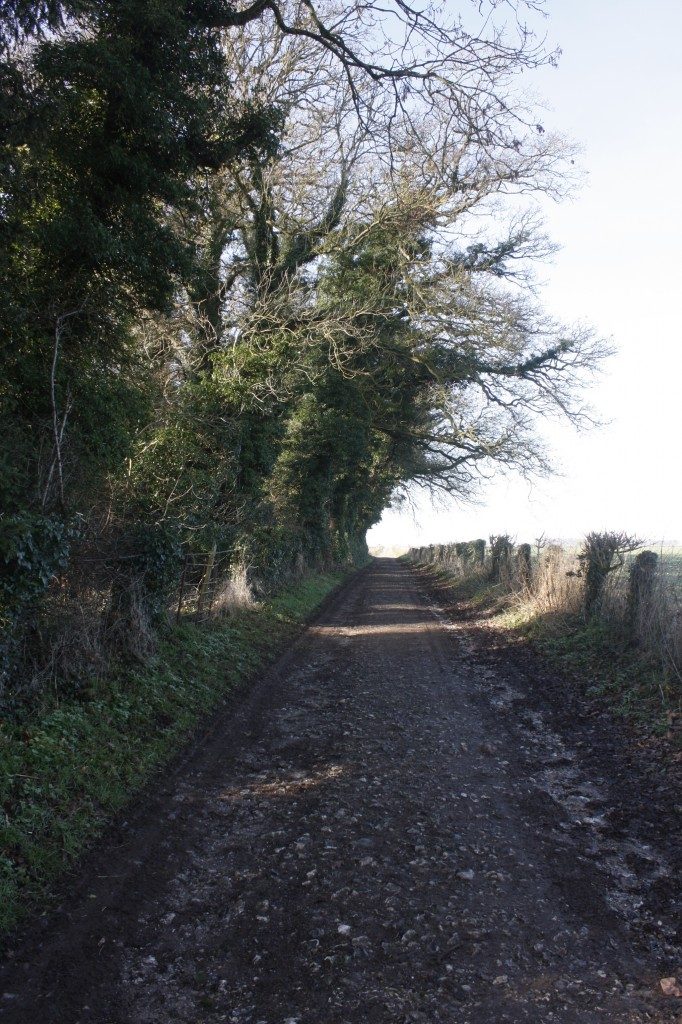 Below: Vespasian’s Camp photographed from the byway on the downs to the NNW on 14th February 2019. The central gap in the landscape here in Mesolithic times could perhaps have been a route for animals, such as aurochs migrating from the north in a southerly direction and subsequently bearing west here (to the right in this photograph) and close to Vespasian’s Camp where Mesolithic man, with supreme levels of co-operation, successfully ambushed and hunted them, resulting in massive feasting fires at nearby Blick Mead on Vespasian’s camp beside the River Avon. Evidence of large feasting fires were discovered by Professor David Jacques during his recent excavations at Blick Mead. Elements of the Harroway may have evolved from the route of earlier Mesolithic animal migration paths through the landscape. I have written previously of the Mesolithic Stonehenge landscape and Professor David Jacques excavations at Blick Mead here. 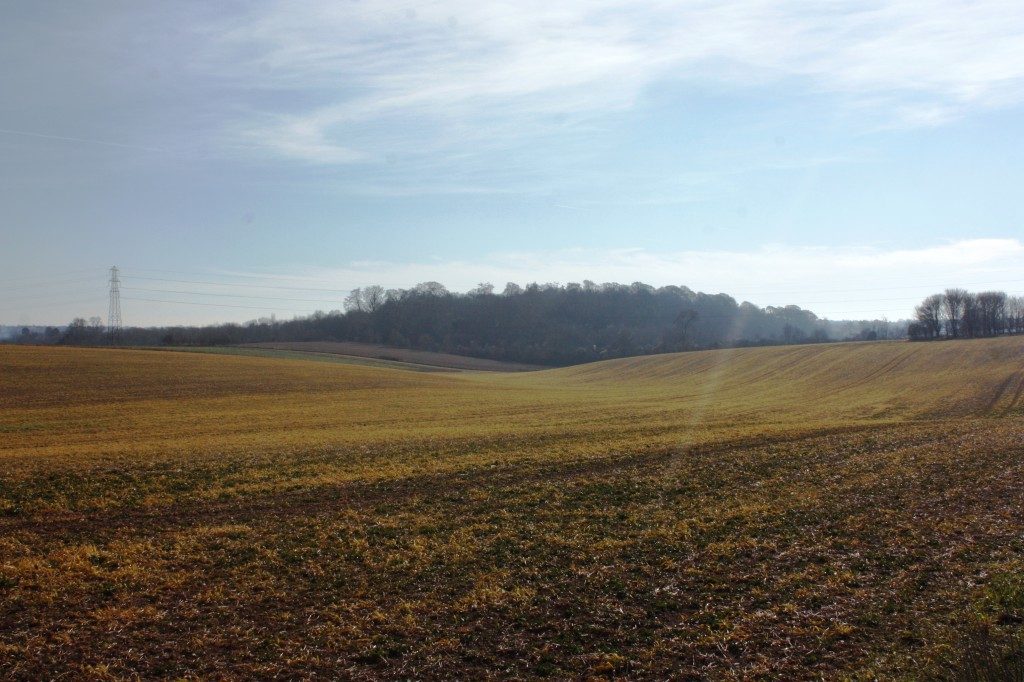 Vespasian’s Camp photographed from the NNW.

Below Vespasian’s Camp viewed from the byway to the north-east: 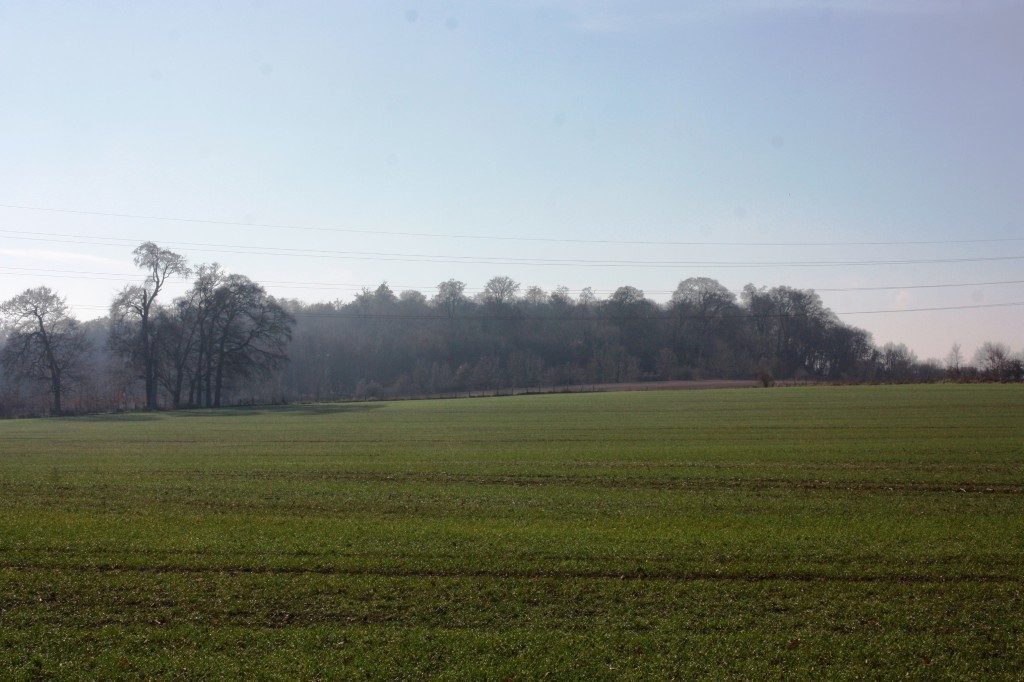 Looking south from the byway towards Vespasian’s Camp.

H.W. Timperley and Edith Brill’s ‘Ancient Trackways of Wessex‘, first published in 1965, observes that the Harroway ‘come(s) up to the Avon at Ratfyn, a little upriver from Amesbury and the site of the ancient ford. The traces of a ford are not visible today but here the water is shallow and it has a good firm bottom. From the Avon the line of the Harroway would leave over the downs immediately north of Amesbury to Stonehenge, and this may have been its termination.’

Below:  My colleague in this research, Timon Greenwood, has kindly marked in yellow on the map below an approximation of the possible route of the Harroway from the east, crossing the River Avon at Ratfyn. We are planning a further field trip to finalise the exact route across the downs here and are currently investigating the possibly that certain of it may be a few yards to the north of how it is depicted below… It is interesting to note the trackway as it travels west from the River Avon, merges with the course of the Stonehenge Avenue at King Barrow Ridge and from there to Stonehenge itself along the course of the Avenue approach. Timon Greenwood adds, ‘Obviously, no straight lines in the Neolithic (or the Mesolithic), but the Old Hard Way did either end at, or pass, Stonehenge. My favourite, and now obvious, route is displayed here. Forget periglacial stripes, imagine aurochs and Mesolithic hunters. Maybe one day they notice they are facing down the animals and the sun rises right in their eyes one midsummer’s morn.’ 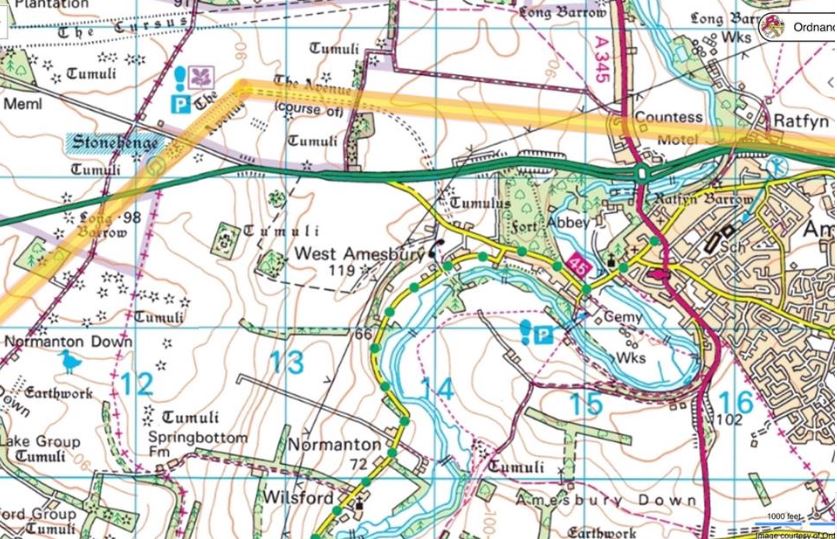 The suggested course of the Harroway from the east across the Stonehenge landscape highlighted in yellow.

The above of course begs the question, which came first: the road or Stonehenge? Perhaps the Harroway ‘the oldest road in Britain’ was a factor in locating Stonehenge where it is, a central meeting point where east meets west in southern England.

Below: The possible route of the Harroway across the hamlet of Ratfyn to the east of the river Avon superimposed on a google earth image. Ratfyn Farm is visible in the upper left of this photograph. The modern day A303 road (marked Amebury bypass) can be seen at the foot of the photograph, running partially parallel to the the route of the Harroway. 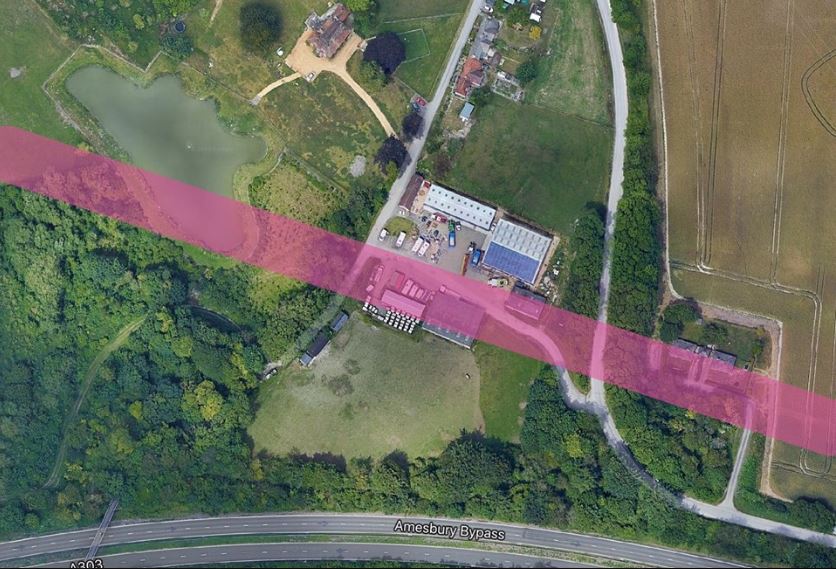 The possible route of the Harroway across the hamlet of Ratfyn

This article is dedicated to the memory of Alex Down, who first inspired my interest in the Harroway and its route across the Stonehenge landscape.

Below: An engraving based on William Stukeley’s sketch of 8th June 1724 looking towards King Barrow ridge from the east.

William Stukeley’s ‘The approach to Radfin, fronting the Avenue of Stonehenge 8 June 1724’

‘Imagination will often carry us to worlds that never were, but without it we go nowhere.’ – Carl Sagan